Dwight: Kobe will make me a better man and player

Dwight Howard vowed to make a change to commit and improve since the All-Star break, and also says that playing with Kobe Bryant will make him not only a better player, but a better man.

Share All sharing options for: Dwight: Kobe will make me a better man and player

Dwight Howard of the Los Angeles Lakers believes playing alongside Kobe Bryant will make him a better man, and a better player, via Ramona Shelburne of ESPN Los Angeles:

"It's going to make me a better man and a better player from watching Kobe," Howard said.

The Playbook: How Kobe and the Lakers came back against the Raptors

Howard has been playing noticeably harder since the All-Star break, and has stated that his conditioning is reaching a level where he can push himself through games, which has had a positive effect on his road to recovery. Howard's pick and roll defense, specifically, has been stellar and was key in the Lakers 25 point comeback victory over the New Orleans Hornets. What changes has he made to improve his conditioning? Howard cut sugar completely out of his diet, via Shelburne:

That meant cutting sugar completely out of his diet so he could get into the kind of shape he needed to be in to be the Lakers' defensive anchor and run coach Mike D'Antoni's pick-and-roll sets.

Dwight's D was key in overtime 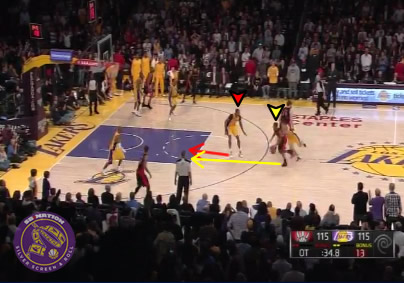 The Lakers pulled out a stunning victory in overtime against the Toronto Raptors. Dwight's defense was key as the Lakers rallied.

Howard revealed that he took time during All-Star weekend to "re-commit" himself to being better in the second half of the season. So far, so good, and the Lakers are only a half game out of the playoffs. The purple and gold have won seven of their nine games since revving up for the final stretch of the season. Bryant has been remarkable as of late, notching back-to-back 40+ points, 10+ assists games while seemingly willing the Lakers to victories. Is Howard learning from it? It appears so, as he acknowledges that Bryant not caring about anything but "going out there and playing hard" is a lesson "a lot of us have to learn", via Shelburne:

"But you look at a guy like Kobe and he doesn't care about nothing but going out there and playing hard. That's a lesson a lot of us have to learn -- especially young guys."

Howard had plenty to say after the Lakers' Saturday practice, so be sure to check out the entire interview over at ESPN Los Angeles.