Battling back from deep deficits, the Lakers showed a lot of heart

Once again, the results of a difficult road back-to-back went as expected for the Lakers, but the means through which they occurred defied all rational prognosis. If this team has proved anything to us, it is that it simply does not give up.

Share All sharing options for: Battling back from deep deficits, the Lakers showed a lot of heart

Should you take any message from the Lakers' last two games, it's that they certainly have quite a lot of gumption, particularly since they left it all out on the court. Twice they rallied back from huge deficits, one falling short because of an elite opponent and another succeeding by virtue of one that was less so. Regardless, the important thing is that this team clearly believes in what they're doing on the court and that is something that we couldn't be sure they had for most of the season. They've dealt with three head coaches all with hugely different philosophies; multiple systems, including one they didn't believe in with the Princeton offense and one that has been changed and tweaked over the course of the year to fit the personnel with Mike D'Antoni's; and a swath of injuries that have mostly robbed the team of the opportunity to develop chemistry. There's a significant gap between this and the championship level of play from a few years ago that they aspire to, but for the team to bring out an effort such as this highlights their changed fortunes in what has been a chaotic season. While their fate is not yet completely in their hands yet, they have at least proven to us that they're willing to give more than a game effort to secure it for themselves.

Kobe and Dwight used the high-screen during comeback 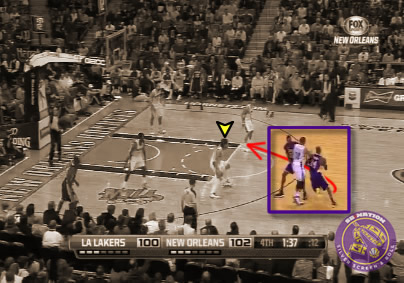 While Dwight Howard led the defense in the Lakers comeback victory over the Hornets, Kobe Bryant handled the offense masterfully. Breaking down how the Lakers chipped away at the 25 point lead.