Dwight: Could have sat till March to improve conditioning

Dwight Howard says that he could have sat out till March while rehabilitating his back and improving his conditioning, but wanted to return as soon as possible to seize "great opportunity" with older teammates.

Share All sharing options for: Dwight: Could have sat till March to improve conditioning

Dwight Howard of the Los Angeles Lakers has been playing on his 75% back since the preseason and recently revealed that he's reflected on the "what if" in regards to sitting out and rehabilitating until March "plenty of times", via Dave McMenamin of ESPN Los Angeles:

Howard said he's thought about what would have happened if he sat out to start the season "plenty of times," but has pushed those thoughts out of his head as the Lakers find themselves in the thick of the playoff hunt, just two games behind the Utah Jazz for the No. 8 seed in the Western Conference."

Why did he play through the injury instead of sitting out and pushing his conditioning back to the levels he's accustomed to? With players like Kobe Bryant, Pau Gasol, and Steve Nash at the back-end of their careers he didn't want to miss the opportunity to play right out of the gates, via McMenamin:

"Looking back on it, I could have sat out the whole season until now and started playing now," Howard said after Tuesday's shootaround in advance of the Lakers' game against the Oklahoma City Thunder. "But I just felt like we had such a great opportunity, and some of these guys' window for winning is very small." 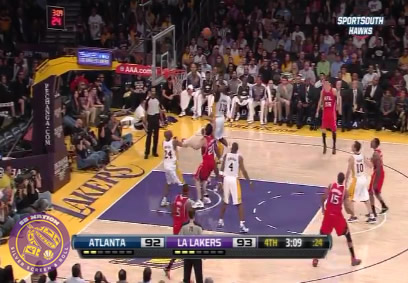 Howard stated that the recent improvement in his conditioning has led to improvements, specifically noting his ability to recover after challenging shots at the free-throw line and sprinting back to clean the glass.

Howard opened up and said that he feels he is starting to reach a point where he can push his body and improve his conditioning , via Mark Medina of the L.A. Daily News:

"Once I reach that limit, I try to push myself to another limit and then ask for a coach for a sub. Then I come back in. That’s the best way to get in shape, to go as hard as you can. Earlier in the season, that was tough."

At this point, just as Howard says, nothing can come from wondering what the outcome could have been had he taken the time away from the court to focus on his own personal conditioning and health. The key is that he is admitting that he is improving while pushing himself harder recently.