If the Lakers make the playoffs who falls out?

LA remains two games back of the Utah Jazz, two and a half back of the Houston Rockets and three and a half games back of the Golden State Warriors for a playoff spot in the Western Conference. One has to fall out for the Lakers to sneak in, so the Silver Screen & Roll crew sound off on which they think it will be.

Share All sharing options for: If the Lakers make the playoffs who falls out?

Will the Los Angeles Lakers make the playoffs? There's been plenty of scoreboard watching lately as the Lakers make a final push for the playoffs, which is something the Lakers and their fans are not accustomed to. Seeing as the Lakers need one of these teams (Houston Rockets, Golden State Warriors or Utah Jazz) to fall out of the postseason bracket, which one will it be, and why? We took to the Silver Screen and Roundtable to discuss the playoff prey.

If advanced statistics are to be believed, the clear cut non-favorite (as in, the team the Lakers are least likely to catch) is Houston. Houston has a home-heavy schedule with more bad teams than good remaining, and they are the only team of the three mentioned which is actually better than the Lakers under all of the predictive advanced statistics like scoring margin and pythagorean W-L. Of course, if advanced statistics were 100% accurate, we wouldn't be needing this discussion in the first place, because the Lakers are clearly better under those measures than Utah and Golden State, and yet they still have a ton of work to do to catch either of those teams. Bottom line though, with Houston both looking the part of a playoff team and having an easy schedule down the stretch, I think you have to take them off the table as a likely candidate to be passed.

From a cold, hard numbers perspective, the Utah Jazz appear to be the team most likely to be caught. They have a negative point differential, and they have by far the toughest remaining schedule of all four of these teams, both from a quality of opponent perspective and a home-road split perspective. But, though the numbers say Utah, I think it's even money that Golden State ends up being the primary target for the Lakers. Obviously, the Warriors have not done well of late (just 3-9 in their last 12 games), but that's not as indicative as it might seem, because their schedule has been brutal over that stretch. Only one, maybe two, of those losses were a surprise. As a result of that brutal stretch, their remaining schedule is extremely home heavy, and they are very good at home. So why, now that I've spent so much time downplaying the Dubs' struggles, do I think they'll continue to fall? Gut. Pure, uninhibited, gut. I look at Golden State and see nearly the exact same team that hasn't been very good for years. They've played very well this season, and they have also outperformed their advanced metrics significantly, but I'm just not convinced that they haven't been more lucky than good. For some reason, I see them as the team most likely to regress from their early season form.

Bold Prediction: I think the Lakers pass them both and end up the 7th seed. 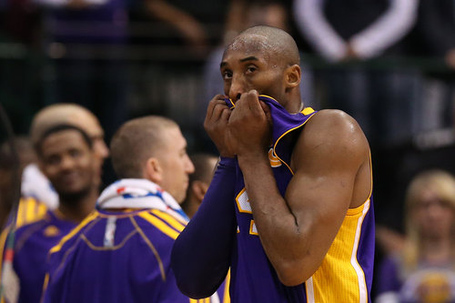 Actuariallly Sound takes a look at the long odds the Lakers face in their playoff chase. Kobe Bryant recently guaranteed the Lakers will make the playoffs. The climb to reach the 8th seed may be more difficult than he realizes.

If you read my playoff chase piece from last week you know that I view Houston as a long shot to catch. Utah and Golden State are probably a toss-up and it wouldn't surprise me if the playoff chase isn't decided until the final game of the season. If forced to pick one team to be on the outside looking in I have to go with Golden State. Golden State may have an easier schedule from an opponents win percentage the rest of the way, but they have to play Houston and the Lakers two more times each and those are teams that are playing much better now than their records indicate. The Warriors are 0-4 against Houston and L.A. so far this season, with only one of those games even being close (a three-point overtime loss at home to L.A. back in December). Given their recent struggles--losers of four straight and ten of their last thirteen--I don't see them righting the ship enough to hold off L.A.

The recent losses by Houston, Utah, and Golden State have improved the Lakers' odds of catching one of them. Unfortunately those odds were given a minor blow this weekend when another injury hurt the Lakers chances. No, it wasn't a Laker who got injured this time, but Tony Parker of the San Antonio Spurs. Parker suffered an ankle sprain and is expected to miss the next four weeks. In three weeks San Antonio plays Golden State (March 20th), Utah (March 22nd), and Houston (March 24th). A Parker-less Spurs team is still no walk-over, but in what is a very close playoff race, it could be the difference between a win or loss. The Lakers don't see the Spurs again until April 14th, a date by which Parker should return. An unfortunate break for LA. That being said, if the Lakers just take care of business against the teams they are favored to beat, they should make the playoffs. They will likely be favored in all but six or seven games down the stretch. Winning all of the games they would be favored in would result in a 45 or 46 win season, a mark high enough to guarantee a playoff spot.

The easy answer here is...no one. Two back with 22 play isn't an insurmountable hurdle, but with the Lakers' poor road play thus far and five (1) back-to-back contests left, it's not the rosiest of forecasts coming up.

But that's not my answer. The Lakers are playing too well, with too much confidence, and have finally been winning the games--home contests and roadies versus lottery-bound squads--that they absolutely have to win. Most importantly, it feels that the team as a whole has a commitment to playing hard every single game, even in a recent loss to Denver.

Out of the teams in front of them, contrary to my midseason post, it seems that the Jazz are the most likely to fall out. I noted that Utah's heavy home schedule in the second half, along with their superior first-half home record made it too difficult for them to lose enough games. Still, the Jazz continue to be a terrible road team with a slightly negative point differential and now an almost mortal 22-8 home record. With half their remaining games away from SLC, Utah will also have to mix in point guard Mo Williams within the next few weeks, a maneuver sure to mess with rotations and overall chemistry.

The Warriors come as a close second as to whom the Lakers can topple, but not for the most apparent reasons. As terrible as the Warriors have been playing recently in losing 10 out of the last 13, 10 of those contests were on the road. The schedule in front of the Dubs seems too favorable for them to fall out: 9 games out of their remaining 21 are against non-playoff teams, and more importantly, only 6 are on the road. However, the Lakers are only 3 1/2 in back of them with two head-to-head match-ups left. If LA can play one game better than the Warriors going forward, a season sweep would put GS in a position where they could very well have completed one of the worst in-season collapses in history. With none left against the Jazz and only the season finale remaining against the Rockets, there's not another situation like this for the Show.

Houston would be third here, and could fall out simply because of their penchant for mammoth winning and losing streaks.

The Jazz are my pick to fall out of the playoffs. Utah has the highest portion of games remaining on the road and recently fell to the eighth seed. The Lakers could hypothetically still catch any of the three teams by the numbers, but they would have to play at an exceptional level for the final stretch of time, which is something we haven't seen from them yet this season. There have been games that the Lakers look sharp, but not weeks. Or, in this case, a month and a half.

The Golden State Warriors will be sitting at home for the majority of the final stretch which will undoubtedly help them even out their recent woes. Of their next 26 games, they will be on the road for only six of them. There is only one "road trip" remaining, a three-game stretch where they visit Houston, New Orleans, and San Antonio. The other three road games are intermittently sprinkled through the remainder of their season. In comparison, the Jazz have two more three-game road trips remaining, along with a two-game road trip to end the season in Memphis, and still have three more games on the road to take care of. Similarly, the Rockets have two three-game trips still on the docket, and also end on a two-game road trip.

Still, it's important for the Lakers to take care of the Lakers and not worry about what the three teams we're talking about here are up to. If the Lakers don't remain focused and continue gaining ground as they have over the last month or so, there's still breathing room for all three teams. It's going to be a tight race and will make for an interesting finish to the season, as we've seen as recently as the game Sunday against the Atlanta Hawks.