Breaking down Kobe's dunk against the Hawks

Kobe Bryant had a monster dunk Sunday against the Hawks. We take a look at why this awesome dunk was awesome, and how it came to be.

Share All sharing options for: Breaking down Kobe's dunk against the Hawks

Kobe Bryant had a monster dunk on the Atlanta Hawks when he drove past Josh Smith Sunday night that helped Kobe on his way to pushing the Los Angeles Lakers back up to .500 on the season. Atlanta gambled on mismatches much of the night which left Kobe to do his part as a primary scorer, or as he said in his post-game interview. that it's his "responsibility to cook 'em" when presented a mismatch on the perimeter.

Let's take look at the anatomy of the play in our journey to discover why this play was awesome (hint: Kobe, jump, dunk).

In the non-sepia zone bordered with purple, basketball magic is about to be take place. Dwight Howard sets a screen and the Lakers are already at an advantage with two bigs for Kobe to break-down. Also under the "why this dunk was awesome" category, the red arrows in the bottom right corner indicate that it is the fourth quarter, the Hawks are up by one, there are two minutes and twenty-three seconds left with only nine seconds left on the shot-clock. 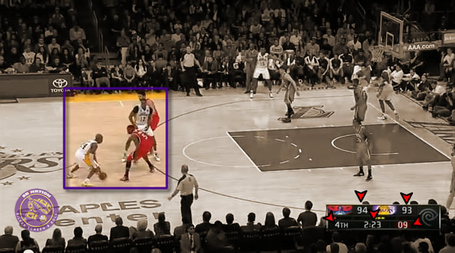 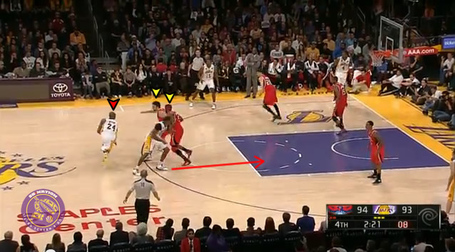 With only six seconds left and not enough separation created through the pick as Pachulia's hedge was strong enough and Smith recovered in time, Kobe is left to take the mismatch and he drives towards the hole in the key Howard drove back with Zaza. 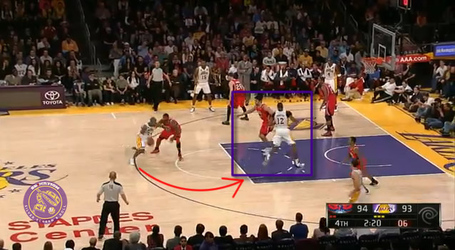 THE PLAYBOOK: More Lakers breakdowns from The Playbook archives

Howard has Pachulia tied up in the restricted area, leaving him to be an innocent bystander. Dwight played the role of full-back here and created a gap in the defense for Kobe to burst through, giving Kobe room as he gets a step on Smith. 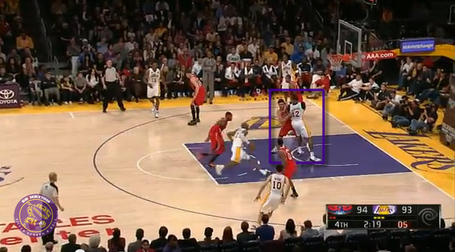 Smith recovers well enough and gets into the air with Kobe, though at this point Kobe is already ahead of Smoove and airborne. Baseline, there are roughly four photographers prepared to snap this moment. 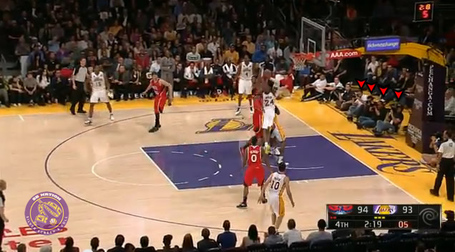 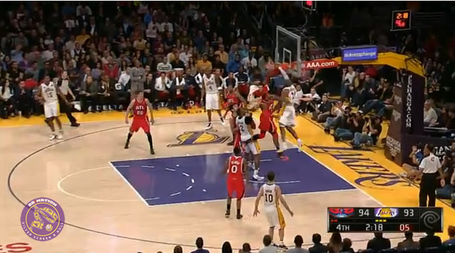 Pachulia and Howard have an enviable view of the dunk. 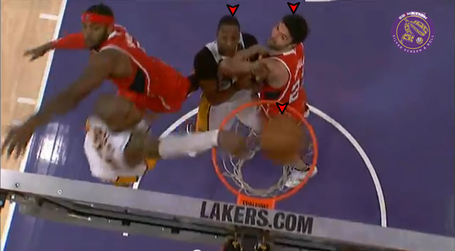 Smith has a pretty good view as well, however. 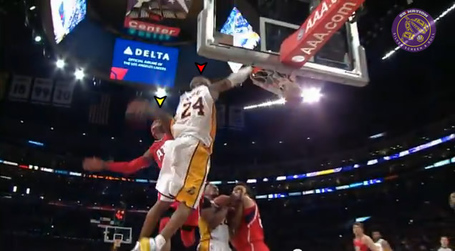 *If the GIF and the breakdown don't do enough, NBA.com has video of it on their YouTube channel as well.

It was a big-time moment in a regular season game that kept the Lakers on pace with the Houston Rockets for playoff seedings, but more importantly, it was an awesome dunk. And we love dunks. Kobe ended the night with 34 points on 13-of-27 shooting, which wasn't extremely efficient, but it was the plays he did make that will be the lasting image from the Lakers victory over the Hawks. This dunk, along with a buzzer-beating venom-creating shot from downtown, and another mismatch drive that ultimately became the game-winning layup made for an exciting game. Or, as Kobe explained in four letters and a hashtag, #Vino.