Hawks at Lakers Preview: A breeze through the window

The Lakers can reach the elusive .500 mark on the season tonight when the Atlanta Hawks pay a visit to Los Angeles. In a best case scenario, the Lakers could end the night only 1.5 games out of the playoffs.

Share All sharing options for: Hawks at Lakers Preview: A breeze through the window

The Los Angeles Lakers continue their playoff push with a Sunday evening game on their home court against the Atlanta Hawks. For the remaining 23 games the narrative going into a Lakers game will be similar. The Lakers must defeat W teams because they are X games behind Y team for the Z seed. The changing tide, however, is that the Lakers who were seemingly 3.5 games behind the 8th seeded Houston Rockets are now 3.5 games behind the 6th seeded Golden State Warriors. The Warriors have come down from a hot start are have now gone 3-10 over their last 13 contests.

That window to the playoffs is still a tight one, but it's fair to acknowledged the progress that's been made in the standings. Like a cool breeze through the stagnant air of an unkempt room this Lakers team has been trapped within. There's still plenty of work to be done, but there's been progress in the standings at the very least over the last month to get them to this point. 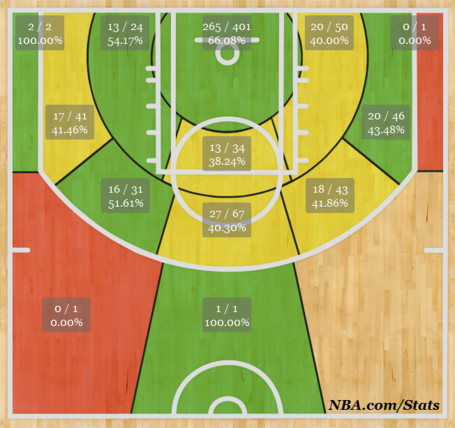 A quick glance at Al Horford's shot chart this season with the Atlanta Hawks shows why he's averaging a career high 17.2 points per game. His great shooting percentages are hampered only by the over 10% drop in free-throw percentage this season.

Now, the Hawks come to town, and they've gone 7-3 over the last ten games. They last played the Phoenix Suns on Friday and picked up a loss on the road. Al Horford has been on an absolute tear over the last month. Over the last eight games he has scored 20+ points, and in that stretch he had a monster 34 point, 15 rebound, and 5 block effort, along with a 23 point and 22 rebound game. Horford is averaging 24.8 points and 13.4 rebounds per game over the last eight games.

The Lakers bench, and three-point shooting, could be in for another big game. While the Hawks are fourth in the league in three-point field goal percentage, they are 29th in the league in opponent's field goal percentage from beyond the arc. The Lakers just put on an absolute clinic against the Minnesota Timberwolves and likely could have made 50% of their shots still if they had turned backwards, while blindfolded, and just tossed the ball over their heads towards the rim. There have been a handful of awe-inspiring shooting nights this season for the Lakers, and of course, a handful of GAH-inspiring shooting nights as they couldn't accurately throw a quarter a foot down a hallway had they tried.

SILVER SCREEN AND ROLL: Bynum still affects the Lakers from 2,300 miles away

Besides the big man showdown between Horford and Dwight Howard, another pairing to keep an eye on is Jeff Teague and Steve Nash. Teague has had a big year for Atlanta and could cause serious issues for the desert fox. On the season Teague is averaging 14.4 points per game on 45.6% shooting from the field, along with 7.1 assists. However, much like Horford, his most recent stretch of games have been impressive. In the last 11 games Teague has had at least 20 points seven times (19 point in one contest). During that period he served up at least seven assists in 10 of the contests (four double-digit assist games).

Where the Lakers should do the majority of their damage is on the glass, however, as the Hawks rank 27th in the league in rebounding. Atlanta is particularly awful at creating second-chance points off the offensive glass, where in related statistical news, they also rank 27th in the league. It will be incredibly important for the Lakers to cut down the second chance points, as everyone's favorite three-point shooter Kyle Korver is shooting an absurd 46% from deep, and will likely be standing on the perimeter warming his hands while the remaining players on the court are skirmishing for rebounds. The Lakers defense is still a hot mess (not all that dissimilar to the new Jack in the Box creation, except it was never a hit hair-metal song), and second-chance points from offensive rebounds have been a season-long issue.

The Rockets will nearly be wrapped up with their game against the Dallas Mavericks by the time tip-off is ready at Staples. With a Rockets loss, and Lakers victory, they'd pull a full game closer to the playoffs. Either way, this is yet another opportunity for the Lakers to reach the almighty .500 mark on the season when they get to work in their Sunday whites.

- Peachtree Hoops has all your Hawks info.