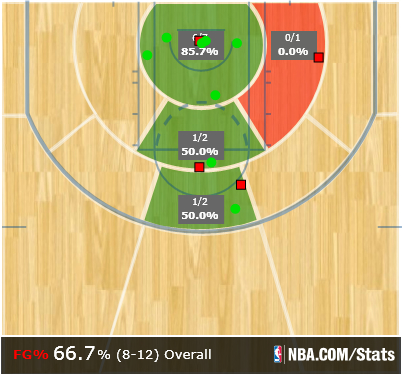 Gasol was very effective in Minnesota, taking the majority of his shots near the rim.

Pau Gasol has returned to the Los Angeles Lakers after tearing the plantar fascia of his right foot and is back with the starting lineup. After multiple barbs had been shot between Mike D'Antoni and Gasol in regards to Gasol's role with the team there's been little to no talk of that with Gasol being inserted into the starting five. Right, wrong, or otherwise Gasol will need to pull his weight in order for the Lakers to flourish under such circumstances, especially with another injury setting the roster back as Metta World Peace will miss at least six weeks with a knee surgery.

In his first two games back Gasol looked out of sync and struggled from the field, but Wednesday night in Minnesota looked like a player who could contribute in a big way.

Gasol's game has regressed. It's not just system, it's not just coaching, it's legitimate regression. He's gotten older, he has a seven-foot frame to hold up, and he has minutes beyond his time in the states playing in the NBA. There's been a struggle with philosophy, but with a nearly full season of sample size to pick apart, it's cleark.

Pau Gasol is no longer the mid-range player he once was. He isn't even remotely close.

The Lakers absolutely need to find him in the post, and Gasol needs to assert himself and not settle for mid-range jumpers going forward. Yes, every now and then the opportunity will certainly present itself for Pau to take an uncontested 15 footer, but that needs to be cranked down to a second or third priority on Pau's checklist.

Pau showed up as good Pau offensively against the Timberwolves. With his defense showing it's severe limitations, his offensive abilities will need to cover a great deal of ground in order to make him an asset on the floor, which isn't out of the realm of possibilities. Obviously, the rust is still shedding itself from his lengthy absence, but the numbers throughout the year outside of the prior three-games also support that Pau needs to force the issue in the post.

Early in the game Pau made sure to assert himself on the block, especially against a smaller defender in Derrick Williams. The Lakers must take advantage of the height advantage they have in order to make Pau being on the floor payoff, and Pau must convert over smaller players. It's a two-way street, no doubt. 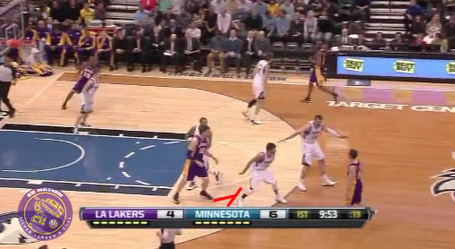 Both Ricky Rubio and Williams move to trap Steve Nash. 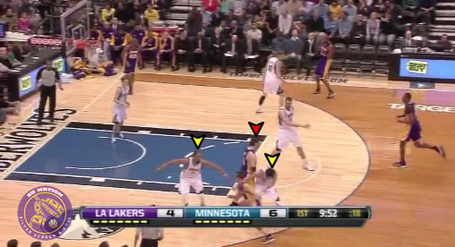 Pau sets himself at the elbow, one of his comfort zones. 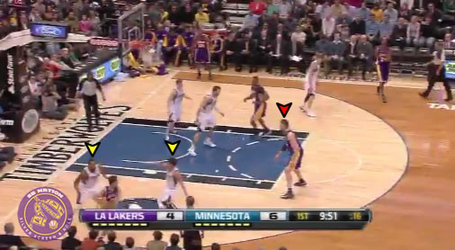 The shot is expected at this point, but he actually pump fakes and drives straight into the low-post where he can do damage on the smaller defender. 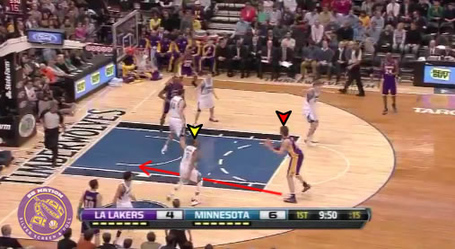 His seals Williams deep in the post and turns baseline. 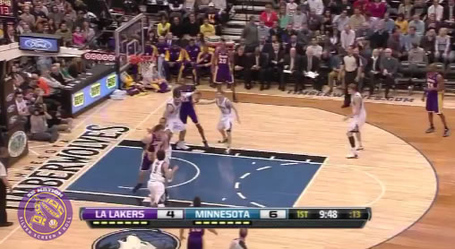 How sweet it is. A great sequence for Pau, and a great example of the importance of Pau making the effort to get down low instead of settling. The Lakers will need that to maintain their grip on the eight seed and going into the playoffs. 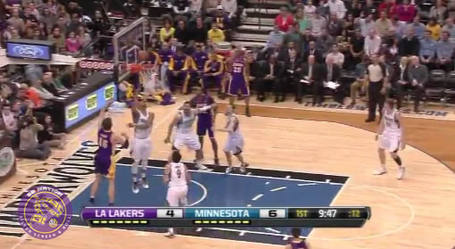 Plays like that show the versatility of Gasol, and why it's important for him to find a comfort zone in an offense that isn't necessarily going to force Pau into that position. The high-screen will be there plenty for Pau, and while he did pop, he didn't stop there and made it work.

We saw the "bad Pau" at Golden State, and at home against the Washington Wizards as well. Wide-open mid-range jumpers that weren't falling. Little assertiveness in driving to the rim like the above play. That needs to be cut down, though the expectation will be that once Pau finds his rhythm he should be sinking those shots. That seems like a probability, but in reality it's far from the truth. All of the following jumpers were misses in Golden State... 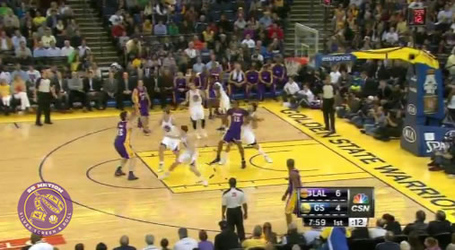 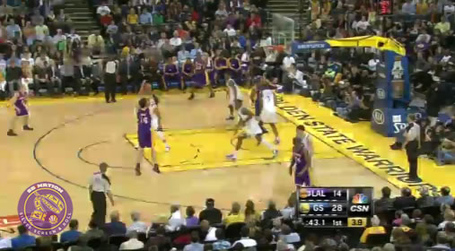 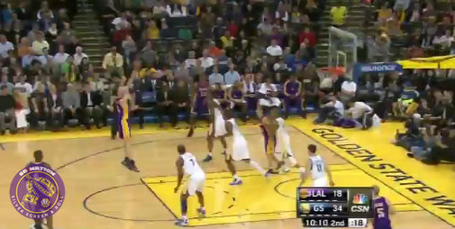 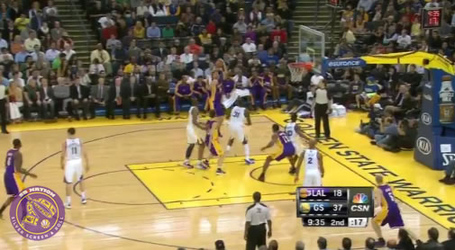 None of those jumpers were contested, yet none went in. Before we go any further, it's time to take a look at what Gasol's numbers look like this season in comparison to his phenomenal 2010-2011 season from the field. 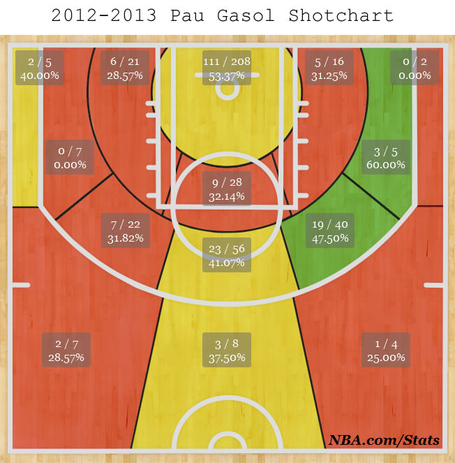 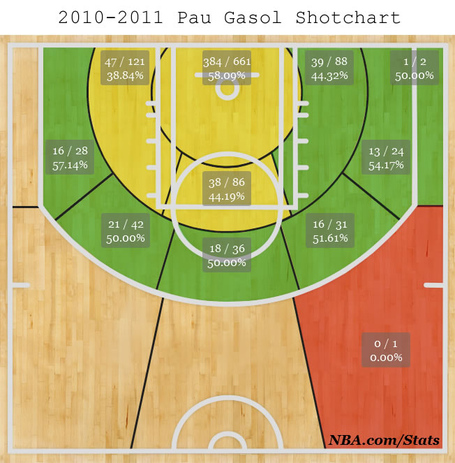 It's clear that if Gasol still had that level of mid-range prowess the Lakers offense would be a completely different beast. Unfortunately he isn't dialed in the way he was back then, and if anything those shotcharts look as if they came from two entirely different players.

Gasol has missed a high amount of what should be considered high-percentage shots this season which had very little to do with the "system" and very much to do with his inability to hit the mid-range like he once could. A problem that has made working the two big-man offense trickier than before, but a solvable puzzle nevertheless. Let's take a closer look at the shot data. 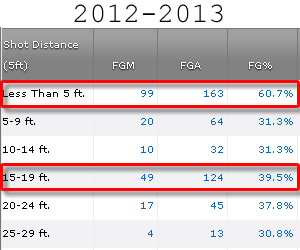 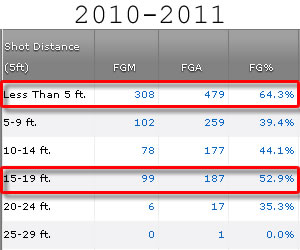 From less than five feet Gasol has only taken a four percent dip, which isn't drastic. It's across every other range where Gasol has regressed beyond recognition. In particular, his 15-19 ft. numbers are atrocious in comparison. The other piece worth noting is that the amount of field goal attempts he is taking is drastically less. Why? For one, Gasol played in all 82 games in 2010-2011, but has played in 39 games in 2012-2013. His usage rate, however, is very similar both years. This season Gasol is pushing a 20.2 usage rate, while in 2010-2011 he had a 21.8 usage rate.

Also worth noting? In 2010-2011 Andrew Bynum played in 54 games while averaging only 27.8 minutes per game. Gasol was essentially the center through the season. For comparison's sake, here are Dwight Howard's numbers on the year. 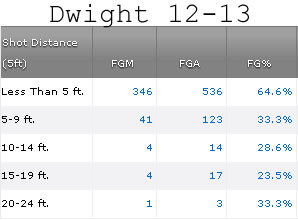 The Lakers are actually getting Dwight more looks within five feet of the rim than Gasol had through 2010-2011, and Dwight has played in only 66 games.

To clarify and provide more visual evidence of where Gasol should be finding the majority of his shots, let's take a look at a few more visualizations of what is clear by the percentages. 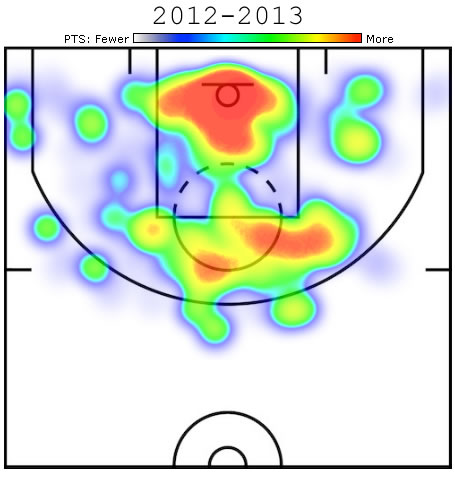 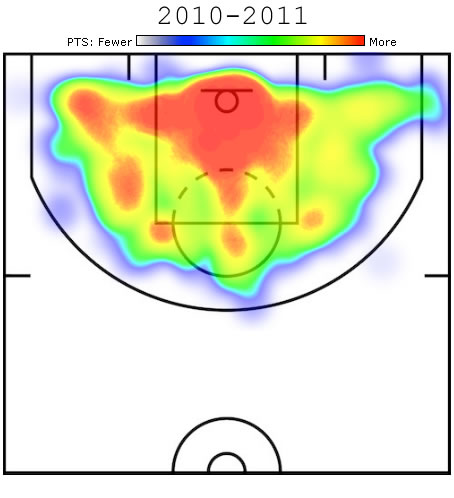 Old habits die hard, and both Gasol, the Lakers, and the coaching staff need to recognize just how hard this mid-range exercise is dying and adjust accordingly. If the Lakers need to get some stretch-four help to spread the floor they need to lean on Antawn Jamison to provide the pick and pop thread and clear out the paint for the bigs. Overall from mid-range, Gasol is shooting only 36 percent while shooting 63 percent around the rim. 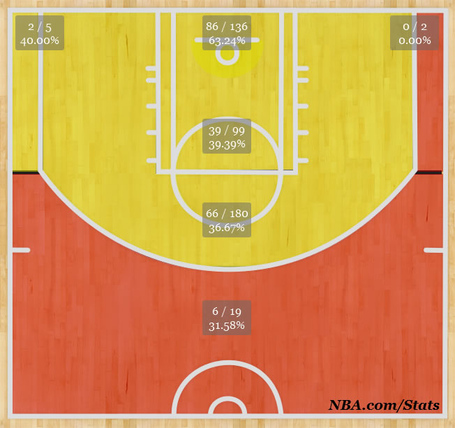 It won't be easy to break the habit with such little time left in the season and the Lakers needing wins more than supreme efficiency tweaks, but both go hand-in-hand. 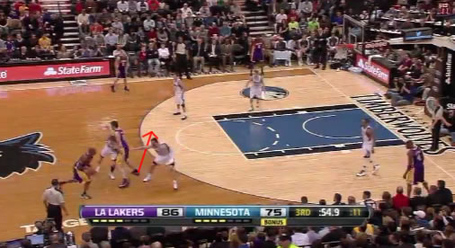 He pops to the top of the arc where he has a clear path to push closer to the rim. Even more important, if he does move to that open space, one of two Timberwolves' defenders would be forced to collapse on Gasol, leaving someone open on the perimeter. Gasol is also a great facilitator and can serve as an in-between from the perimeter to spread a defense even thinner while also neutralizing the need for cross-court passes that are high risk. 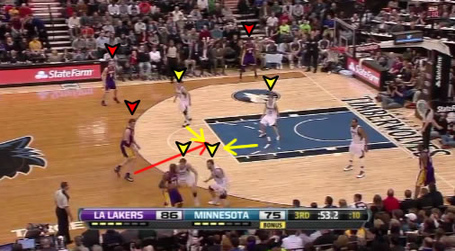 He doesn't, though, and settles for an extremely inefficient shot with his feet on the three-point line. The shot went in, but that's not the kind of look the Lakers' offense needs from Gasol. 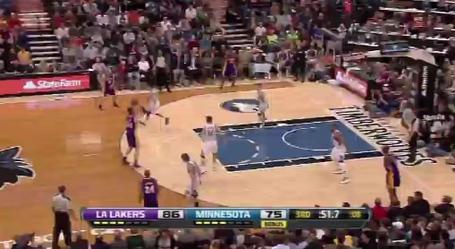 The Lakers move the ball up-court in transition. 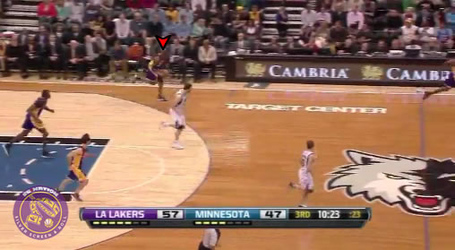 Gasol doesn't spot up in the mid-range, but goes into the post to once again pick on Derrick Williams. 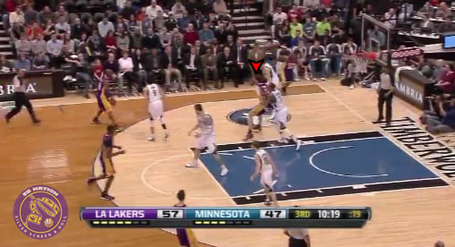 He faces Williams up, but doesn't settle for a mid-range jumper here, once again forcing his way to the rim. 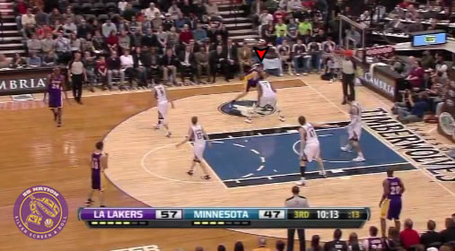 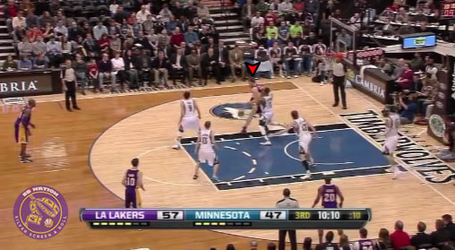 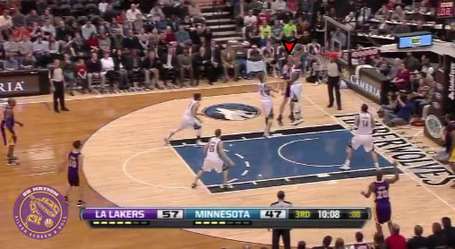 Looking at Pau Gasol being more effective in the post isn't revolutionary -- he has always been lauded as a great post-player. Looking at just how deteriorated his mid-range game has become though makes it clear that the Lakers desperately need to play to Gasol's strengths. Mike D'Antoni knows it, states it, and now has to stick to it to finish out the Lakers season.

It's now up to the team to figure it out, but the numbers, charts, and eye tests all point to one thing. Put Pau in the post, his efficiency elsewhere has fallen into the abyss.

- Shot Charts credited to both NBA and Basketball-Reference

- Canis Hoopus probably got hacked by Kobe at the end of the game.