Lakers at Warriors preview: Hitting the road to close the season

The Lakers being a four-game road trip tonight in Golden State. After a second-half meltdown against the Washington Wizards, can they bounce back and get back to playing a better brand of basketball as they've shown since the All-Star break?

Share All sharing options for: Lakers at Warriors preview: Hitting the road to close the season

The Los Angeles Lakers were coming off of three-days worth of rest. They were bringing both Kobe Bryant and Pau Gasol back into the fray. They were playing the Washington Wizards. They had an 18-point lead. They were at home.

And then, they were disappointing.

The Lakers look to pick up the pieces of the momentum they decided to shatter when they allowed the Wizards to launch shootaround jumpers while they watched from a distance. Poor rotations, poor awareness, and poor execution down the stretch amounted to the Lakers giving us all a chilling reminder of the team that was flopping like a fish out of the water prior to the All-Star break resurgence. A charge out of the gates that was borderline believable until the two losses they served up yanked the emergency brake.

Heading up to Golden State to face the Warriors won't be an easy task for the Lakers. After dropping a game that they had in pocket (a pocket with a hole, apparently) at home, they now hit the road for the next four games before returning home to face the Dallas Mavericks. The Mavericks, mind you, are currently tied with the Utah Jazz for ninth in the Western Conference (though Utah has the tie-breaker), making the next five games for the Lakers even more incredibly important.

Though that's something we knew already. With such a slow start the final weeks of the season received a plethora of "must-win" game labels to place on the calendar. Dropping a few of those up to this point has shrunk the margin of error even further. Yes, the Lakers have a two-game lead over ninth place, but a two-game cushion isn't much at all. 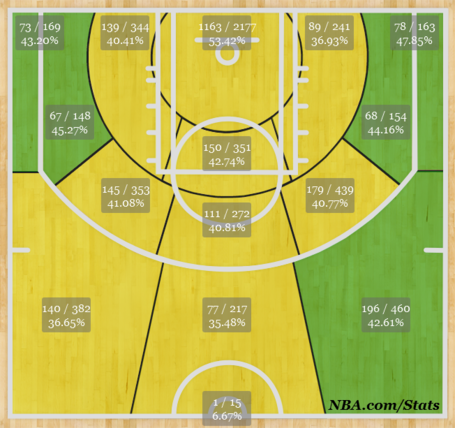 Golden State is a team that can, and likely will, expose the Lakers inability to defend the perimeter. They are the top ranked three-point shooting percentage team in the NBA, putting up 40.2 percent as a team. As the Lakers exhibited against Washington, and throughout the season, their lack of commitment to sticking to their man in both half-court sets and transition is a weakness that can doom them should they face a team that is proficient at making wide-open shots. Trevor Ariza, a career 32 percent three-point marksman, put up a career night from beyond the arc when he dropped seven long-range bombs on his former team.

Stephen Curry is considered "questionable" for tonight's game, but is expected to play. Curry left the fourth quarter during the Warriors win over the WIzards on Saturday, but x-rays were negative. Similarly, Antawn Jamison is expected to play through a "slight tear" in his wrist that he suffered during the Lakers loss to the Wizards, which is worth keeping an eye on. Jamison has been a key-contributor off the bench for the Lakers and it certainly hasn't been because of his defense. His scoring ability has been a breath of fresh air, not because he has some semblance of a three-point shot, but because he has been far and away the best off-ball Laker.

Los Angeles plays four games between tonight and Saturday, all on the road, with a back-to-back smack dab in the middle. A huge week with only twelve games remaining in the regular season is on the horizon, and the Lakers would do us all a solid with a win to kick it off.

The Lakers will be in action against the sixth seed Warriors, while the Utah Jazz head home and host the Philadelphia 76ers. Houston is inactive tonight, as is Dallas.

- Golden State of Mind is your destination for Warriors information.