With the return of Pau Gasol to the line-up, Earl Clark saw his minutes significantly curtailed. While he has been slumping lately, a few minor adjustments to his game could warrant more minutes for the young forward.

Share All sharing options for: Earl Clark - Odd Man Out

The return of Pau Gasol Friday night solidified the Lakers rotation which, barring further injuries, will likely remain unchanged the rest of the season. Unfortunately Gasol’s return also appears to signal the relegation of Earl Clark back to the bench. After playing at least 20 minutes per game for the last few months, Clark saw the court for only 7 minutes Friday night. With Kobe Bryant playing half his minutes at the small forward position, as the Lakers try to get shooters like Jodie Meeks and Steve Blake on the court, there simply aren’t enough minutes left to split amongst five front court players. Earl Clark appears to be the odd man out.

Clark was forced into the line-up when both Gasol and Howard were injured and his surprisingly strong performance has been a bright spot in an otherwise gloomy season. While he has struggled recently and come back to earth from his incredibly hot start, he still has the potential to be a big part of the Lakers future going forward. It is well known within the analytics circle that the most efficient shots in the NBA are shots at the rim and from beyond the arc. General Manager and data analytics fanatic Daryl Morey built the Houston Rockets team around this exact principle and they currently have the 4th best offense in the league while maintaining the 3rd lowest payroll. The true benefit of the developments in data analytics is not just the improvement in player evaluation, but using analytics to drive player development and team strategy. It is this next step that would pay dividends for Earl Clark.

Clark has numerous strengths that should keep him on the floor. Surprisingly he is the second best defensive rebounder behind Dwight Howard, posting a higher defensive rebound rate than Pau Gasol and even Jordan Hill. His assist rate and block rate are both higher than MWP and Jamison. So why is he finding himself stuck on the bench behind the other two forwards? I believe it is due primarily to his offensive rating which is behind the aforementioned players. The main reason for his relatively poor offensive rating is his shot selection. 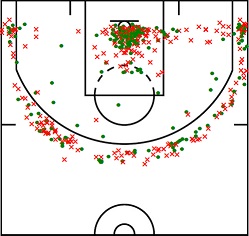 If asked whether Antawn Jamison is as efficient of a scorer as Ryan Anderson, the vast majority of people would say no. Jamison is merely an average three-point shooter (35%) relative to the sharper marksman Anderson (39%); however, when looking at effective field goal percentage, Jamison (55%) is more efficient than Anderson (53%). The reason for the difference is shot selection (see shot chart to the right). Jamison may not be a great shooter, but he is great at shot selection. It is quite evident that he takes the vast majority of his shots from the two most efficient areas on the court and avoids any shots from the least efficient locations (mid and long range two point jumpers). His focus on catch and shoot threes and finishing lay-ups on cuts leads to an efficient shooting percentage and a low turnover rate, a combination which has Jamison owning the 3rd highest offensive rating on the roster. It’s the main reason why he, despite his poor defense, still warrants time on the floor. 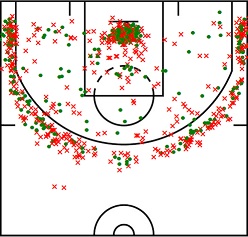 Similarly, Metta World Peace has adopted a relatively efficient form of shot selection in terms of location, even if quality of shot (e.g. step back contested jumper) is somewhat concerning. Like Jamison, roughly 3 out of 4 of his attempts come at the rim or from deep. His field goal percentage at the rim is relatively poor at only 59% (Jamison by comparison is a very solid 67%). His three-point shooting is 35% which, while not equivalent to that of a sharpshooter, does produce a 52% effective field goal percentage and is better than the Lakers as a whole. His mid-range game, however, is quite poor (33%) which is why his avoidance of such attempts is critical to his offensive game. Maintaining offensive production that isn’t harmful to the Lakers is all he needs to justify his time on the court given his solid defensive skills (4th best defensive rating on the roster). 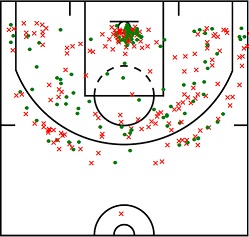 This is where Earl Clark needs to adopt the shot selection mentality of Jamison and MWP. Currently, Clark’s field goal percentage by location resides somewhere in between the other two forwards. He is respectable at the rim (62%) and from deep (34%) while his mid-range game (38%) is in line with league averages. The problem for Clark is that he takes almost half of his shots from that mid-range area. It is a stark contrast to that of Jamison and MWP. If Clark were to adopt the lay-up or three mentality, with 75% of his attempts from those areas, his eFG% would rise by 4% to 53%. That is right in line with the often coveted Ryan Anderson. It is a simple correction but it would provide huge dividends for LA.

At present, Clark is being squeezed out of the rotation and it is most likely because he has the lowest offensive rating of the front court players. It’s unfortunate because he also has the 2nd best defensive rating on the roster. Having an athletic 6’10" power forward with the ability to defend multiple positions would be boon to a team that struggles to move quickly and rotate defensively. If Clark can adopt the shot selection mentality that the analytics community endorses, he would arguably be the best two-way power forward on the roster. He may not make that transition this year, but it bodes well for his future that he is only a minor adjustment away from being the type of power forward the Lakers need to fill out the roster in upcoming seasons.