Breaking down Kobe and the Lakers' awful defense against Washington

The Lakers played horrible defense against the Washington Wizards and Kobe Bryant stands at the center with a handful of damning mistakes.

Share All sharing options for: Breaking down Kobe and the Lakers' awful defense against Washington

Friday night the Los Angeles Lakers reminded us all of everything that had taken place prior to the All-Star break. With their five-man lineup of Dwight Howard, Pau Gasol, Metta World Peace, Kobe Bryant, and Steve Nash together once again, they fell to the Washington Wizards despite building an 18 point lead at home.

Still, even while letting the Wizards back into the game, the Lakers had a great opportunity to win a game they did nearly everything they possibly could to lose.

While Los Angeles had spent much of the night moving the ball well, eventually those wild passes morphed into turnovers. Overall, the Lakers had 27 assists on 39 made field goals, but turned the ball over 17 times. Those turnovers served as a door jam that allowed the Wizards to waltz right in and take the victory.

It wasn't just the turnovers, however, it was the defense. Rather, the lack of defense. The Lakers again showed just how unorganized they can be on defense, and Kobe specifically made a handful of cringe worthy gambles and decisions that crippled the Lakers down the stretch. Time to relive the nightmare!

We've been down this road before. Over the course of the season it's almost become a shrugging point, as Kobe's off-ball defense is expected to be poor. Sometimes the gambles work, but mostly they work against the purple and gold, which was the case Friday night. The immediate narrative response is "well his ankle". but no. A sore ankle doesn't create poor decisions defensively, which is exactly what the state will present in the following pieces of evidence.

Kobe Bryant over-helps while he ball-watches, leaving his man alone on the perimeter while Wall has a clear path to pass the ball for an easy basket. 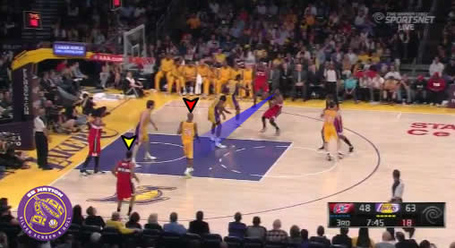 Kobe swipes at the pass but to no avail. 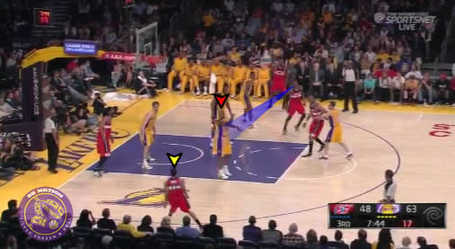 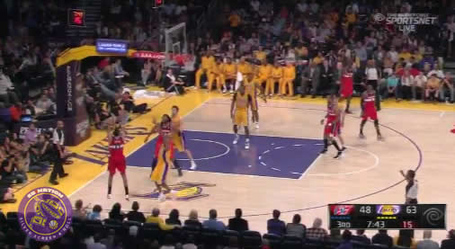 While Kobe is obviously watching for the dribble penetration that Wall was creating, both Howard and Gasol are in the area to deter him. What the two bigs can't do, however, is protect the perimeter.

In this play the Wizards moved the ball exceptionally, but the Lakers were still in position to defend this play properly. 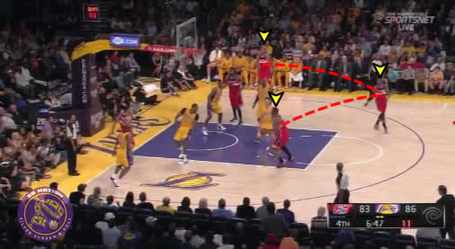 Both Kobe and Nash run out to defend the three, only one player needed to close out on Wall. Ideally, Nash would pick Wall up and Kobe would immediately split to Ariza in the corner. 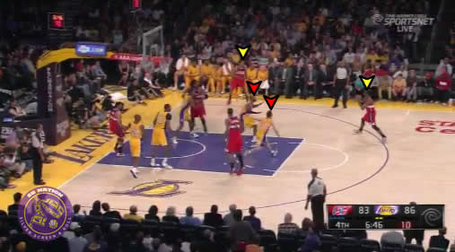 Wall zips the pass over to Ariza who hits the three ball. Kobe attempted to recover, but it's way too little way too late. Had Nash and Kobe split this could have been averted. A huge shot for the Wizards, who tied the game at 86 with this long-ball. 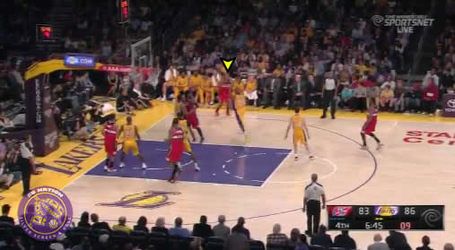 Here, Metta is prepared to help Nash on the driving wall. Kobe is watching the ball while his man sets up in the corner. 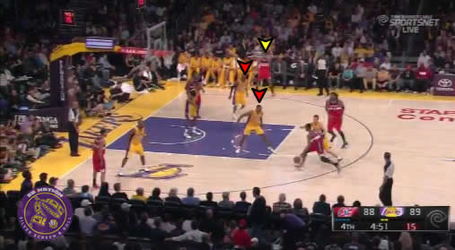 Wall jumps up to pass the ball and Kobe gambles as he flies into the passing lane to Nene. 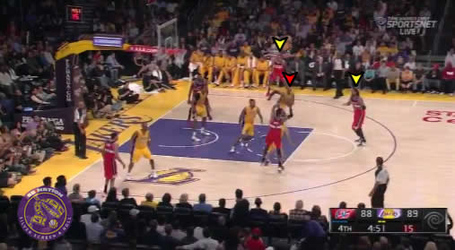 Wait, you meant to tell me the Wizards kicked it out to an open man on the perimeter? Why yes, they did. This leaves Metta to cover a ton of ground. Had Kobe stuck with his man Metta could still had recovered onto Nene should the ball reach him, and there'd be no open man. But there it is, another open corner three. 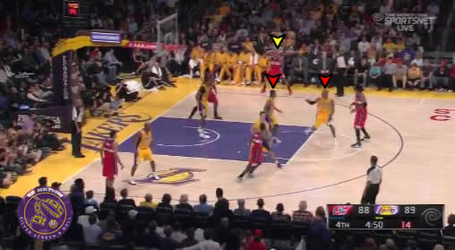 Metta tries to get back to Ariza, but there's simply too much space. Ariza hits the three and puts the Wizards up two. 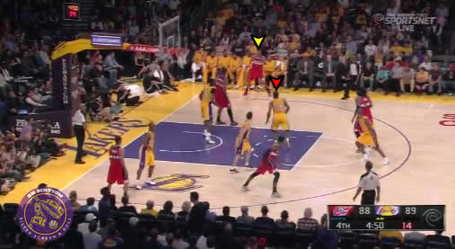 As a final piece of evidence, the state would like to introduce Exhibit D. Up one with four minutes to go, the Lakers still have the game in hand if they focus through the final stretch and play defense. Kobe goes up for a layup... 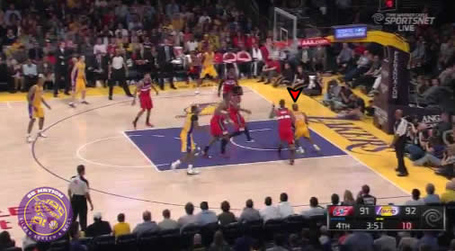 ... and misses. Upon landing he looks at the ref, complains, swings his arm, and watches the other nine players on the court dart up the floor. 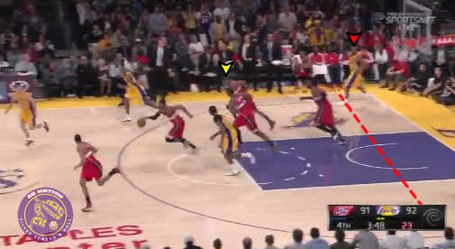 There are four Lakers up the court by my count. Ariza is getting ready to set up along the arc and Wall has already pushed the defense towards the paint with his dribble penetration. 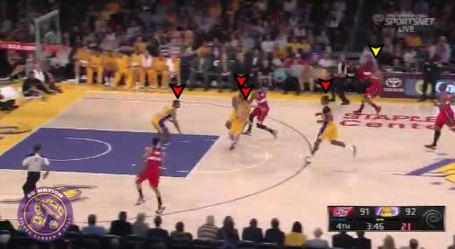 Another wide open three. There are still only four Lakers set up defensively as Kobe hasn't crossed half-court yet. Washington takes a two point lead. 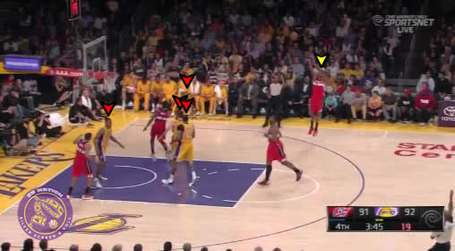 The Wizards were moving the ball reasonably well, particularly John Wall who had a career high 16 assists, but assists don't come without open shots, which the Lakers gave plenty of to Washington. Overall, the Lakers' team defense looked like an abomination on hardwood. The Wizards could have caught up on Game of Thrones before it starts up again next Sunday if they had their smartphones on hand while they were throwing up warm-up field goals.

Jodie Meeks, I see you. I also see no man near you. Pull a card. 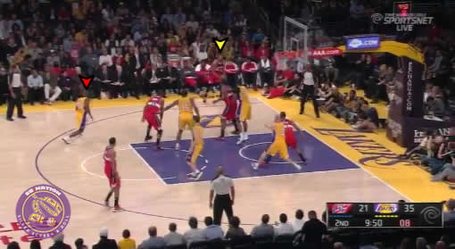 Yes, another wide open corner three. While it looks like the same disgusting slop as Exhibit E, the Lakers managed to reproduce the same terribleness. Consistency, as they say.

Ok, probably not, as it doesn't take much magic to strip the Lakers down defensively. The Lakers sunk into the paint and left the perimeter players to their own devices throughout the night, and while they did build up a lead despite this flaw, it eventually caught up and smacked them in the face.

Yes, that's John Wall in the air making a play. Meeks is hanging out in the paint with the rest of his teammates while Trevor Ariza prepares to drain another three on his way to a career night from beyond the arc. 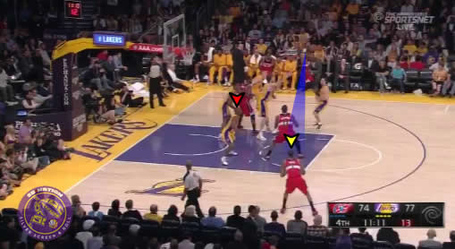 Jodie recovers but is late, as Ariza already lined up his shot and caught it in rhythm. Another three for Ariza. 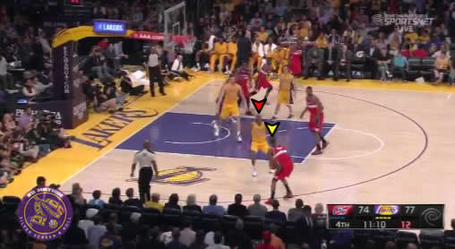 At least Meeks made an attempt to defend after realizing the predicament he was in. Unlike this next shot. 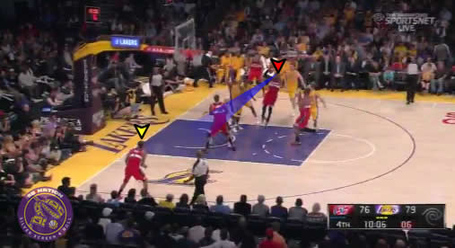 At least they are protecting the paint? 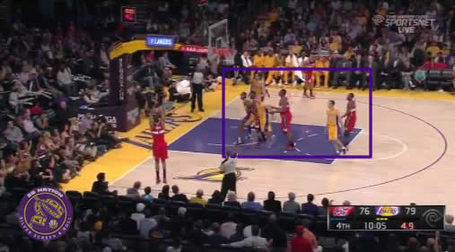 The state would like to present Exhibit E, just in case Exhibit H and G were not enough. 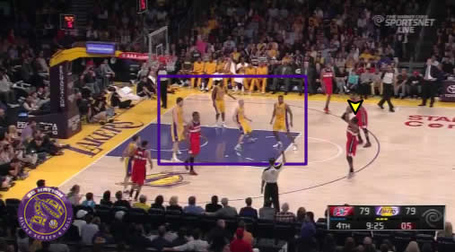 But the Lakers still had a chance!

The Lakers threw this game to the wind, but still had an opportunity in the final moments to pick up a win they fumbled away. The Lakers relied on the Dwight-Kobe high-screen down the stretch but the Wizards did a great job of covering it and forcing Kobe into tough shots. 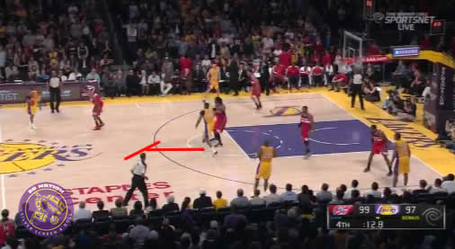 Nene doesn't step out and is ready to stop Kobe while Ariza recovers. 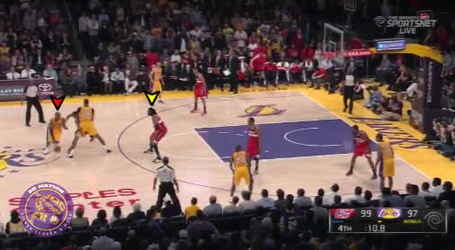 Ariza turns the corner on the screen but Kobe is already in isolation mode with Nene. Nene does a phenomenal job staying with Kobe and digging in defensively. 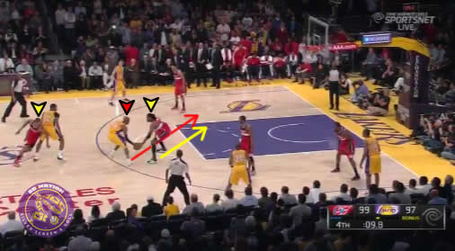 Dwight begins to roll towards the rim but Ariza out-works him and actually stops Howard from getting to the rim. 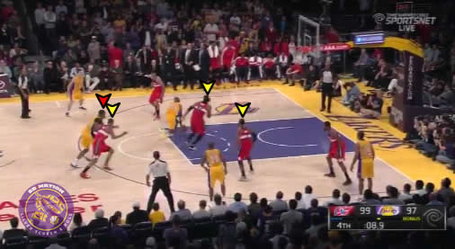 Ariza gets down and boxes Howard out in the middle of the paint, a great defensive play that altered the offensive set entirely. Kobe settles for a contested jumper and misses.

With eight seconds on the shot clock this wasn't a shot that Kobe needed to take by any means. He could have swung the ball over to Nash, who then had an option to take the shot himself or move it over to Meeks. Unfortunately that was not on Kobe's mind and the shot is a no-go. It wasn't a "terrible" shot, but with Nene playing great D, it certainly wasn't the easiest either. 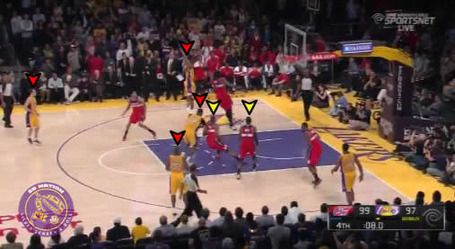 - Credit to My Synergy Sports for providing game film