Lakers at Suns preview: Lakers have to keep winning without Kobe and Pau

The Lakers have taken control of their season and have the opportunity to win their first back-to-back series of their 2012-2013 campaign.

Share All sharing options for: Lakers at Suns preview: Lakers have to keep winning without Kobe and Pau

The Los Angeles Lakers head out of California as they face the Phoenix Suns on the road in the second half of their back-to-back. The Lakers have yet to win both games in a back-to-back but once again have an opportunity to do so. After Sunday night's win over the Sacramento Kings where Antawn Jamison scored 27 points on 9-of-14 shooting while grabbing nine rebounds, winning without Kobe Bryant -- who is considered doubtful in Monday night's contest -- may not be an unattainable reality while he continues to focus on treating his ankle.

More on Jamison: Can Antawn Jamison be the stretch four the Lakers need?

This road game against the Suns was also supposed to be a potential return-date for Pau Gasol, but after suffering a minor setback, he is considered out until Friday at least. With both Kobe and Pau out, the Lakers must win games without the two players who have served as gatekeepers for L.A. for the last four years. They have to play above and beyond, but they've shown they are a capable team as they grow together.

Mike D'Antoni's eight-man rotation has now dwindled down to seven to Devin Ebanks' detriment, but the role players continue to find their groove since the All-Star break. Even more important, and obvious, Dwight Howard has become more and more active and, quite frankly, amazing to have on the floor. His rebounding numbers have been astronomical since he re-aligned himself during the All-Star break, and his defense has been all it was billed up to be more so than an expensive bill after a lousy dinner.

With an 11-3 record since hitting their stride in the second-half of the season, the Lakers continue to push their way into and up the playoff picture. Now equipped with a full game lead ahead of the Utah Jazz, their sights can now fall onto the Houston Rockets who are just a half game ahead of Los Angeles.

The Suns will also be short-handed with Marcin Gortat out indefinitely due to a foot injury. They are currently on a four-game losing streak having last lost to the Washington Wizards on Saturday in a contest where they gave up 127 points, without overtime. In fact, over the last six games, the Suns have given up at least 105 points in each game, while twice giving up over 120. The Lakers should be able to take advantage of a team that is marred in turmoil, much as they have been throughout the season, but as we saw just a few weeks ago winning in Phoenix shouldn't be considered a gimme. Especially if Shannon Brown decides to play a Metallica air-guitar solo on Howard's arm again. 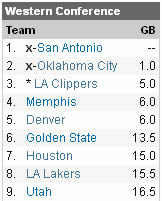 Both the Jazz and Golden State Warriors are in action tonight. The Jazz host the New York Knicks, who will likely be without both Tyson Chandler and Carmelo Anthony. The Knicks have been in a skid over the last two weeks and will be going into Utah just a day after being handled by the Los Angeles Clippers. Golden State heads to New Orleans to face the Hornets.

Tame Impala - Be Above It

- Bright Side of the Sun has the latest on the Phoenix Suns, who no longer have a lotto pick in the bag from the Lakers.