Breaking down Jamison's dagger against the Pacers

How did the Lakers close-out the Indiana Pacers Friday night? With Antawn Jamison hitting a big three, of course!

Share All sharing options for: Breaking down Jamison's dagger against the Pacers

The Los Angeles Lakers picked up a giant win Friday night on the road against the Indiana Pacers in a game that seemed against all odds. With Kobe Bryant having to call it early after being unable to play on his sprained ankle, the Lakers' leaned on their role players to push them.

And push they did.

The Lakers fell into a hole, climbed back, and took the lead in the fourth quarter. Sound familiar? Steve Blake, Antawn Jamison, and Metta World Peace were all instrumental in the Lakers' comeback. Perhaps no play was bigger in sealing the deal Friday than Jamison nailing a three in the final minute of the fourth quarter. How did the Lakers get such a clean look at the basket? Why, Horns, of course. Let's dissect the play!

The Lakers set up in horns (both bigs at the elbow, corner's loaded), which has been a rarity since the injury to Pau Gasol. Jamison is going to step down to set a screen but slip it and pop out to the three-point line. 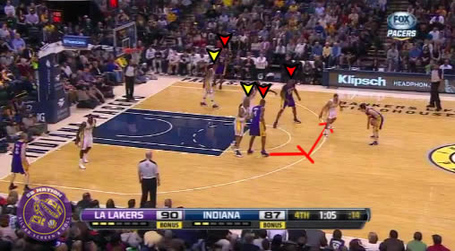 This is where the magic happens. Jamison slips between the two defenders and parks at the line. Dwight rolls to the paint, causing Roy Hibbert to sink to the rim with him. David West hedges hard to deny Steve Nash's dribble penetration. Which leaves no man to cover Jamison for the Pacers. Paul George is tied to the corner with Metta World Peace. 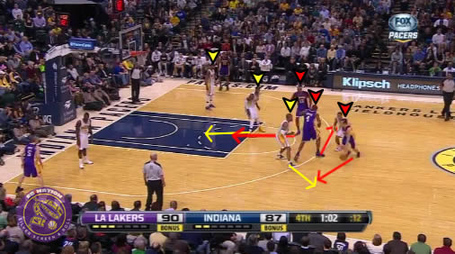 Howard and Hibbert push to the rim. Nash pops up and immediately finds Jamison ready to accept the pass. 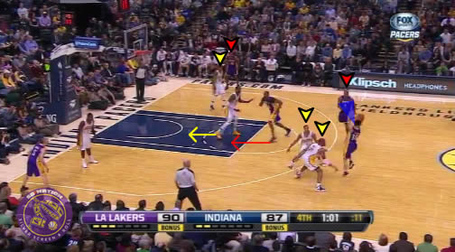 George recovers to help on Jamison, but has a ton of ground and two men to cover. Hill sprints back to challenge the shot. 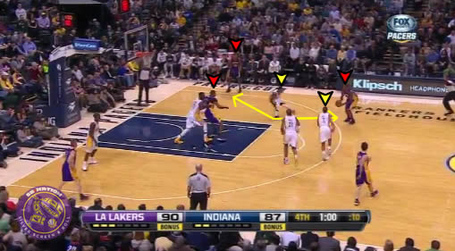 Paul George bounces back towards Metta as Hill challenges the shot, but it's too late. Jamison nails the three and the Lakers push their lead up to six. 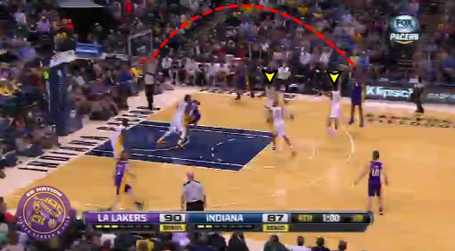 The Pacers chose to trap Nash instead of leaving David West on an island with him. George Hill could have immediately rotated onto Jamison, but instead left him to take an easy shot from the arc. With the motion the offense created by utilizing Howard's diving, Jamison's popping, and Nash driving out of the slip pick and roll, the Lakers caused enough havoc to create an open shot that helped ice a tough road game.