The NBA league office has reviewed the play in which Kobe Bryant was hurt.

The NBA League office reviewed tape on the no-call when Dahntay Jones undercut Kobe Bryant and claims that the replay "confirmed that referees missed a foul call" as Jones "did not give him the opportunity to land cleanly", via NBA.com:

After review at the league office, video replay confirmed that referees missed a foul call on Jones as he challenged Bryant's shot and did not give him the opportunity to land cleanly back on the floor. Bryant should have been granted two free throws.

Jones clearly left Kobe no space to land cleanly, causing his leg to land awkwardly, and ultimately giving him a severe ankle sprain: 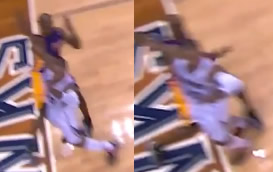 Since the initial injury, a source close to the Lakers believes that the chance that Kobe will play in the next two games is "not good", which leaves Monday's game in Phoenix a potential target for the Lakers.

In the meantime, Kobe intends to put his "big boy pants" on, which I assume means he will be in a triathlon tomorrow morning to "test" the ankle.