The Lakers played out their brief road back-to-back in line with expectations, winning against Dallas and losing a tough game against Denver. Although each game is precious from this point on, the Lakers played well enough that one can still have confidence in them moving forward.

Share All sharing options for: The Lakers' brief road trip went as expected

The last few games have been typified by Kobe scoring explosions, but more than anything, it has been a testament to the team's fortitude. Whatever other problems the team has been encountering, they are finally managing to deal with them as a unit. It has no doubt helped that Mike D'Antoni has settled on an eight man rotation and one should not discount the value of players having consistent roles and responsibilities night after night. Earlier in the season, the Lakers would have gotten much more flustered against an epic performance by a star player like Dirk Nowitzki or Denver's relentless transition attack. Yet in these cases, the team overcame foul trouble to Dwight Howard and largely kept the deficit to a manageable level respectively. Naturally, we still return to the theme we keep on hammering time and time again: consistency. Effort, execution, and urgency. It may sound horribly cliched after receiving the same diagnosis in nearly every item of Laker analysis, but that's the reality of their situation. They're running the same plays as earlier in the year, just with more pep nowadays, and that has to continue. 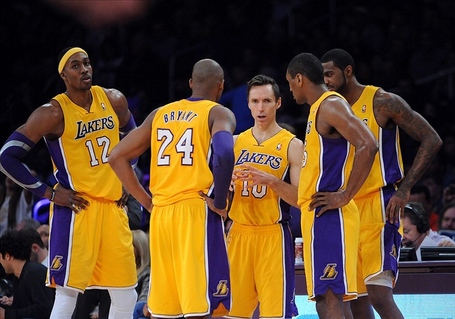