NBA action has come to a screeching stop now that All-Star weekend has ended. The Western Conference all-stars won in an entertaining game tonight, with Chris Paul gnabbing the MVP award.

All-Star weekend has come to an end with a competitive and entertaining All-Star game. Two members of the Los Angeles Lakers-- Dwight Howard and Kobe Bryant-- took part in the exhibition game. The West came out victorious, with Chris Paul of the Los Angeles Lakers Clippers picking up the MVP hardware with a spectacularly spectacular 20 points and 15 assists. Kevin Durant led all scorers with 30 on the night. Carmelo Anthony led the East with 26 points.

Dunks, dunks, dunks, and a few more dunks. In short, the West had 88 points in the paint. Kobe Bryant ended the night with 9 points, 8 assists, and some intense defense on LeBron James in the final quarter of the game that turned in two highlight blocks. Dwight Howard played 14 minutes, hit a three pointer, and had 9 points with 7 rebounds.

Anyway, it's time for some shuteye in regards to NBA action, especially here in our neck of the woods, as the Lakers aren't playing again until Wednesday. The trade deadline is closing in, and the rumors and speculation are only going to heat up going forward. Instead of wrapping up the All-Star game with words, the fine folks at the mothership SB Nation NBA have all of the GIFS. ALL OF EM!

Block one of two that Kobe had on LeBron. @GotEmCoach summed up the sequence nicely in 140 characters (or less!)

When an unidentifiable mascot thing is thirsty, what better place to get in a few laps to quench that thirst than Shaq's shiny head?

When Blake Griffin is being credited an assist for saving you from a terrible interview... yeah, it's been a bad season.

Something about off the backboard dunks gets me, but this is just a monster jam. 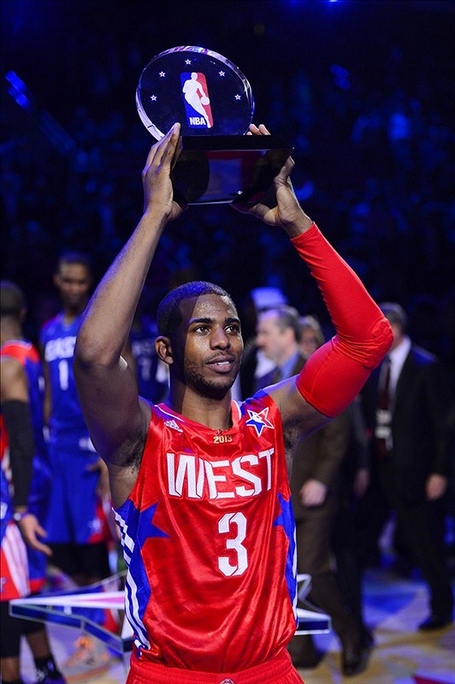 Anyway, the SB NBA guys killed the coverage of the All-Star game, and you can catch the above GIFS and much more in their stream right over here.

Hopefully everybody enjoyed the casual weekend of NBA basketball and the Lakers can come back recharged for the second half of the season. We'll keep the ball rolling here till the Lakers take the floor again. Till then, I'll just be watching Kobe playing defense on LeBron like a mad man.