The Lakers are finally home in Los Angeles after going 4-3 during their seven game road trip. Reflecting, and breaking down, the so-so journey.

Share All sharing options for: Reflecting on the Lakers seven game road trip

The Grammys are over and the Los Angeles Lakers are allowed back into their residence in Staples once again. The seven game road trip is now in the books with the Lakers coming out on the other end with a positive record. 4-3 is certainly better than 3-4, but this road trip was wearing on a team that needed a positive, lasting, catalyst.

Instead, the Lakers found themselves without Pau Gasol for a minimum of 6-8 weeks, putting him out nearly the remainder of the season. While the Lakers did string together the aforementioned four wins, it wasn't pretty by any means. Dwight Howard's fragile shoulder became an issue once again, turning it into a short-term and long-term concern for both the Lakers and Dwight.

So, what did the Lakers show us over these last seven games on the road? A few points of interest from the journey.

Metta World Peace has been a disaster

After starting the season strong for the Lakers with his weight cut and health in line, Metta World Peace was a walking atrocity during the seven game road trip. His percentages were blinding, and not in the "that's a sparkly diamond you have on there" sense, but in the "OH GOD DON'T LOOK" kind of way.

In the seven game road trip, Metta shot 28.4% (21-74) while averaging 10.6 attempts per game. Even worse, of his 31 field goal attempts from deep, he made a mere 22.6% (7-31) of them. For a Lakers defense that has trouble slowing down just about any offense, their own offensive efficiency must be through the roof in order to keep pace. Losing Pau Gasol put's even more stress on a team lacking players who can make plays on the offense, which has in turn heightened importance for players like Metta World Peace to step up and contribute. During this road trip he made an effort to take on more of the offensive load, but it turned into a disastrous stretch.

There comes a point where the Metta must be held accountable for his shot attempts, which is starkly against Mike D'Antoni's philosophy of "shoot if you feel it". 28.4% from the field is enough of a red flag to reconsider.

It has been long documented and dissected this season that Dwight doesn't look anything like the Dwight that many had hoped for. Just as well documented is how he isn't healthy, and during this trip he certainly added more to the "damaged goods" department. When the Lakers played in Brooklyn he sat down with Stephen A. Smith and revealed his back is only at 75%, and his legs tingle and go numb during games. Before that, we were all reminded of his glass shoulder when Shannon Brown hacked at his "bad" arm and he re-aggravated his shoulder.

In the midst of a media hurricane with the Lakers, Dwight was unable to silence any of the criticisms being lobbed at him on the road trip. He played in four of the seven games and averaged 11.3 (54.5%) points per game and 11.8 rebounds per game during them. From the line he was 9-19 (47.4%).

More important than the numbers, his disengagement on both ends of the floor is damning. In the four games that he played on the road trip the Lakers were 1-3. With every passive game Dwight Howard sleep walks through he misses out on another opportunity to lead the team and pause the ever dissonant noise surrounding his play, if only temporary.

With Pau Gasol out, Antawn Jamison becomes an important piece

'Tawn has been in and out of lineups under Mike D'Antoni, but with Pau Gasol now out, he will be taking on a nearly defaulted 20+ minutes per game.

Offensively, Jamison is passable so long as he isn't settling for jacking up threes, and is actively cutting. Looking over his numbers, Antawn is currently ranked seventh in the league as a cutter at 1.44 points per possession. On 40 possessions he's converted on 28 of them, giving him a 70% success rate to score when utilized properly.

There are a myriad amount of things to pick apart in regards to the Lakers offense, but one of the most consistent issues is the lack of player movement away from the ball. Antawn is an active body in the offense. Let's take a quick look at the importance of Jamison cutting in the offense.

With four players out, one player in (Pau), the Lakers have the Timberwolves' defense spread thin. Steve Blake has his man pulled out to the perimeter, so on the opposite block of Pau there's prime real estate that Jamison is going to recognize and cut towards. 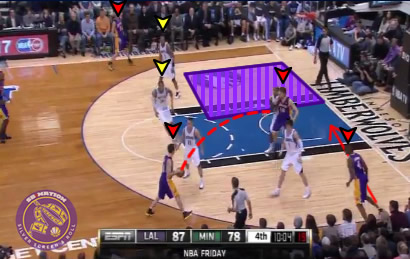 This is one of the areas where Pau will be missed most-- as a playmaker in the post. He recognizes Jamison is cutting and is ready to hit Jamison with the pass. Jamison's man moves with him, but is distracted by Pau having the ball in the post. 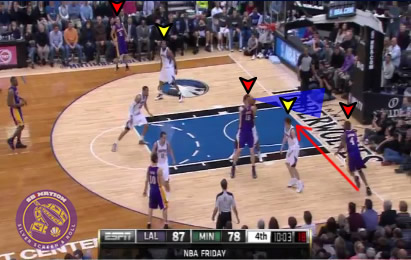 Pau hits 'Tawn with a precise lead pass. There's a ton of ground for the only defender that can make a play on this to cover at this point. 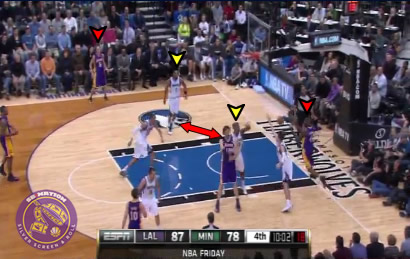 And the unlikely, but pretty, Jamison smash here. Should the defender had challenged Antawn, Steve Blake is alone on the perimeter as well since his man had to rotate in an attempt to save the play. 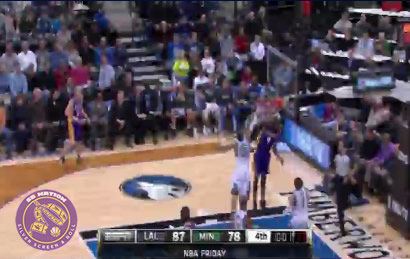 The other are that Jamison has been effective is as a roll-man. In fact, he's been so effective that he's ranked 4th in the league as a roll man. 1.31 PPP on 60% shooting as a roll man makes Jamison a great option in the pick and roll.

The problem with playing Antawn Jamison 20+ minutes per game is that as atrocious as Metta can be offensively, Jamison is equally terrible defensively. Antawn Jamison is ranked 324th on defense, allowing .95 PPP overall. When isolated his man, on average, will tally up 1.32 points (17-28) per possession. This has always been the give and take with Antawn, but with the Lakers depth shrinking, it becomes a necessary evil and occasional blessing.

Kobe really is going to have to do it all, offensively

As mentioned earlier, Pau Gasol's absence puts even more pressure on the remainder of the Lakers, Kobe included. Without Pau, the Lakers lose one of their few "playmaking" threats, especially in regards to the passing game. Before the road trip kicked off the "Pass" Mamba was in full effect, riding his 39 assists over three games stint.

Through the road trip Kobe averaged 6.1 assists. In four of the seven games he had eight or more dimes, but in Boston he had zero.

During the road trip Kobe scored 21.1 points per game to go along with the assist numbers. In that time frame he made only ONE three point attempt, while putting up FIFTEEN attempts. Going 1-15 netted him a sexy 6% from long-range. It's also worth noting that, on the season, Kobe has averaged 5.3 three point attempts per game, so he cut down his attempts in half. It'd only be speculation to cite the tendinitis in his elbow as reason for his decrease in three point attempts, or put it on his decision to "make the right play" as he has said multiple times post-game in the last few weeks, but what is definite is his concerted effort to cut down on the long-ball.

However, the Lakers have had trouble scoring as a whole on this road trip, and will need Kobe to find a way to walk the fine line of scoring efficiently while feeding his teammates who struggle at creating their own shots. Averaging 21.1 points per game, 17.1 field goals per game, and 6.1 assists is a good balance, but even still only pushed the Lakers to a 4-3 record in the trip. Obviously this doesn't all fall on Kobe, but it's something to keep an eye on.

After becoming a starter just a few short weeks ago it was time for the evaluation of Earl Clark to be in full effect. This seven game road trip was a great opportunity for Clark to prove himself, and prove himself he did. In four of the seven games he logged a double double.

He averaged 12.7 points per game on 47.4% (36-76) shooting. Offensively, he's still exploring his game and at times falls into the trap of trying to do too much. Like the rest of the Lakers on this road trip, Earl also struggled from deep going 5-20. Clark is averaging 42.1% on the season from long range, but he put up a paltry 25% while Staples Center prepared for, and hosted, the Grammys. Overall, Clark is shooting 48.5% from the field, and is far more accurate when he receives the ball when his feet are set. With the amount of attention Dwight pulls in the post, as well as Kobe, it's important to have a release valve. Clark has proven important in that aspect for the Lakers.

Here, Dwight slips a pick and roll screen with Steve Blake and heads to the post where Ray Allen is awaiting. LeBron has already divided his attention from his man, Clark. 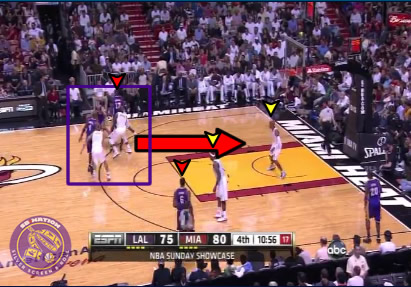 Once Dwight receives the ball three players from the Heat are awaiting to converge on the big man. This leaves both Jodie Meeks and Earl Clark open on the perimeter. 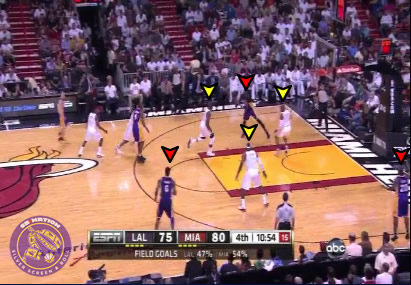 Here, four members of the Heat are crowding Dwight. Two in the post, and two patrolling the paint. LeBron has good position to interrupt the passing lane from Meeks, but this leaves Clark in great position. Dwight makes the easy pass. 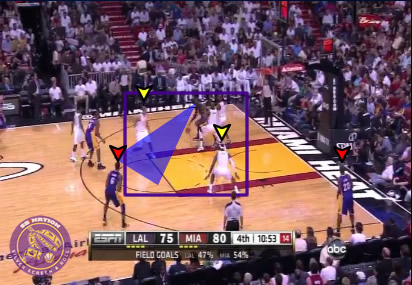 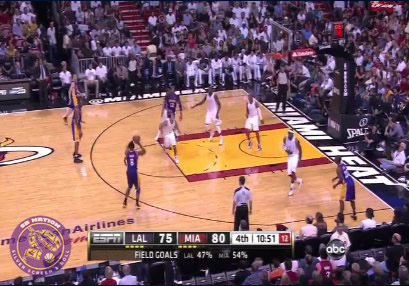 And: Earl Clark's shot chart on the season for good measure. 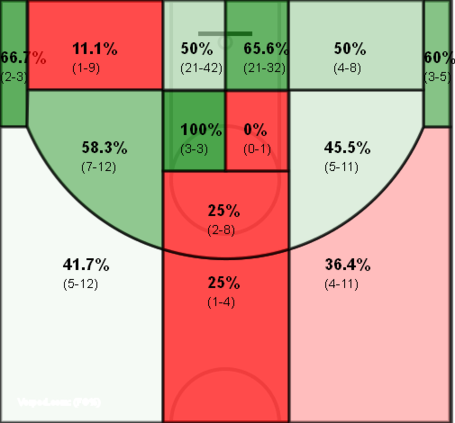 Clark also averaged 9.4 rebounds per game on the road trip, giving him a near double double average. Everything that applied to Earl Clark when he first made noise given an opportunity to play still applies. He also has shown his defensive versatility as he can defend shooting guards, small forwards, and power forwards (see: Garnett, Kevin). While he isn't always able to "shut" his man down, he does a good job based on his athleticism, length, and foot speed.

File this under "no kidding", but the loss to the Phoenix Suns to open the road trip continues to sting. While 4-3 isn't a terrible mark given the turmoil with Pau and Dwight being hurt through the trip, 5-2 would have been much sweeter. The Lakers still have to make up 3.5 games to make the playoffs; a number that they've been staring at for quite some time.

Making the playoffs is going to be an incredibly tight squeeze, but still a possibility no doubt. The Lakers need some help to get in, and while Houston, Portland, and Utah haven't made ground on the Lakers, the same can be said the other way around. At some point the Lakers will need to climb a few rungs on the ladder, which was a possibility going into this road trip.

Instead, they did what they've done all season: hung on just enough as to not fall to the ground, making no real progress. Now, they'll face the second half of the season without Pau, and a wheelbarrow filled with games that could have been. If they miss the playoffs, the loss in Phoenix will be one of the many games the Lakers will have to shake their head in disappointment at.