Lakers take Pau Gasol off trade block, according to report

Are the Lakers backing off of the idea of trading Pau Gasol?

Share All sharing options for: Lakers take Pau Gasol off trade block, according to report

The Los Angeles Lakers had discussions with "several" teams about trading Pau Gasol, but the team is encouraged with his recent performance and have taken the big man off the trade block. Gasol is averaging 17 points on 60 percent shooting, along with 7.6 rebounds per game over the past five games and is safe, "at least for now," according to ESPN's Ramona Shelburne.

The Los Angeles Lakers have decided -- at least for now - that they're better off keeping four-time All-Star center Pau Gasol, according to sources close to the situation.

Sources told ESPN.com that the Lakers, after weighing the idea of making Gasol available before the NBA's annual trade deadline in February, are encouraged by the way Gasol has played over the last three games as well as his efforts to make amends for his recent public spat with coach Mike D'Antoni.

The Houston Rockets are one of the teams Los Angeles opened discussions with, according to Shelburne's report, though the Lakers did not get into more than exploratory talks:

Sources told ESPN.com this week that the Lakers, before Gasol's resurgent play, did engage in exploratory talks with several teams but never got too far with any of the calls.

The Lakers did have talks with the Houston Rockets, sources say, but those conversations never got serious, even with Houston determined to trade disgruntled center Omer Asik before a self-imposed deadline of Thursday.

Gasol has struggled through the season, averaging career-lows in shooting percentage and points per game. His recent quip to the media about being misused in the Lakers' offense sparked a rumor that the team would consider trading Gasol unless he improved both on and off the court.

To Gasol's credit he is without question playing better basketball right now. He's doing a good job rolling to the rim once he sets a screen, and it's gotten him quality looks at the rim:

Yes, that's Wesley Johnson feeding Gasol out of the pick-and-roll. Here's a look at how that "resurgence" from Pau translates onto the shot chart: 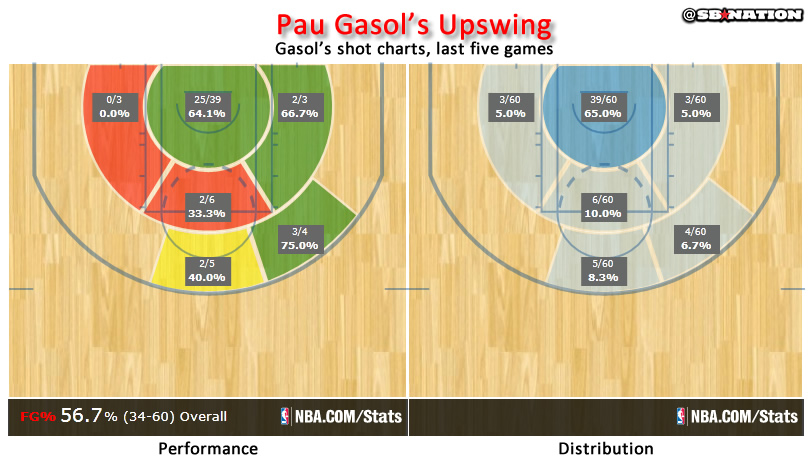 The Lakers are off until Friday when they face the Minnesota Timberwolves before going on a two-game West coast road trip leading up to their Christmas Day game against the Miami Heat, and it seems Gasol's going along for the ride.