The Lakers are still seeking their first victory since Kobe Bryant's return after a long night in Oklahoma City.

The Los Angeles Lakers' defense couldn't hold off the Oklahoma City Thunder in a 122-97 defeat. The Lakers held a six point lead early in the first quarter but the Thunder quickly took control of the game and led from the 6:42 mark on. Kevin Durant scored a game-high 31 points on 10-of-13 shooting. Oklahoma City led by as many as 30 points.

Kobe Bryant played the role of starting point guard well, dishing out 13 assists. He didn't look to score, putting up just six field goal attempts for four points. He also turned the ball over seven times, averaging six turnovers over his first three games back. Kobe played 23 total minutes, sitting out the entire fourth quarter once the Thunder had a 20 point lead. 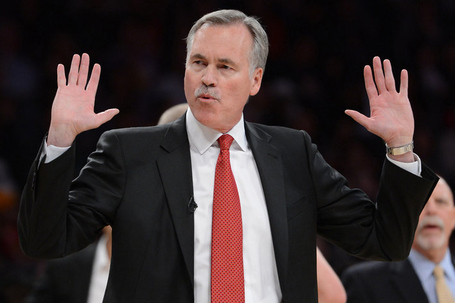 The Lakers three-point shooting took a night off. The team made just seven of their 26 shot attempts from beyond the arc, missing multiple wide-open shots from the perimeter. Wesley Johnson was one-for-six from long distance. Jodie Meeks also struggled from deep, making two of his seven attempts.

Meeks struggles were across the board. He shot just 20 percent from the field, missing wide open shots and layups around the rim. Chris Kaman played for the first time in nine games, coming off the bench in the fourth. Robert Sacre continues to pick up primary backup center minutes, moving well on defense and even hitting a baseline jumper.

Russell Westbrook finished with 19 points, 11 assists and eight rebounds. The Thunder outrebounded the Lakers 59-41 while shooting 47.5 percent from the field. Nick Yong scored a team-high 17 points off the bench. Pau Gasol went 6-of-10 for 14 points and seven rebounds.

The Lakers lost the first game of their four-game road trip and play again Saturday night in Charlotte. Bad news, Lakers got blown out by the Thunder. I suppose the good news is the starters played limited minutes leading tomorrow. The Lakers lose their third straight game in a row, the Thunder picked up their fifth straight victory.