A Night at the Palace

There is nothing better than spending a night watching a Lakers game live, even if it is in the Palace at Auburn Hills.

Share All sharing options for: A Night at the Palace

I had the pleasure of taking my family to the Palace of Auburn Hills again this year for the Lakers-Pistons game. Relocating from Southern California, where I was born and raised, to the mid-Michigan area has left me with only one Lakers game a year that I can attend without spending significant time behind the wheel. Needless to say, I make it a priority to be in attendance, not only for the entertainment value, but so that I can be sure to share wonderful Lakers memories with my children so that they too may someday become fans. Last year I put together a running-diary of the game. This year I will simply give you my 10 random thoughts (not all related to what occurred on the court).

1) First 4 minutes of the game

I really wish I could give you my thoughts but I have no idea what happened. Right after the final note of the national anthem my son (4 years old) said he needed to use the restroom. It didn’t matter that not five minutes earlier I asked him if he needed to go and he of course said no. My wife offered to take him, but I declined her assistance. I figured the odds are good that he will need to go again at an inopportune time and I would rather she take him then. The decision paid off because my wife ended up taking him with about three minutes to go in the 4th quarter.

There is something to be said about knowing your role and executing it. Throughout the game these two were active defensively and planted themselves behind the three-point line, typically in the corners for Williams and on the wing for Johnson. Their offensive role is simply to space the floor as three point shooters and they were superb Friday night. Defensively they were quite good at sagging into the paint when the ball was on the weak side and then quickly rotating to the perimeter when the ball was moved to the opposite side. The line-up featuring both guys appears to be particularly strong against small ball line-ups. These two are able to switch picks and guard numerous perimeter positions while providing floor spacing at both forward spots.

The Lakers were both excellent and awful at defensive rotations Friday night. Anytime the ball moved either around the perimeter or inside-out, the Lakers did a tremendous job of getting out and contesting shots. The Pistons made only one of eight attempts from behind the arc as the Lakers closed out on shooters, contesting shots if not completely preventing them all together. This was the excellent part of their defense Friday night.

Unfortunately their rotations towards the key were poor. The Lakers never seemed to be on the same page with regard to who on the weak side was to pick up the Detroit players who cut through the key. The Pistons spent all night scoring right at the rim and while much of that was due to fast break points and offensive rebounds resulting in put backs, there were plenty of plays where a Detroit player flashed to the middle of the key or cut to the rim and neither of the two help defenders stepped up to deny the pass. Once the ball was in the middle of the paint, it was difficult to prevent the basket, especially with the leagues’ best offensive rebounding front line aggressively looking to put back any errant shots.

Jordan Farmar hit another three at the end of the first quarter as the clock was expiring. When Farmar was dribbling the ball at the top of the key, letting the clock wind down, I almost knew he would settle for a pull-up three, and yet I was comfortable with it. Everything about successful basketball says that such a play is a bad basketball decision. Perhaps it was the 17 previous three point attempts he has made in the final 5 seconds of a quarter that eased my mind.

Detroit must have some sort of a fascination with calling big musicians or groups from the '90s to perform at halftime. Last year it was Grammy award winning rapper Coolio. This year it was Grammy award winning female R&B group, TLC. Even though the group has lost the "L" in TLC with the passing of Lisa "Left-eye" Lopes in 2002, the two remaining singers are continuing to perform. Their set featured them singing one verse and the hook for each of their major singles. Overall their performance was surprisingly enjoyable, a significantly better result than the disaster that was Coolio last year when he didn’t even perform his biggest hit.

Speaking of disasters, the Piston’s cheerleading team had a horrible mishap that unfortunately resulted in a fairly gruesome injury. During the gap between the 3rd and 4th quarter the Pistons brought out their cheerleading team to perform a routine. The Pistons have both a dance team (much like the Lakers Girls) and a more traditional cheerleading team that focuses on stunts. Unfortunately one of the guys in the group was doing a series of back handsprings when he apparently did one too many rotations and kicked one of the girls in the face. It was the sole of his shoe hitting her square in the face and knocking her down. She quickly got up and took off towards the tunnel trying to cover her face. She ran right past me (we were seated right next to the tunnel). She was bleeding profusely - it looked like that famous scene from the movie Carrie - and I covered my son’s eyes as I didn’t want him seeing her as she approached. We all hope she is OK.

Much has been made about Nick Young’s game winning charge, but that wasn’t the only defense he played all night. There were a few different possessions where the communication between he and Robert Sacre was superb. Sacre would call out the screens and position of help defense and Young was certainly listening and engaged. I noticed multiple times that he switched his stance on defense to shade towards his help after hearing his big man provide the command. Eventually the ball was moved to the other side of the court, but the level of effort and focus that Young demonstrated was far more than I expected.

As the Lakers made their comeback in the 4th quarter, it was pretty clear the Southern California swagger was present. The tandem of Farmar (UCLA) and Young (USC) used their quickness and ball handling skills to create multiple opportunities via a dribble penetration. Young took advantage of the much slower Kyle Singler to get into the paint. After a few possessions he found himself being defended by Josh Smith and was still able to beat him off the dribble. Similarly, Farmar found ways of getting to the rim, including a beautiful weaving drive capped off with a soft reverse off the glass. Both Farmar and Young have plenty of confidence in their abilities and are definitely capable of creating their own shots or generating opportunities for others no matter who is guarding them. This is a luxury the Lakers didn’t have last year as few players outside of Kobe could create opportunities offensively.

It is one thing to photo-bomb an interview in the background; it is another thing to jump in the middle of the interview. After the game, Young proceeded to not only jump in one interview, but three. After the win Farmar, Johnson, and Gasol were all conducting interviews with various media members on the court. Young finished up his interview first and rather than heading into the locker room he proceeded to move from one of his teammates interviews to the other, jumping in the middle and celebrating the victory. From Farmar, to Johnson, to Gasol…he interrupted all three, and all of his teammates simply laughed and smiled. It was Nick being Nick and they generally seemed to enjoy it. If that wasn’t enough, he then ran towards the section of Lakers fan right near the tunnel and celebrated for a few seconds, giving out hugs and high-fives before retreating back to the locker room for good.

Chris Kaman received a coach's decision DNP for the game as D’Antoni elected to go with Sacre off the bench. It may have been the right decision given Sacre’s athleticism is a better match for Detroit’s frontline of Drummond and Monroe, but it was nonetheless disappointing. The aforementioned section of Lakers fans that Nick Young jumped into had a large group of fans there specifically to see Kaman. Kaman was born and raised in Michigan and played his college ball for Central Michigan University about two hours north west of the Palace. There was a large group of fans that stuck around after the game and Chris was kind enough to come out and spend 20 minutes taking pictures and signing autographs. He was clearly disappointed in not playing but he remained kind and treated his fans very well. He was even signing souvenirs for young Pistons fans. He seems like a great guy who had no intentions of leaving until he met with every fan that stuck around after the game.

Overall it was a great night. The game was exciting and ended with a Lakers victory. Most importantly, my family made a new set of memories. My son was especially excited because he got to "meet a giant". My only regret is that I have to wait another year for the Lakers to come back. 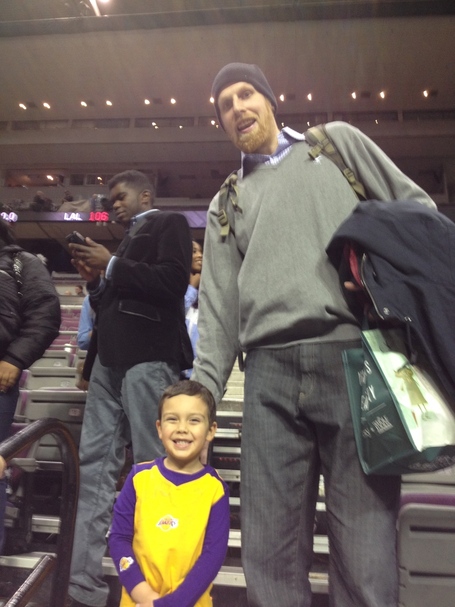