The next tweak to the Lakers starting five will remove Shawne Williams from the starting lineup.

The Los Angeles Lakers visit the Houston Rockets Thursday and will face the daunting task of dealing with a frontcourt featuring Omer Asik and Dwight Howard sharing minutes together. Mike D'Antoni is still tweaking his lineups and rotations and is considering playing a "big" starting lineup, reports Dave McMenamin of ESPN.

Shawne Williams was named the starting power forward to open the season under the notion he could space the floor for Pau Gasol and the Lakers' offense. He has made three of his 10 three-point field goal attempts, averaging 3.2 points and three rebounds per game.

Hill started the second half of the Lakers' blowout loss to the Dallas Mavericks Tuesday but McMenamin also notes D'Antoni has not decided on whether Hill or Chris Kaman will start at power forward next to Gasol. It's also worth mentioning Hill is currently dealing with a right knee bone bruise which could be a factor in D'Antoni's decision.

This will be the second tweak to the starting five since D'Antoni announced the lineup hours before the Lakers' season opener. His first adjustment swapped the roles of Xavier Henry and Nick Young,

Hill and Kaman provide unique assets to the team. On one hand Kaman has started off the season shooting an incredible 61 percent from the field. Look at all the green: 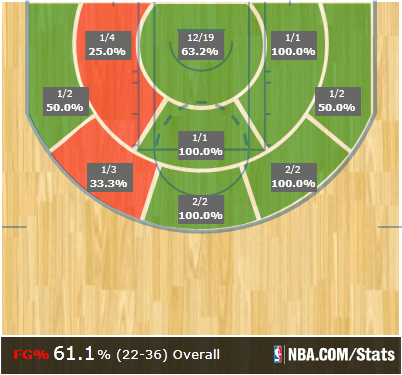 On the other hand, Hill has been a rebounding machine, collecting 25.9 percent of all available offensive rebounds while he's on the court, according to the NBA's media-only stats website. Either way, one of these players will start at power forward Thursday, and it's also worth watching how and if Williams fits into D'Antoni's rotations off the bench.