Observations on the first week of the Lakers' season.

The first week of Los Angeles Lakers basketball has come and gone and the team split their first four games. The week began with a win over the Los Angeles Clippers and ended with a down to the wire victory against the Atlanta Hawks.

The season is young and the sample sizes are too small to draw overarching conclusions, but it's fair to take the early results for what their worth and break down what's starting to take form.

Xavier Henry is starting, Nick Young is on the bench, Jordan Hill is a beast on the offensive glass, Wesley Johnson is still a huge question mark and the NBA's new SportVu player tracking provides statistical data behind an observation made earlier this week about Pau Gasol in the Lakers' offense.

Here are a handful of Week 1 observations:

Xavier Henry is doing all kinds of things

If you would have told me Xavier Henry would be the best part of opening week of the Lakers' season I would have told you that Steve Nash is looking mighty spry out there.

A week has passed, Henry has become the starting small forward, and he's doing all sorts of positive for the team.

Let's work outside in on what Henry has shown in the first four games. First and foremost in any Mike D'Antoni system the three-point shot is the holy grail. If his systems were solar powered shots from beyond the arc would be the sun.

Henry is shooting 45 percent from deep on 2.8 attempts per game, fitting into the kind of role that gets you minutes under D'Antoni. Here's a look at his shot chart, which has a bit of blood around the rim, but we're getting to that part: 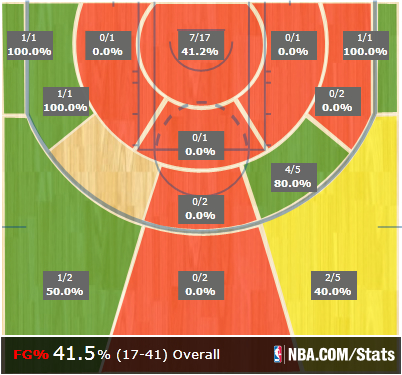 The mid-range isn't there, his above the break threes are average and he isn't finishing at a high-rate at the rim. He's attacking the paint, though, and Henry's shot distribution chart is what's most impressive about his first four games as a Laker: 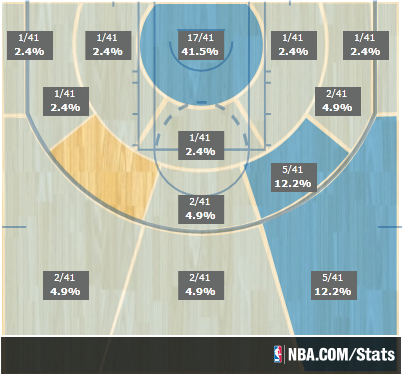 It looked like Henry was attacking the rim -- sometimes with reckless abandon turning into turnovers and/or charges -- but this confirms it. 41.5 percent of his shot attempts are around the rim. It isn't turning into direct points often enough, but he's also drawing shooting fouls like a mad man.

Henry is a player who has seen minimal minutes after being one of the nation's top high school talents. If there's a room for growth, the team is giving him a chance to stretch his legs and take his best shot at finding his way to becoming an NBA player. Consistent minutes and an etched out role could go a long way in helping some of these percentages rise.

Raise your hand if you're surprised Jordan Hill leads the team in offensive rebounds per game (3.3) despite playing just 14 minutes per game. None? Okay then.

Hill has been as aggressive as ever around the rim in the limited minutes he's receiving. Hill is an elite offensive rebounder. He led the league in offensive rebound percentage per 48 (minimum 300 minutes) last season, grabbing 18.1 percent of available misses, according to the NBA's media-only stats website.

How's he doing so far? Oh, just putting together an insane 29.5% offensive rebound percentage. Four games, yada yada, but Hill is incredible at cleaning the glass. He spoke with ESPN's Dave McMenamin earlier in the week about how he's able to be so effective in that area:

"When a shot goes off, I can know if it's going long or know if it's going short, so I just try to bully my man to that position before he gets to it," Hill said. "I may not look too strong, but I'm very strong when we're down there, so I can definitely get there."

Sunday's victory over the Atlanta Hawks was much harder than it needed to be. The Lakers were in control until the fourth quarter. The Hawks tied the score going into the final 20 seconds of the game and the Lakers went to Pau Gasol in the low-post to put the game away. Pau missed the shot, but who was there to grab the offensive rebound and give the Lakers another possession? Take a guess:

The Hawks had two defenders trying to box Hill out, but he stuck with the play, crossed to the other side of the rim and plucked the rebound away from a third defender (Al Horford). Pau went on to sink the game-winning free throws off the extra possession. Game, Lakers.

D'Antoni on the crunch time lineup: "Jordan gives us that extra rebounding so that might be the way we go"

Can Swaggy get his groove back?

Xavier Henry rightfully earned starting small forward duties as much as Nick Young deserved his minutes to be revoked.

Young made 11 of his 31 field goals to start the season. Eight of those field goals came off of assists, meaning Young has created three of his own field goals, according to NBA's media-only stats website. His shot distribution chart looks something like the anti-Xavier Henry: 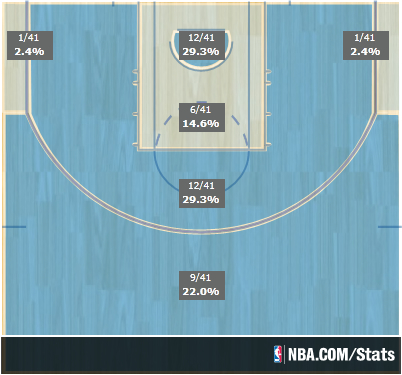 D'Antoni's benching of Young is worth keeping an eye on. In his first game as the Lakers' "sixth man" Young had his best game in a purple and gold uniform, putting up 13 points on five-of-nine shooting. He also had four rebounds and four assists. Henry and Young both did well in their new roles, so hats off to D'Antoni's first adjustment to the lineup.

For all of the things that are starting to take form for the Lakers Wesley Johnson remains a huge question mark. Is he a small forward? Can he actually play power forward? It's hard to tell so far, but this feels similar to the Xavier Henry riddle of needing more minutes to settle in and grow.

What is clear is D'Antoni is going to do his best to find something - anything - with Wesley. He's averaging 23.5 minutes per game -- the most of any non-starter. He's played minutes at both forward positions and it's obvious he's learning on the job.

Still, he's shown promise on defense using his athleticism and length to put together highlights like this:

We're a long LONG ways away from calling him the Lakers "stopper" on defense, but it's worth keeping an eye on. Los Angeles desperately needs a player to deal with the endless amount of scoring wings in the NBA and he has the length to fill that role. If he can continue developing as a weak side help defender while holding his own in the post he could be a tremendous asset to the team.

Pau Gasol at the elbow, dawg

There's a new set of data available to the public this season and it's called SportVu. The data is collected by six cameras that have been installed in all 29 arenas that track everything happening on the basketball court. The NBA has released an assortment - but not all - of the data being collected, and one of the categories is "Touches/Possessions."

The category is defined as such, per the official NBA player tracking database:

The number of times a player touches and possesses the ball, where those touches occur on the court, how long the player possessed the ball and the number of points, assists and turnovers that occur with the ball in his possession.

Earlier in the week I discussed the amount of touches Pau Gasol was receiving at the elbow and from 15 or more ft. out. Or, in this area:

The available player tracking data has confirmed the theory, ranking Pau Gasol fourth-highest in elbow touches per game at 10.3.

Elbow touches are any "touches" that originate from the five foot radius outside of the lane and inside the three-point line. Marc Gasol, Anderson Varejao and LaMarcus Aldridge average the most elbow touches per game.

That's the power of live-game observations, film room dissection and statistical proof working together. The data becoming available is powerful, but is still too incomplete to base sweeping theories around. Provided within context, though, and it's clear they can be another shovel in the growing shed of analytical tools available.