The Lakers picked up a win that didn't seem likely. Who knew Wesley Johnson and the bench could step up like this on the road?

The Los Angeles Lakers vaulted over the .500 mark with a 106-102 victory over the Detroit Pistons. The Pistons did a whole-lot right to win this game, the Lakers didn't, but the result fell in the Lakers' favor. Something that feels like a rarity. With a two-game winning streak behind their backs and a successful 2-1 road trip, the Lakers are looking much better than anticipated and the return of Kobe Bryant has yet to come.

How did this group of Lakers pull of this victory?

Wesley Johnson have it all. He was draining threes, blocking shots and even put on a little Kobe impression with an isolation mid-range shot around the elbow. He put together one of the best games of his career and his best game as a Laker by dropping 27 points on the Pistons. His career-high is 29 points, set on March 18, 2011, and he was just two points off from matching it. He didn't score any points in the fourth quarter, but his contributions through the first three quarters was phenomenal. Just look at it: 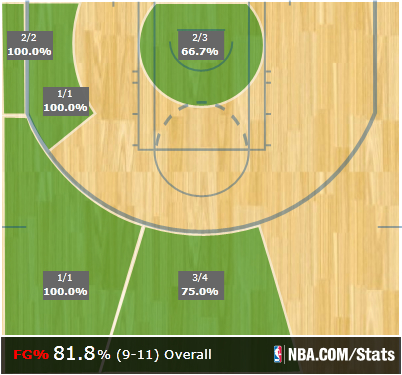 Seriously, this is kinda' double-dipping on Wesley Johnson, but this is total beast section stuff. Mike D'Antoni has beaten the buzzer going into halftime, in Detroit, using an inbounds lay for a lob dunk twice in as many seasons:

The bench scored 54 of the Lakers' 106 points -- just a smidge over half. This was huge, considering all Lakers starters not named Wesley Johnson combined for 27 points and Jordan hill missed one-fourth of the game with an ankle sprain.

Put under another light: The bench scored 28 of the Lakers' 29 fourth-quarter points. That's huge.

Shawne Williams was a beast from beyond the arc, draining six three-point shots. He finished the night with 20 points a nine rebounds, playing extended minutes in the absence of Hill. By far his best game as a Lakers.

Jordan Farmar scored 13 points, seven in the fourth, and played big in one of Steve Blake's worst games of the season. Watching him navigate through traffic out of the pick-and-roll for a reverse layup was beautiful:

Nick Young only scored 12 points on an inefficient 3-of-12 shooting, but he made big plays down the stretch to seal the win for the Lakers. He made four points over the final 1:05 of the fourth quarter, but it was the charge he drew with the game on the line on Josh Smith that will stand as the lasting image of how he impacted the game:

Wesley Johnson and the bench sent them home with a victory. Interesting season, no doubt.

This is one-part Jordan Hill injury and every-other-part welp. Even when Hill was on the floor he wasn't eating the glass, and he didn't leave until the third quarter (and finished with only four rebounds). The Pistons dominated the glass, outrebounding the Lakers 55-44 overall. Teams typically don't survive allowing 22 offensive rebounds for 25 second chance points, but somehow the Lakers managed. Really bad showing on the glass allowing Josh Smith, Andre Drummon and Greg Monroe to combine for 38 rebounds.

Going over the "Burdens" sections really shows how miraculous it is the Lakers won this game. They gave up 17 turnovers to the Pistons' 13. Detroit scored 20 points off of said turnovers. The main culprit was Steve Blake, who gave up five turnovers (four in the first quarter alone). All of his turnovers were off of the type of passes he's been making lately. I won't hammer Blake too hard, he also had 10 assists, and the Lakers didn't take care of the ball as a team. Partner sloppy turnovers with aforementioned bad transition defense and things can get ugly quick for the Lakers.

And they did. Except the bench managed to close out the game to save the day.