The Lakers have flipped the script and won games with their defense rather than their offense.

The Lakers have kick-started this season with a 7-7 record despite the absence of Kobe Bryant. Being .500 after 14 games is unexpected. Doing it against the most difficult schedule in the league (according to Basketball-Reference) is very surprising. Achieving these results because of the defense is jaw-dropping.

Defensively the Lakers are giving up 101.9 points per game, good for 24th in the league. The general consensus entering the season was that this Lakers team, which ranked 20th last year in defensive efficiency and lost its two best defensive players, would threaten the record books for the most inept defense to ever step on the court. In light of those expectations and the fact that LA is giving up over 100 points per game, no one seems to be focusing on just how good they have been defensively. It may surprise some but this Lakers defense has actually been on the verge of elite status.

The defense has somewhat succumbed to the same pitfall that prior Mike D'Antoni teams have been falsely judged by in the past: pace. These Lakers, infused with an abundance of youth and athleticism in the offseason, have found a new gear under D'Antoni. While it may not quite match up with the seven-seconds-or-less Suns of the past, this Lakers team is pushing the tempo often. The Lakers currently play at the 4th fastest pace in the league. Playing games with such speed generates more possessions and thus inflates the number of points a team gives up per game. This is why the evaluation of team defense has moved away from points per game and on to advanced metrics like points per possession. When adjusting for pace, the Lakers give up 103.9 points per possession; a result which lands them with a ranking of 11th. This is a significant improvement over the ranking of 24th based on points per game, but even this metric is understating just how good LA has been.

There are two factors that impact a team's defensive rating: the team's ability to get stops and their opposition's ability to score points. Over an 82-game season, teams play roughly equal schedules of opponents and so the defensive rating really does well at measuring a team's defensive ability. However, over a shorter time frame, this statistic can be skewed based on the quality of the opposition's offense. If a team has played only a few games and the opponents all possess potent offenses, it shouldn't come as a surprise that their defensive rating will suffer. This is important because the Lakers have played a schedule exactly like this. 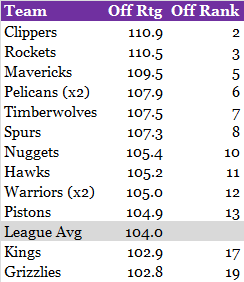 The table to the right shows the Lakers opponents so far this season along with their offensive ratings and rankings. The Lakers have faced a gauntlet of good offenses night in and night out. Only two of the fourteen games came against teams with below average offenses and the Lakers held those two teams to 86 and 89 points respectively. When considered in total, no team in the league has faced a schedule of comparable difficulty on this end of the floor.

In order to truly judge the defense, we need to adjust the defensive rating for the quality of the opposition. For each team in the league, I determined the opponents’ average offensive rating. Given that teams have played different splits of home and road games, and the location of the game does have an impact, I made an adjustment for location. Vegas as well as most statistical analyses on home court advantage estimate it at 3.5 points. Assuming this advantage is split evenly between offense and defense, and adjustment of 1.75 points is made for each game depending on location. After going through this exercise, the Lakers opponents (adjusted for game location) have been 2.1 points per 100 possessions better than the league average. This means that when we adjust for difficulty of the schedule, the Lakers defensive rating improves from 103.9 to 101.8.

Where does that land LA? The league average defensive rating is 104 while the 5th best defense is 100.8. Essentially the Lakers are closer to a top 5 defense than they are league average. This is a huge accomplishment and no one seems to be talking about it. Rather than regressing after the loss of Dwight Howard, the team has performed better than last year on the defensive end. This year's Lakers are holding the opponents to a lower effective field percentage, forcing more turnovers, and grabbing a higher percentage of defensive rebounds. Those are three of Dean Oliver's "Four Factors" and they are the reason the Lakers sport a .500 record despite the offensive being rather inept.

With Kobe Bryant's return on the immediate horizon, perhaps he can lift the Lakers offense back to a top 10 status. The Lakers were a top 10 offense last season when Bryant was on the floor and a bottom 10 offense when he sat (much like this season). The combination of a top 10 offense and top 10 defense would certainly guarantee the team a spot in the post season. Of course this also requires Kobe to focus on defense so as to not let the results slip on that end. Last year the Lakers were remarkably worse defensively when he was on the floor. Here's to hoping he recognizes the 48 million new reasons he has for playing hard on both ends of the floor.