The Lakers' offense was sharp, led by Pau Gasol and a big showing from Xavier Henry.

The Los Angeles Lakers reached the .500 mark with a 100-86 victory over the Sacramento Kings and are on their first three-game winning streak of the season. When things go right for the Lakers they're a pretty fun team to watch. The ball moves, players get up and down the court, Pau Gasol creates magic in the low-post, Jodie Meeks finishes at the rim, the "ball finds energy" and the pick-and-roll breaks down the opponent.

The Lakers leaned on Pau Gasol and he delivered for the second straight game. He finished with 20 points and 10 rebounds and the Lakers made it a point to run the offense through him through much of the first half. Whether it was Cousins or Jason Thompson Pau was doing "Vintage Pau" things to the Kings.

Xavier Henry had a big game off the bench, notching a game-high 21 points as he finished at the rim, converted five of his six attempts at the charity stripe and drained two of his four shots from beyond the arc. Jordan Hill was excellent setting screens and diving to the rim, continuing to refine that area of his game. Hill notched another double-double with 10 points and 13 rebounds.

Steve Blake continued his excellence in the assist department, hitting the team with bounce passes left and right and doing a phenomenal job of driving baseline and kicking out to the open man. Blake dished 12 dimes on the night.

After holding the Kings to just 13 points in the third quarter the Lakers' offense took over to close out the game. Everything was going in and you could see the salt being poured on the Kings' wounds. There was a "DeMarcus being DeMarcus" moment that led to a double-technical foul. Tough trip to Los Angeles for Cousins with back-to-back losses.

The Lakers executed a phenomenal game plan on offense that exposed the Kings as one of the worst defensive teams in the league. The offense looked cohesive and purposeful, something that couldn't be said much of last season. A victory worth enjoying from wire-to-wire before they head out on a three-game road trip that begins in Washington on Tuesday.

An extra, late shout out to Meeks. He finished with 14 points. Look where the shots are falling: 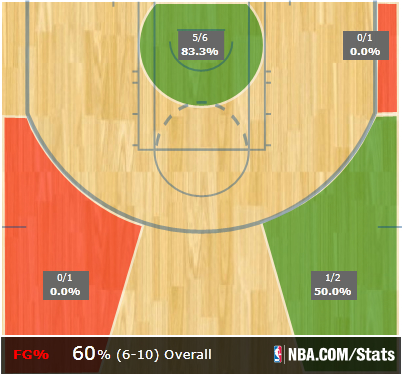