Kobe Bryant's return to the Lakers is filled with complexity

With more questions than answers for the Lakers franchise, the return of Kobe Bryant is a layered cake of complexity.

Share All sharing options for: Kobe Bryant's return to the Lakers is filled with complexity

Kobe Bryant is going to play for the Lakers again pretty soon. We don't know when, we don't know how he will look as he gets back into game shape, but we know the return is imminent. We always knew that, though, but we're officially closing in on a return date. He's practicing with the team for the first time since his Achilles popped and the Lakers are 5-7 without him.

Things are about to get complicated in Los Angeles.

There are many angles to consider with the return of Kobe Bryant. Even if he's 25 percent less effective and plays limited minutes early on it's a given he will give the team a boost. Forget the nuances of defense and offense for a moment and consider that the Lakers are relying on Nick Young, Xavier Henry, Wesley Johnson and Jodie Meeks to handle small forward and shooting guard duties. They've done well. As Kanye would say, #NODISRESPECT, but they aren't Kobe.

The Lakers' offense, for as reasonably "good" it was projected to be, is still near the bottom of the league in efficiency. 100.6 points per 100 possessions (per Basketball-Reference) isn't what most had envisioned for this squad -- that's 25th out of 30. You'd have to go back to the 1975-1976 Lakers to find a worse offensive rating in franchise history. This team is performing historically bad on offense.

Kobe immediately boosts that even if he's sitting in a chair at the elbow putting up shots while blindfolded. 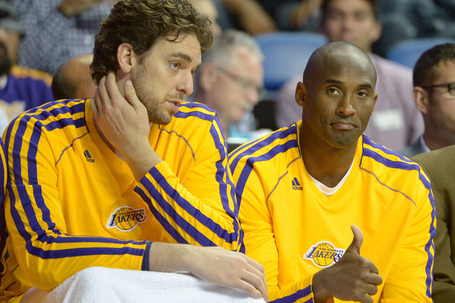 The Lakers have lifted all restrictions on Kobe Bryant's basketball activities.

If the season ended today (you know, 12 games into the year) the Lakers would be on the outside of the playoffs looking in. That's not a big deal, really, because it's still stupid early in the season. They're 1.5 games out of the eighth seed, belonging to the Dallas Mavericks and their 6-4 record with Monta Ellis.

Let's not think about the standings right now, though. Those really don't matter all that much this early in the season. The Lakers are playing hard and exceeding expectations together and the wins have been a blast to watch. The year has already been more uplifting than the entire Dwight Howard campaign, and that's with Steve Nash being reduced to broken status a few games in. But the overarching reality still matters, and this Lakers team isn't going to win a title. The rebuild is still coming. The 2014 NBA Draft is still going to be incredibly important to the team.

They clearly aren't tanking, but they aren't contenders. Enter Kobe.

Who knows how the team performs once they have one of the greatest players in NBA history to fill up the usage rate. Chris Kaman currently leads the team in usage rate at 25.2 percent. The Lakers should win more game with Kobe playing, which brings us back to the summer-long debate. Is that a good or bad thing? Is squeaking into the playoffs worth diminishing the value of a precious 2014 draft pick?

Sure, it's fun watching the team win. Sure, it'd be great to watch the guys pull of the "us against the world" theme, band together, and try to win more playoff games than they did last season with Dwight. But at what cost? Yeah, the Lakers probably won't be bad enough to have the highest percentage chance at landing at the top of the lottery, but moving up and improving odds certainly doesn't hurt. The franchise is at a crossroads where they need to draft the right guy this year, and the higher they are in the draft order, the higher the chance they can find that guy.

It's not just about landing an Andrew Wiggins or Jabari Parker. It's about having more options on the board once those guys are gone. It's about giving the scouting department, Jim Buss and Mitch Kupchak the best possible odds at landing the right player as the rebuild and/or reload.

Losses hurt in the short term but help in the long term under that light.

But there's the on the other other other hand factor in play here. Kobe Bryant needs to come back and prove he can be elite. His legacy is obviously intact and this wouldn't be a question if his Achilles didn't twist the franchise's fate a bit. Now he has to go out and prove he's still got it after the injury. He has to prove that for all the barking and expectations he will hold for his teammates -- no matter how established they may be outside of Los Angeles -- that he can still hold up his end of the bargain. He has to prove to those guys on the fence about where they want to sign -- or don't want to stay -- that there's reason, now, to play for the Los Angeles Lakers.

The NBA's landscape is shifting. New powers are sprouting, like the Indiana Pacers, and old powers are recuperating. Maybe those teams with new found success won't have the financial flexibility to sign an impact player, but there continues to be proof that you don't have to be in Los Angeles, New York or Boston to find success. There's reason to want to play in New Orleans with Anthony Davis, Cleveland with Kyrie Irving, Portland with Damian Lillard and LaMarcus Aldridge.

What better way to prove the franchise isn't far off than Kobe coming back and propelling the team to the playoffs? Without Dwight. With a broken Nash. Without Pau Gasol being an effective second banana, at least in the scoring department. The Lakers could have a reasonably recovered Kobe Bryant and a team that exceeded expectations and made the playoffs checked off in the "what have you done for me lately" column when a player is considering his options.

That sounds a heckuva' lot more appealing than "got swept with Dwight who had a fairly public falling out with Kobe, missed the playoffs the next year, unsure if Kobe can be effective after a career-altering injury."

Much like things have been the last few seasons, there's no way to project what comes next. The situation is complex with questions that won't be answered until the season ends and everybody starts showing their hands. The first step, literally and figuratively, is Kobe Bryant getting back on the court. None of this will matter when he does, though. All the questions, all the ways this season, this summer, the future, and the draft might go will be meaningless.

For all the complexities, it'll be as simple as this: Kobe Bryant is back on the court. Right where he belongs.