The last time Detroit visited Staples Center the Lakers picked up their first win of the season. Times done changed.

Share All sharing options for: Lakers vs. Pistons preview: Welcome back, Detroit

Plot: A long, long time ago the Los Angeles Lakers were down and out early in the season. They lost every one of their preseason games and the first three games of the regular season. Then, the Detroit Pistons came to town on Sunday, Nov. 4 2012. The 2012-2013 Lakers picked up their first win (yay). Mike Brown was fired after loss to the Utah Jazz less a than week later.

Things have drastically changed for each team since their last meeting in Los Angeles. The Pistons went out and picked up one of the best defenders and worst chuckers in the league in Josh Smith. The kind of player who makes you wonder when great defense isn't enough to overcome terrible shot selection. Seriously, he has taken more above the break threes than shots at the rim. Smith is putting up 5.8 threes per game while shooting 28.3 percent from beyond the arc. This is the ultimate inflation of Metta World Peace: 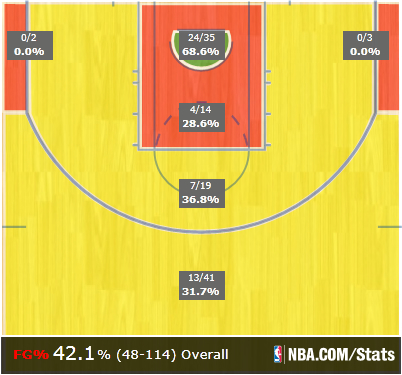 Detroit is off to a 3-5 start in the Brandon Jennings-Josh Smith era. Suffice to say, the experiment has not gone well. Their floor spacing suffers when they play Greg Monroe, Andre Drummond and Josh Smith together. Jennings is shooting just 38 percent from the floor while attempting a team-high 16.8 field goals per game. Meanwhile, Drummond is shooting an efficient 64.4 percent from the field and averaging the least amount of shots in their starting lineup.

There are problems. It is obvious.

Detroit still figures to give the Lakers trouble on both ends of the floor, however. With such a high volume of shots coming from Jennings the Lakers' point guards will feel constant pressure. Steve Blake has been playing pleasantly well this season, and is scrappy if nothing else, but I've watched one too many reasonably-well defended shots sail through the net while he's been a Laker. Must be a wingspan thing.

Monroe will be a challenge for the Lakers' frontcourt. The Pistons play big, the Lakers have a trio of bigs they can rotate in and out of lineups through the game. Much like the point guards, the bigs will deal with pressure all night on defense. On offense, the "advantage" the Lakers generally have with a pair of centers on the floor at all times is diminished.

Maybe this game wont come down to who makes the most shots though. Maybe it'll boil down to who controls the glass on all those misses.

On the other hand, the Pistons are the top-ranked team in offensive rebound efficiency, grabbing 31.4 percent of their misses. Maybe Pau isn't shooting well. Maybe he's not protecting the rim against dribble penetration. He is rebounding on defense at an extraordinary rate, though, pulling in 33.1 percent of all available defensive rebounds. That's second in the league, behind only Kevin Garnett.

Plenty of interesting match ups to watch tonight. Hopefully the Lakers keep the positive vibes rolling a day after Kobe Bryant practiced with the team for the first time.