Steve Nash's body is betraying him

The 39-year-old point guard, once point god, has become a mortal man. What comes after the fall from Mount Olympus?

Share All sharing options for: Steve Nash's body is betraying him

It's been 495 days since the Los Angeles Lakers traded some "throwaway" draft picks and a trade exception they needed to get off their hands after dumping Lamar Odom to the Dallas Mavericks for the all-world talents of Steve Nash. 495 days since the Lakers signed-and-traded for a "real" point guard after a failed experiment featuring Ramon Sessions' 2012 Playoffs nosedive.

It's fair to say things have changed since then.

Those "throwaway" picks were two future second-round selections and two future first-round selections. In case you missed it, folks are salivating over the Lakers having a 2014 first-round draft pick this summer. There's no telling what the next handful of years will look for the Lakers with Pau Gasol and Kobe Bryant's expiring contracts and Steve Nash's expired body, but the peep hole we've peeked through so far has been disheartening. Maybe the top-five protection on the 2015 first-rounder will be the saving grace in this mess.

Nash to see back specialist Monday 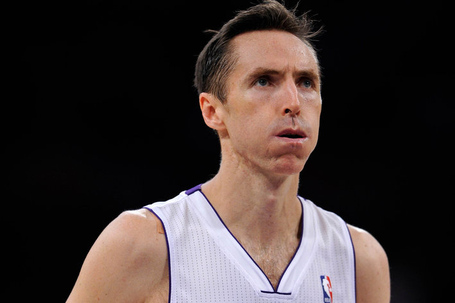 Steve Nash will meet with the same back specialist who performed surgery on Dwight Howard and Peyton Manning to explore nerve damage to his back that forced to miss the second half of Sunday's game against the Timberwolves.

Last season you could say the Phoenix Suns won the deal as soon as Nash busted his leg, proceeded to miss 32 regular season games, then missed half of the playoff sweep. This year? It looks like the Suns fleeced the Lakers as the "point god" has become a mortal man. The fall from grace has been painful to watch, and Phoenix couldn't turn down an offer to walk away before they had to witness it first hand.

Nash's latest battle against his body stems from the same injury that put a damper on the Lakers' season last year. Back injuries can ruin careers and Nash will meet with the same doctor who performed surgery on Dwight Howard and Peyton Manning. We'll likely have an update on the situation over the next 48 hours.

The immediate quotes didn't sound promising after the Lakers' loss to the Minnesota Timberwolves. Nash called it an "emotional" time and didn't want to talk about his back after the game, which is about as ominous as a back injury to a 39-year-old professional athlete can sound.

The decision will ultimately be Nash's to make on what comes next, but his body is making a steady case to give it a rest after years of laying on the floor to curb his spondylolisthesis so he can do the damn thing like few have on a nightly basis. Unfortunately, doing the damn thing hasn't been a thing in Los Angeles, and he's still due $9.7 million next season.

Put it this way -- Nash is averaging 6.7 points per game on 26.1 percent shooting from the field. That was before the recent flare up of his nerve issues after just eight games and a summer away from basketball. What will his body feel like in game 50? Game 80? Next season? Nash recently sat down with CBS Sports' Ken Berger and had this to say about his future

Q: Can you give people some insight into exactly what it is you're going through just to get yourself ready to play - as far as therapy and treatments?

A: It's OK. I've accepted it and enjoy it and embrace it as a process. It's been educational and it definitely takes a lot of will power, but I don't mind making the sacrifice. The energy and effort and commitment is something that I enjoy. But going through the pain some days? Going through the pain combined with not being able to do what you want to do out there? That's the inevitable equation that everyone faces at the end of their career - or a lot of people face at the end of their career. That's something you have to deal with, but right now I still enjoy being a part of the team and trying to fight to give my team something.

Q: So in your mind, retirement is not a word that you ...

Nash has been in the league 17 years. Basketball is in his rickety bones, burrowed into the marrow. While some are calling for Nash to retire -- to quit on his lifelong passion and craft -- I'd like to urge caution. I'm not suggesting he's ever going to get over the physical issues he faces and ever become a shadow of a shadow of his former self, but the decision is his alone to make on how he deals with the final 18 months or so he's under contract in the NBA.

The only visual that keeps running through my mind after hearing about Nash pushing his body up and down the court Sunday night until Mike D'Antoni pulled him out, then calling the situation "emotional" is Kobe Bryant's post-game interview after tearing his Achilles against the Golden State Warriors:

Basketball is his craft and the man was incredible at it. Nash never had a chance to put on "the show" for Los Angeles, but every quote, every interview and every sign points to him desperately wanting to ride that wave again. To have the crowd roaring, the opponents throwing up their hands in disbelief and his team thriving together.

If not for Los Angeles -- a city he's only played a total of 60 games for -- for himself, which is fine. He's given so much to the fans, to the sport and to his teammates he deserves that opportunity. But the NBA is a rapidly-changing environment. The generation that came after Nash and Kobe is all grown up. Now, the generation that came after them is quickly on the rise.

Anthony Davis is already looking like a frontcourt force, Paul George is putting up insane numbers with the 7-0 Indiana Pacers, there's a seemingly endless grab bag of insanely talented point guards still learning the intricacies of the game from Kyrie Irving to Michael Carter-Williams. And the influx of talent will never end. Each year another opportunity for the next big thing in the NBA to enter the scene.

The passion still burning, the rhythm of the game in every step you take, but the body stabbing you in the back.  Oh, the treachery of age.