The Lakers have dominated the Timberwolves over the last five years or so. Hopefully that trend continues Sunday.

Share All sharing options for: Lakers vs. Timberwolves preview: Keep the streak alive

Plot: The Los Angeles Lakers head home after a disappointing loss to the New Orleans Pelicans on the second half of a back-to-back. A certain seven-foot Spaniard looked like he was ready to get home and recuperate after the three game road-trip, and now the Lakers rock their Sunday whites tonight against the Minnesota Timberwolves.

For whatever this crazy stat is worth, the Lakers have won the Timberwolves 22 times in a row. You'd have to go back to March 6, 2007 to find a loss (double-overtime).

While there's no Anthony Davis to beat the Lakers on both ends of the court, the Wolves' frontcourt is uniquely challenging. Nikola Pekovic is essentially a bear wrestler who will get physical with Pau and the Lakers' bigs while Kevin Love is off to a ridiculous start. Love is averaging 27.2 points and 14.5 rebounds per game through six games.

The Lakers have plenty of work to do, especially on offense. How bad has it been? Here's a frightening stat: the Lakers are averaging 98.1 points per 100 possessions (27th out of 30 teams) while their defense is allowing 105.4 points per 100, according to Basketball-Reference. We expected the defense to be bad, but the fact that the offense is even worse?

I know it's easy to pick on him, but Pau Gasol has been a travesty to start the season. He's currently averaging 12 points per game on 35 percent shooting. You want blood? I'll give you blood: 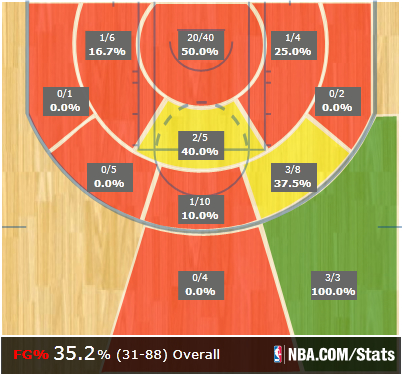 The mid-range isn't there. The low-post isn't there. At this point it's almost within reason to park Pau at the right corner of the break to just launch threes and space the floor for Chris Kaman. Yeah, I went there, here's Kaman's shot chart in comparison: 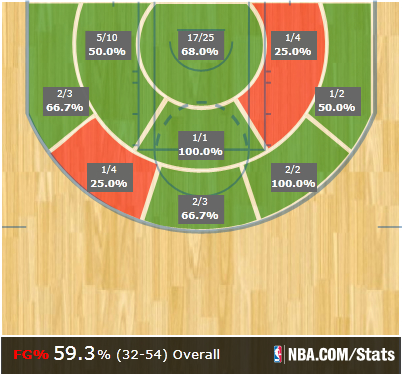 Of course the Lakers have all kinds of issues. Steve Nash is shooting 27.9 percent from the field. The team is averaging 16.1 turnovers per game. The rotations are still a giant work in progress. But hey, let's be honest, the fact that they're 3-4 is impressive in and of itself. The first seven games weren't easy by any stretch of the imagination, and if you told me they'd win three contests (including the games against the Rockets and Clippers) I'd be smitten.

But it's hard to just enjoy the crumbs and not want more. The Lakers have a chance to compile an even record after the second week of the season which would be a huge accomplishment for a team trying to find legitimate basketball skills from Xavier Henry and Wesley Johnson.

Six of their next seven games are in Staples Center after hitting the road for four of their first seven, which could make a world of difference for a team still in it's infancy stages together. A nice chunk of home games begins now, providing a window for the Lakers to even out the ship in Los Angeles.

Ozzy Osbourne - Bark at the Moon

- Check out Canis Hoopus for all your Timberwolves needs