Lakers vs. Warriors preview: A back-to-back in the bay

The Lakers have their first back-to-back of the season after a wild opening night victory over the Clippers.

Share All sharing options for: Lakers vs. Warriors preview: A back-to-back in the bay

Plot: The first game of the Los Angeles Lakers' season has come and gone and the purple and gold did more than just survive. They thrived as a unit and gave the Los Angeles Clippers a nasty black eye to start what's billed as a "big" season for their franchise.

But the start to the Lakers season is dark and full of terrors, and they begin with a back-to-back that has sent them up the coast to face the Golden State Warriors Wednesday night. Oracle Arena is going to be bonkers for a team with raised expectations after "arriving" in the playoffs last year and sending dead weight contracts along with picks out  to Utah while keeping their tangible assets to acquire Andre Iguodala.

Steve Nash is still a game time decision, according to ESPN's Dave McMenamin. Festus Ezeli (knee) and Harrison Barnes (foot inflammation) will be out for the Dub's season opener.

On the other end the Warriors have Iggy to put a stop to those pesky Xavier Henry and Jordan Farmar drives. It was great that those two were attacking the paint, but Iguodala isn't Jared Dudley or Darren Collison -- he's one of the league's elite wing defenders and I doubt very much he wants to be part of a Xavier Henry highlight reel.

Things don't get much better for the frontcourt players with Andrew Bogut under the rim to match up with Pau Gasol. His sheer size alone make him a tougher match-up than DeAndre Jordan and Blake Griffin and he's more agile than he gets credit for.

It's going to be a tough game for the Lakers, especially after seemingly blowing a limit break of energy last night against the Clippers, but perhaps that momentum can carry over. Perhaps confidence is high and the team can continue performing at the insane level they did in Game 1 of 82.

Win or lose, one can only hope that the team puts forth the kind of effort they displayed last night. That was way too much fun, as exemplified by Mr. Steve Nash: 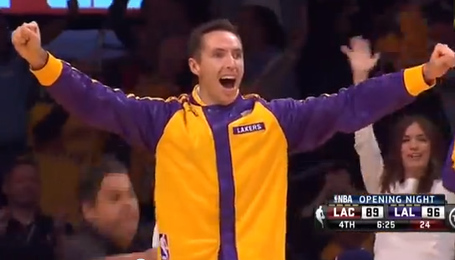 (Coincidentally that was also the pose I was trapped in during most of that fourth quarter run).

- Check out Golden State of Mind for your Warriors needs