Welcome to the Lakers Tweetbag, where we compile a handful of the most interesting tweets from the Lakers beat writers throughout the Twittersphere. This is a prime cut from the people who follow the in's and out's of the purple and gold for a living. Enjoy the tweets, the create-a-caption, the goodies, and a wrap-up of all the writing here at Silver Screen & Roll after every game.

D'Antoni: "You could feel the energy of guys rooting for one another. Last year it was cold"

Just 1 game, but gotta give D'Antoni some credit for how hard and cohesive the team played. RT @VikHoops14: thoughts about this years Team?

Doc called Jordan Hill "the toughest guy on the floor" all night. Said he and Farmar were the difference makers. BK

Doc Rivers on Lakers' night after all the preseason slights: "You knew they were going to play like this was the world championship."

Fun to watch a team play with great emotion and purpose. Laker game was played for the faithful…now it’s on.

Remember to REC your favorite caption in the comments! 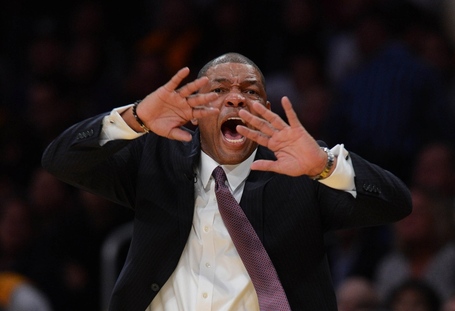 (The celebration after a successful Jodie Meeks layup)

The Latest at Silver Screen and Roll: