Every year, Jeff Clark of CelticsBlog rallies the troops of the NBA blogosphere into a comprehensive, unified preview of every NBA team. This is our annual contribution, to be considered the layman's preview, with considerably more to come in the next few weeks.

1. What significant moves were made in the offseason? 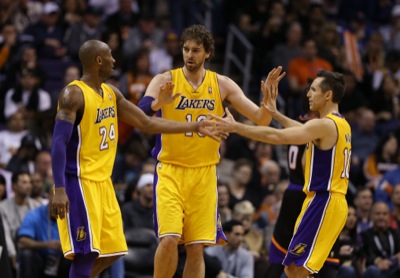 No moves made in the offseason can be discussed without addressing the move the Lakers had no part, and no desire, in making. The Lakers' only offseason priority was the re-signing of Dwight Howard, erstwhile superstar, to a large and franchise-cornerstone-establishing contract. It ... didn't work out. Dwight is now a resident of Texas, and the Lakers were left holding the bag. Because the Lakers were over the luxury tax, even after Dwight's departure, they were unable to offer anything to the free agent hoards besides a single mini mid level exception contract. Everyone else would have to come on board for the veteran's minimum. And because that wasn't difficult enough, the Lakers needed to maintain their cap space in 2014, when just about their entire current roster gets blown up atom-bomb style.

Considering the circumstances and the limitations, the Lakers front office pulled in a pretty decent haul. The mini-MLE was dropped on Chris Kaman, and while questions arise over where exactly he fits in a big man rotation already containing Pau Gasol and (theoretically) being designed around coach Mike D'Antoni's small-ball preferences, you certainly can't argue the value of Kaman on a one year deal worth roughly $3 million. From there, the moves make even more sense: Jordan Farmar as a push the pace backup point guard, Nick Young as Kobe Bryant replacement while Kobe is on the mend, and Wesley Johnson as athletic defensive small forward who, if the Lakers are really, really lucky, might not be terrible. Every one of them is a risk, but considering all of those players signed for the veteran's minimum, and all did so on one year deals, its a fairly impressive bit of business.

2. What are the team's biggest strengths?

In theory, the Lakers still maintain an All-Star caliber trio that should make them competitive enough to win some games, and you'd be hard pressed to find three better offensive players on the same team in the entire league. All three may have lost a step, and all three are coming back from a season in which they lost a great deal of time to injury, but their combined best might still be something special to watch, especially if Steve Nash and Pau Gasol can infect the team with their magical brand of passing-friendly basketball.

Other than that, the only other strength the Lakers could be considered to have is the lightened load on their shoulders due to lessened expectations. After last year, in which a great deal was expected of a team that ended up spending most of the season looking like a social experiment in shared misery, nobody expects much of anything from this year's team. Combine that with at least the opportunity to have better health this season, and the Lakers might be capable of surprising us all ... but probably not.

More: All of SB Nation's NBA previews to date

3. What are the team's biggest weaknesses?

Aside from their reliance on three stars in their waning years who all struggled with injury the year prior, the Lakers only have one weakness that matters, but boy howdy, does it matter a lot. The Lakers will not be very good at defense. And by not very good, I mean legendarily, horrifically, monumentally awful. Last year, the Lakers ranked 20th in overall team defensive performance despite having two of the best defenders of the last decade, both of whom are no longer with the team. Granted, Dwight Howard was nowhere near his defensively dominant self last year, and Metta World Peace hasn't been an elite defender since he changed his name, but the Lakers lost the only two players on last year's roster who could even consider defense a strength, and last year's team was one of the league's worst teams defensively. Metta World Peace will be replaced by Wesley Johnson (kind of a wash) and Nick Young (yikes!). Dwight Howard will be replaced by Chris Kaman (holy freaking crap). And unless the Lakers spent their one "special" (i.e. non-veteran's minimum) contract on a player who they only plan on playing 10-14 minutes per night, you can bet there will be times when Pau Gasol and Chris Kaman will see the court at the same time. The Terra Cotta army might be more mobile than the Lakers' front court.

4. What are the goals for this team?

The Lakers front office has made the goal for this team abundantly clear. Win as much as possible and be as successful as possible, all while keeping one eye on next year. They may not have a very compelling team on paper, and they may not be laying the same expectations in private that they are discussing in public, but the message has been fairly consistent: We are the Lakers and we do not expect anything less than business as usual. That means a decent playoff run and the possibility of a championship.

Here in the real world, however, we know the Lakers are nowhere close to a contender. Just making the playoffs would be right on the cusp of over-achievement, and that is assuming a level of health the Lakers have no right to assume when considering the advanced age and current injury status of their primary players. So the stated goals here are quite different: Let Kobe come back in as relaxed a manner as Kobe will allow, learn whether some of the bit part additions (like Jordan Farmar) fit well under Mike D'Antoni's system and who might qualify as future assets, and do the best you can without over-extending anybody (no more 48 minute nights, for any reason). If the team makes the playoffs, cool. If they don't, no big deal. And if the Lakers decide its not working and move Pau Gasol, feel free to suck as bad as you want. This is a rich draft class in which the 8th pick might not be as good as the 2nd pick, but is still pretty damn good. If the Lakers need to make a strong push just to reach .500, I won't be mad if they try to go the other way.

5. On what criteria can we judge Mike D'Antoni?

For more further fleshed out thoughts on this subject, see yesterday's post, but in a nut shell, the Lakers front office has left themselves in a precarious position. They have a coach who was given a terrible hand to deal with in being hired mid-season, in the midst of one of the worst injury-plagued seasons in franchise history, and placed on a team with way too much ego and nowhere near enough chemistry. All that said, it's tough to argue the coach did very well. Now, the front office has essentially built their team in such a way as to say "This year really doesn't matter very much", so the coach can not be held accountable if the team piles up the losses.

But Coach Mike D'Antoni must be judged. He cannot simply be given a pass, because the Lakers' #1 priority in the upcoming nine months is to ensure they have the coach they want to lead them into the future come July 1, 2014. Their whole team building strategy is leading up to that day, so they cannot afford to have the wrong man at the helm by then. D'Antoni has a lengthy list of both pros and cons at this point, and the Lakers must figure out a way to determine which list carries more weight without reacting too harshly if the Lakers suffer through another regular season in which the wins and losses don't approach the franchise's normal status quo. Make no mistake, deciding whether to keep or fire D'Antoni at the end of this season is the most important decision Jim Buss has ever had to make, and he will have to make it without the benefit of the most obvious set of data points, a win-loss record.

Bottom line: With so many risks and gambles brought in to fill the roster's holes, and with a severe over-reliance on three 30+ stars who may not be capable of playing 82 effective games, this year's Los Angeles Lakers could land anywhere from plucky bottom rung playoff team to abject disaster/high draft pick accumulator. If the Lakers get lucky health wise, it'll probably be something closer to the former, and if they don't, something closer to the latter, but this team will not resemble anything close to what is expected in Laker land. But once it's over, none of it will matter, because the season's end brings with it a complete annihilation of the roster, and a blank slate with which to start all over again. This season is about the ride, not the memories.