The Los Angeles Lakers haven't won a game in 2013 and look to do so against the San Antonio Spurs Wednesday night.

After losing to the Houston Rockets last night the Los Angeles Lakers get after it again in San Antonio as they take on the Spurs. Last night the Rockets took full advantage of the Lakers lack of a paint protector as they scored 60 points in the paint to the Lakers 44. Robert Sacre, Antawn Jamison, and Earl Clark weren't able to do much to keep the Rockets out of the restricted area. Compounding this problem is the Lakers lack of perimeter defense.

So, now, they face the Spurs. A night after facing the #1 paced team in the league they must now go up against the #2 paced team. Fantastic.

The San Antonio Spurs are the anti-Lakers. Squeezing all of the orange juice they can out of players like Gary Neal, Tiago Splitter, Danny Green, and Kawhi Leonard. In doing so they've gotten off to a 27-10 start, have the #5 ranked offense in efficiency (109.6), and the #4 ranked defense (101). They're also the #1 ranked team at defensive rebounding. Suffice to say, the Spurs are good.

The last time these two teams faced seems like an eternity ago. It was November 13th at Staples. The Lakers played a solid game, out-rebounded the Spurs, and held them to 84 points. It wasn't enough, though, and Danny Green hit a go ahead shot over Kobe Bryant from deep to seal the victory. At the time the Spurs were 7-1 and the Lakers were in the midst of their Bernie Bickerstaff vacation with a 3-5 record.

Now, the Lakers must try to improve upon that result without Pau Gasol, Jordan Hill, and Dwight Howard.

The Spurs are an extremely balanced team. They lead the league in assists, are 5th in the league in three-point shooting percentage (38.6%), and 2nd overall from the field (48.4%). Unsurprisingly, they take and make good shots within their offense. Just a quick glance at their team shot chart... 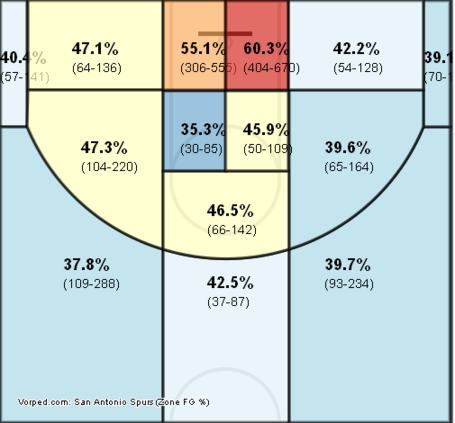 And it's evident that they're playing extremely effective basketball on the offensive side. Partner that with their defense and the Lakers have a difficult task to pull out a W in the second half of a back-to-back on the road. Last night the Rockets shot 55.2% from the field and 44% from deep. Tonight? The Lakers cannot allow the Spurs to put up percentages akin to that.

Tony Parker, Tim Duncan, and Manu Ginobli continue to be the three pillars for the Spurs. While they are the top three scorers for San Antonio they also average a meager combined 28.8 minutes per game. Tim Duncan is having a monster of a year on the defensive glass grabbing up 28.5% of available defensive rebounds when he's on the floor. Duncan also has a per of 25.1 in his limited 29.2 minutes per game. Duncan, much like the Spurs, just keeps on trucking.

The Lakers haven't won in 2013 and are currently on a four game losing streak. Their next game is against the Oklahoma City Thunder on Friday; the start of a four game homestand that concludes against the Miami Heat. At 15-19 that eighth seed in the Western Conference is ever fleeting with no signs that this is going to turn around dramatically any time soon. The Spurs had a day off to rest after losing the New Orleans Hornets on Monday and are 14-2 at home.