The Los Angeles Lakers didn't have much cap space to work with this Summer but they still brought in a handful of players to try and fill out their roster. Some have been great, others... not so much.

We're back with another SB Nation NBA theme day! Today across all of our network team blogs we'll discuss the free agency signings from this off-season, and where they are today with it. Is it working out? Has it gone terribly wrong? Or, is it to soon to tell? With the Los Angeles Lakers being well over the salary cap threshold this summer (much like every other summer) they were only able to make a handful of moves. One of their signings has been optimal, while two have provided a mixed bag of results, and one has been a disaster. Without further adieu, it's time for the (nearly) mid-season progress reports on the freshly signed Lakers!

Devin Ebanks is the Lakers biggest misstep this Summer. While Ebanks gained a reputation to be a defensive stopper on the perimeter last season, the only thing he's defending currently is his seat on the bench from Robert Sacre dance moves. He's played in 15 games this season, is shooting 31.1% from the field, and 18.8% from deep.

At times Ebanks doesn't appear to be an NBA level player. It's now his third year in the league and he still has nothing particularly specific about his game that stands out as "NBA" talent, which is a problem. The issue for the Lakers, however, is Ebanks was the only small forward they signed in the off-season. To hide him on the bench Mike D'Antoni has taken to playing Kobe Bryant extended minutes at small forward. The only saving grace in this deal, if at all, is that his contract is only slightly over $1 million and is a one year deal. Without many other options the Lakers almost had to bring Ebanks back into the fold as they parted ways with Clippers small forward Matt Barnes. 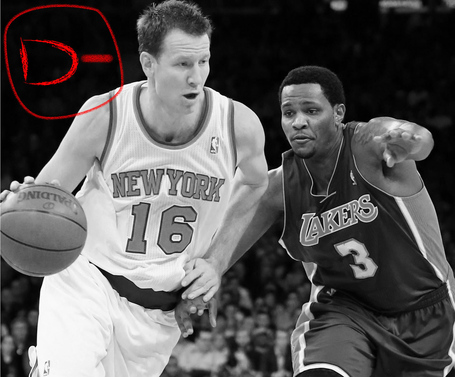 (Side note: The defensive stopper Devin Ebanks getting blown by by Steve Novak)

Antawn Jamison has been just as confused with his season as we are here at Silver Screen and Roll. When he was first brought on for the veteran's minimum it seemed like a brilliant move. The Lakers were going to run the Princeton offense and Jamison had already played in that system. With his mix of offensive versatility and familiarity in what the coaching staff was trying to accomplish his role was clear cut. Be that guy off the bench, a role the Lakers were severely lacking last season for the most part (Matt Barnes aside). With the coaching change and Mike D'Antoni trying to find a rotation that works, Jamison suddenly became that guy on the bench. Despite playing well when Pau Gasol first revealed he had tendinitis in both of his knees, once Pau returned he found himself back on the outside looking in as he collected DNP - CD's.

Defensively Jamison makes an effort to be more than a turn-style, however, he's deficient in that aspect of his game. He's too small to bang down low against post players and too slow to handle players on the perimeter. While he is considered a "stretch" player, his percentage from beyond the arc is dramatically under his career average. Shooting 30.8% from deep is more of a liability than a skill to use on the floor (his career average is 34.6%). With a Lakers team that can't, wont, and doesn't get back in transition defense those clanked threes are painful.

6.7 points per game and 4.2 rebounds per game at the veteran's minimum, below average defense, and an inability to stretch the floor consistently. It's not a wonder as to why he isn't finding more playing time with Mike D'Antoni, in particular when considering another player who will be discussed here shortly. At the time it was a low risk, high reward signing. Thus far the Lakers have to be grateful that, at the very least, it was low risk. The rewards haven't been anything worthwhile. 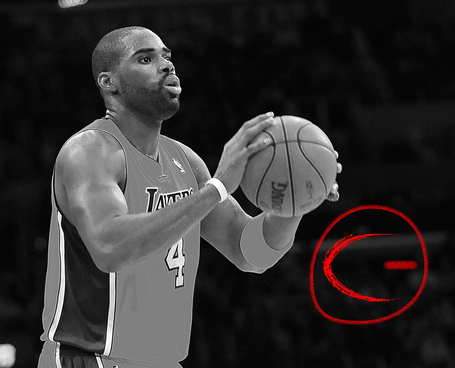 While the Lakers tried to fill the gaps in their "super" roster one of the necessary pieces was a wing player who could stretch the floor. Without money to throw around options were limited, but when Jodie Meeks was finally signed on his one year $1.4 million contract it seemed as if the purple and gold had found their sharpshooter. Meeks, a shooter by reputation since his days in Kentucky, would have perhaps the most clear cut role of all Lakers: stand behind the line and shoot the three. While a player like Antawn Jamison was going to be looked at for his entire bag of tricks, Meeks was to be a one trick pony. An important trick, mind you.

It hasn't exactly played out that way for Jodie Meeks, though. He's become infamous for driving from the perimeter to the rim like a dog chasing a squirrel, and has repeatedly been hammered in Ben Rosales' Beast or Burden series here at Silver Screen and Roll for doing this.

Still, even with Meeks inability to finish at the rim and persistence in trying to do just that, he's been a solid player for the Lakers off the bench. After being lost in obscurity under Mike Brown, Meeks has become the one consistent rotational player off the bench for Mike D'Antoni. While Antawn Jamison, Darius Morris, Chris Duhon, and Jordan Hill have all been off and on Jodie Meeks has continued to receive minutes. His effort on the defensive end is admirable for a team that severely lacks perimeter defense.

Jodie Meeks has come as advertised, hitting almost identical numbers from his season with the Philadelphia 76ers before becoming a Laker. 8.5 points per game, 37.7% from the field, and 36.4% from deep. If he can find a more consistent shot as opposed to having hot and cold streaks he'd be doing just fine. Consistency is not something this Lakers team has an abundance of, though. 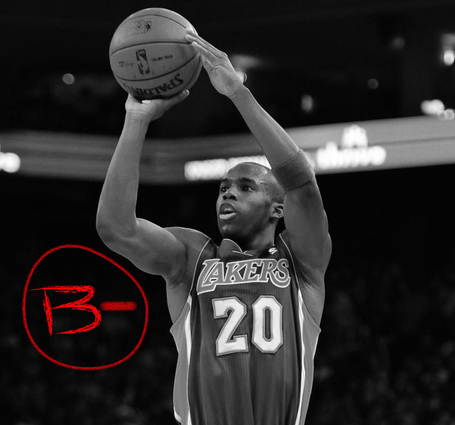 Jordan Hill has seen his playing time fluctuate through the season as Mike D'Antoni struggles to find a rotation that works for the Lakers. When Metta World Peace began playing backup minutes in the power forward slot Hill saw his playing time decrease. However, with the minutes Hill would get it was obvious that he needed to find more playing time. Since then Jordan has seen his role increase.

His rebounding percentages are phenomenal, particularly on the offensive glass. Jordan pulls down 20.1% of the available offensive rebounds when he's on the floor. That is an elite number in the league. The only players in the entire league (three players) that have a higher percentage have played a combined total of 39 minutes this season (meaning they were barely on the floor thus have an inflated %). The next closest player to him who has played 200 or more minutes is Timofey Mozgov at 18.3%, followed by Anderson Varejao (league leading rebounder) at 16.8%.

Jordan Hill was brought back at a bargain for what he provides this Lakers team. Making $3.5 million each of the next two years is an amazing value for a young hustle player, especially of the big man variety. The problem, however, has been finding him the proper allotment of minutes. Hill has played in 29 of the Lakers' games this season and is averaging a career high in minutes at 15.8. Simply put, this is why Antawn Jamison isn't finding minutes off the bench. Hill is far too valuable whether he's playing the power forward or center. His non-stop motor and willingness to throw his body around while the remainder of his teammates stand flat-footed are intangibles that are invaluable.

Still, he's injured currently, and because of his style of play finds himself dinged up regularly. His value is zero when he can't get on the floor and the Lakers need him on the floor. Likely more than he's averaging off the bench per game right now. 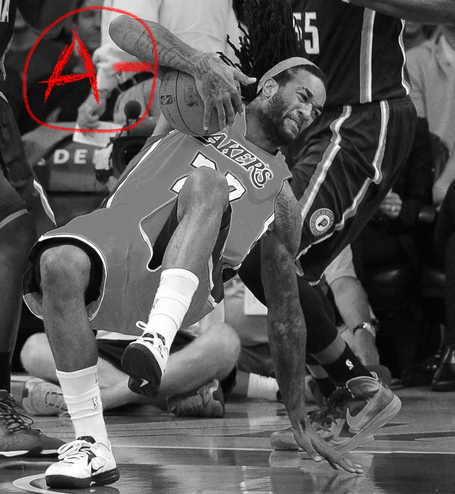 Overall, the Lakers did about as well as they could with the signings they made and no spare cap to throw at players. The dark spot on their off-season will forever be signing Devin Ebanks instead of finding another option. While Antawn Jamison may not ultimately be the sixth man type of player that the Lakers envisioned when they signed him, the fact that it was only a one year deal at the veteran's minimum makes it a justifiable gamble. Their two better signings, Jodie Meeks and Jordan Hill, have both been integral players off the bench and will need to continue being productive and growing into their roles if the Lakers are to find their way into the playoffs. The Lakers were clearly built around the talent of their starting lineup, but with their current record placing them out of the playoffs, their bench will need to help propel them back into the playoff race through the regular season. Plenty of games to be played still.

- All of the Free Agent reviews in one convenient location!