Pau Gasol had an awful game against the Clippers Friday night. We'll break down his field goal attempts on the night, take a look at his Synergy stats, and look at his shot charts from the last three seasons.

Share All sharing options for: Breaking down Pau Gasol's miserable night against the Los Angeles Clippers

Pau Gasol had a miserable night against the Los Angeles Clippers. His shots weren't falling, he was being worked on the defensive end, he wasn't getting to rebounds, and he was benched in the fourth quarter until Dwight Howard fouled out. So what exactly was Mike D'Antoni doing with Pau that had him shooting 1-6 from the field and looking out of place? Let's take a look at the six field goals, and then go over a few extra things, including shot charts, and a few stats from Synergy.

Right out of the gates the Lakers looked to establish Pau Gasol as a threat from long-range. Blake Griffin is matched up with Pau who is the trailer man here. Steve Nash is handling the ball and the Clippers are going to attempt to contain him. 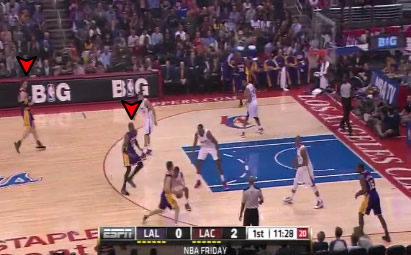 With DeAndre Jordan committing to cutting Nash's lane to the rim off Dwight Howard begins to cut through the key. Blake Griffin is forced to rotate over and help which leaves Pau Gasol alone on the perimeter. 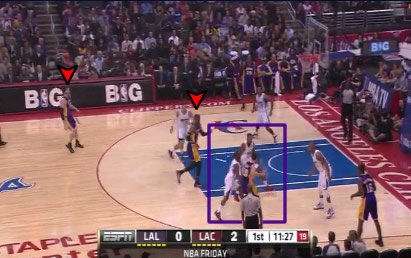 Steve Nash pulls his defenders as close to the baseline as possible and picks out Gasol who is hanging out humming Mumford and Sons to himself. Dwight Howard has decent position as well but the key is overcrowded. The Lakers spacing creates so much negative area that this 3 point field goal for Pau is as good as a shot during warmups. 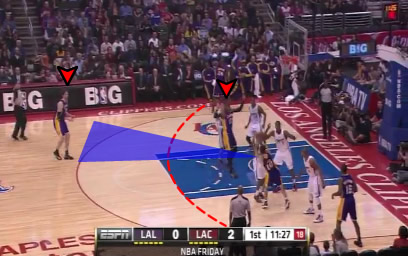 Blake Griffin is too far away to contest the shot but throws his hands in the air while waving them like he just don't care. No matter, Pau Gasol misses the open field goal attempt. Despite his recent "success" at hitting from distance, he's still far from a knockdown shooter from that range. Plain and simple this is a shot that's out of his comfort zone. 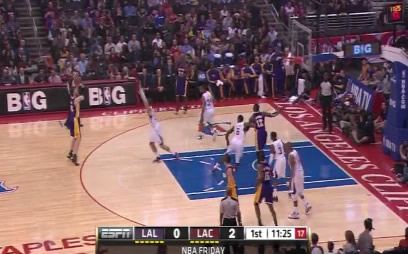 The Lakers turn to the coveted Horns setup for this play (both bigs at the elbows and the point guard at the top of the arc). Dwight Howard will be setting a screen for Nash in this particular set. 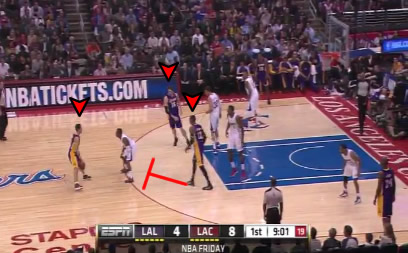 Notice anything similar? Just like the first play, the Clippers are committing to trapping Steve Nash which forces Blake Griffin to rotate and help on Dwight Howard who is diving to the rim. Pau Gasol will again be left alone, but this time not beyond the arc. 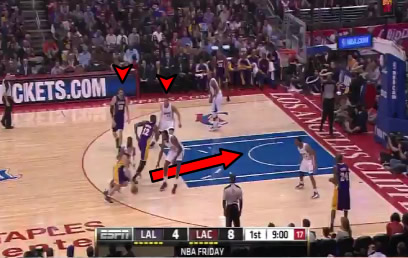 The same exact sequence of events occurs. Nash splits the trap with a pass picking out Pau who is just finishing up that darn Mumford song that's stuck in his head still. There's a TON of space created for Pau to hit this jumper. Worth noting is how nice this pass from Steve Nash was. This was a behind the back wrap around dime. 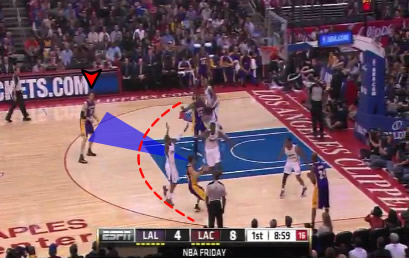 This time Caron Butler rotates and leaves his man in the corner alone (Metta World Peace). No matter, though, as Pau still has plenty of time and space to take the shot. This is his one, and only, field goal of the game. 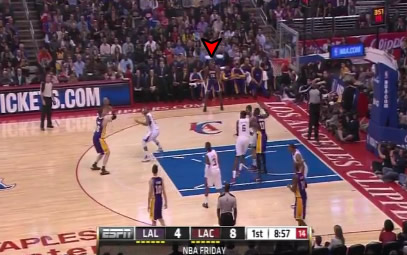 Pau's third field goal attempt was a spot-up three that wasn't remarkable in any way, shape, or form. P.S. he missed it.

Next up is some simple two-man work between Jodie Meeks and Pau Gasol. Morris slings the ball over to Pau at the top of the arc. 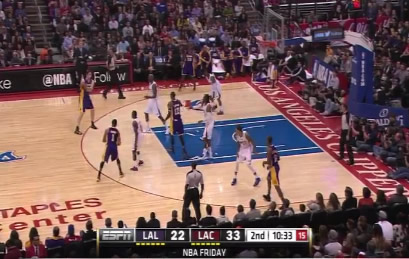 Pau swings the ball over to Meeks in the corner and they close the space between one another so Pau can set a screen. 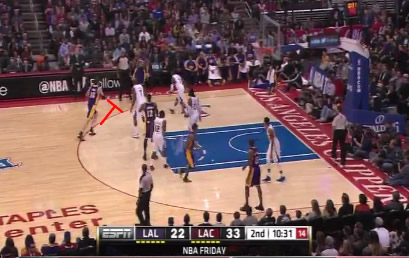 The screen itself is sealed off as to funnel Meeks into Lamar Odom. However, where Pau wants to be is directly behind him on the elbow. This is where Pau is most effective, as it's within his shooting range and he's a great facilitator from that position on the floor. With Odom committing to the ball handler Gasol will have space to operate should Meeks pass the ball back. 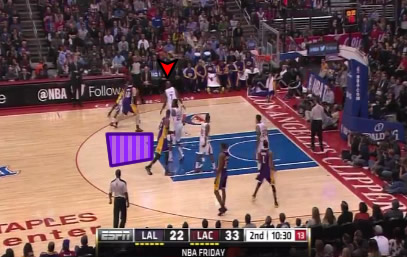 Meeks does, in fact, swing the ball back to Pau who takes the elbow jumper. Odom does a good job of contesting the shot, and it's another missed field goal for Pau. 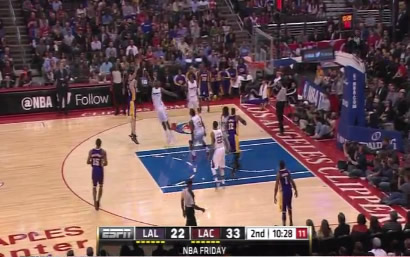 Ah, yes! Finally! Pau Gasol, in the post, isolated. This is his one pure post up of the game and Blake Griffin shall dance alongside the Spaniard. Pau gets the ball with his back against Blake. 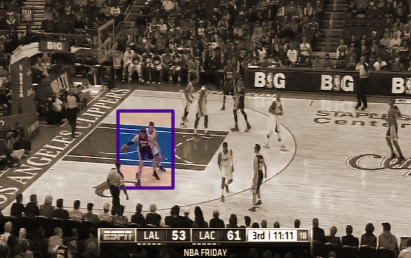 With the amount of distance from the basket in his position, Pau elects to face up the much younger Griffin. 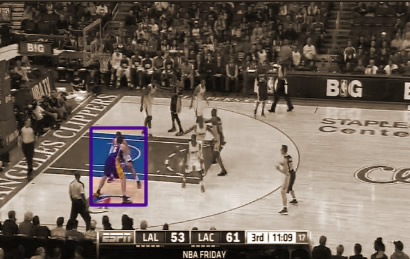 Pau attempts to drive baseline but Blake Griffin will have none of it. 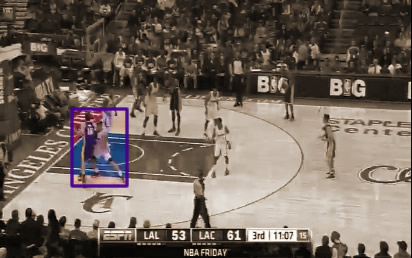 Gasol reverses and puts up a hook shot, but Griffin does a good job of contesting without the foul. The shot misses. 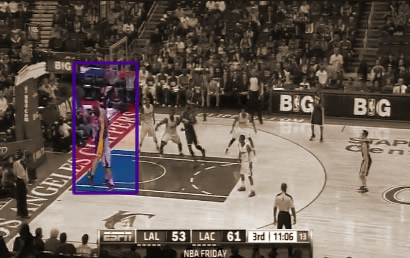 Kobe begins this play with the ball at the top of the arc. Pau sets a screen, and the Clippers elect to sag over the top. Gasol wants to move into the post which is cleared up. The catch here, however, is that Chris Paul has sagged off of Jodie Meeks something vicious. Paul is already camped in the key and ready to assist any screen slips into the paint. With the Lakers having a terrible night from deep there was much less concern with sticking on the perimeter, which causes spacing issues. 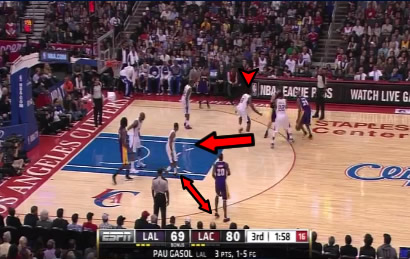 Pau begins sliding into the post. Chris Paul has left Jodie Meeks alone on the perimeter completely now. Kobe passes the ball to Darius Morris in the corner to create a strong entry lane for the pass to Pau. Lamar Odom has also begun cheating over to cut off Gasol. 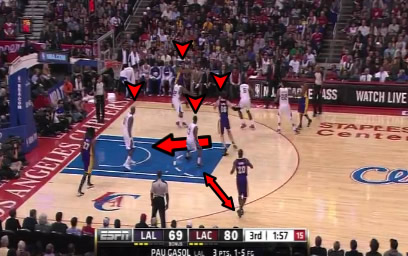 Pau finally gets the ball, but to his dismay he's instantly surrounded by three white jerseys. Not ideal. Jodie Meeks is waving to a fan in the distance. Jordan Hill is actually in very good position for one of Pau's patented interior big man passes with Lamar Odom all-in on defending him. 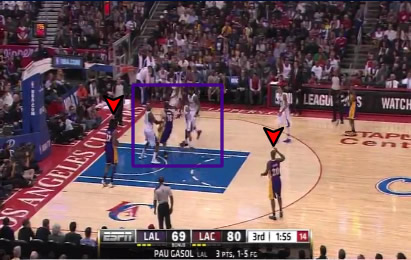 Regardless, Pau puts up a very sloppy looking shot attempt that had no chance of going in. With the Clippers having no respect for the Lakers shooters they collapsed into the paint in order to stop Pau. 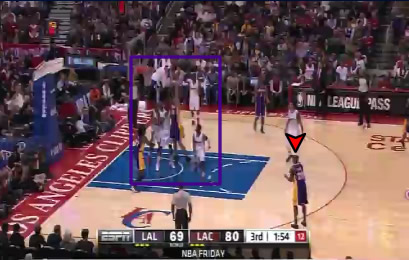 Clearly Pau struggled to find his rhythm offensively against the Clippers. This is an issue that simply will not disappear over time. Pau Gasol absolutely needs to be able to hit mid-range jumpers, specifically from the elbow. The fact that this three-point shooting wasn't dropping isn't a concern as that's an entirely different issue (he really, really, REALLY, shouldn't be spotting up out there). However, Pau is still an effective facilitator when the ball is in his hands. While he had only two assists, he's consistently been making plays with his passing since he returned from his tendonitis spell. It's nothing unfamiliar to see Pau making great passes, but it's difficult to put a value on that type intangible basketball instinct and ability. Here's a quick breakdown of a 1-4-5 pick and roll sequence that the Lakers ran.

The play starts with Steve Nash at the top of the arc and Pau Gasol moving down to set a screen. 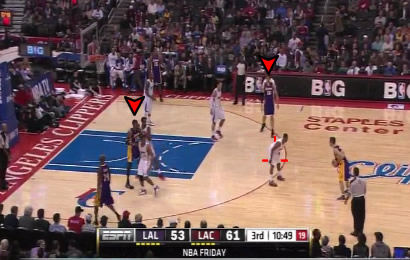 Pau loves the elbow, and the elbow loves Pau. As soon as he sets the screen he moves to his happy place. 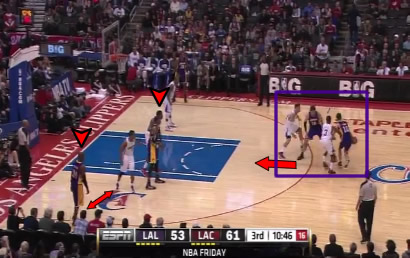 The Clippers again commit to trapping Nash, but he's fully aware of where his target is and he passes the ball over to Pau at the elbow. This is where the mismatch begins, as now two defenders must defend Pau Gasol, Dwight Howard, and Kobe Bryant. Yeah, about that. 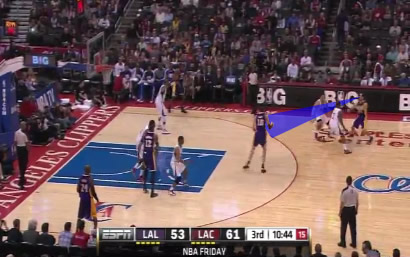 Both Clippers in the painted area move to trap Pau and from here it's a walk in the park. Dwight and Kobe are both completely alone. Pau tosses up a lob to Dwight. 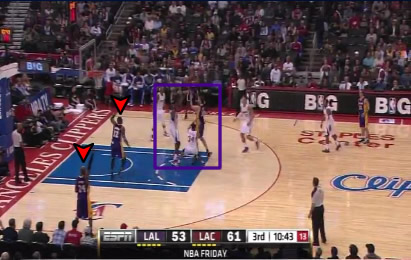 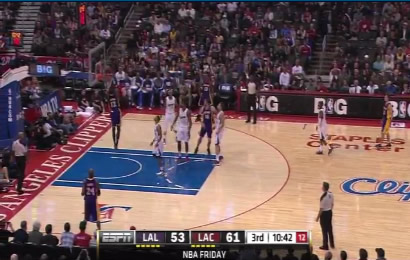 Pau Gasol can still contribute to the Lakers. The issue is, can he contribute $19 million worth of positive basketball play? Does he need to be in the post more? Where is he most effective? A common notion is that he needs to be in the post more often. That's a fair sentiment; Pau is a very fluid post player and can still dazzle with his arsenal of post moves. However, after taking a look at the numbers, they suggest otherwise. According to Synergy, Pau Gasol posting-up is worth .73 points per possesssion and he's shooting 30.8%. In spot-ups, however, he's at .87 points per possession, and shooting 41%. That's a 10.2% differential; a large gap.

However, with Pau not having a high quantity of post-up opportunities he clearly isn't able to get into a comfort zone. The Lakers, and Mike D'Antoni, are in a tight position right now with no easy way out. In a perfect world Pau Gasol would perform well enough to not be considered an issue. With Kobe Bryant having a spectacular season, Steve Nash to orchestrate, and Dwight Howard putting up solid numbers (but not Dwight numbers) while he still hasn't fully recovered, Pau Gasol simply has to not be a detriment to the team when he's on the court and make handful of plays a game. Hitting the open jumpers would go a long way as well. Having to flat out sit him through a fourth quarter in a tightly contested game is a problem, and that's essentially what Mike D'Antoni did as the Lakers closed the gap against the Clippers in the 4th quarter. That can't happen.

Before we wrap this up though I'm going to drop three shot charts from Pau Gasol. One from the current season, one from 2011-2012, and one from 2010-2011. The changes from 2010 to now is eye opening to one definitive truth: The decline is real. The clock is ticking. 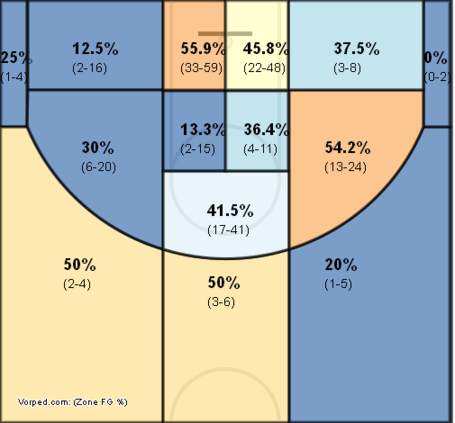 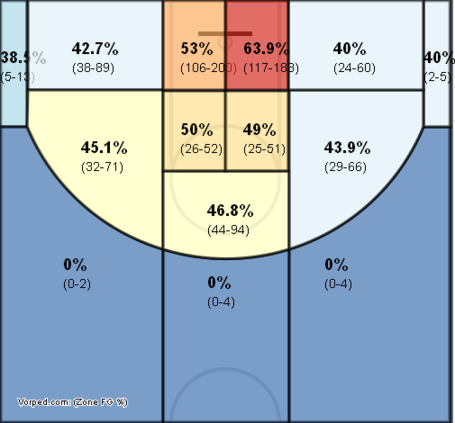 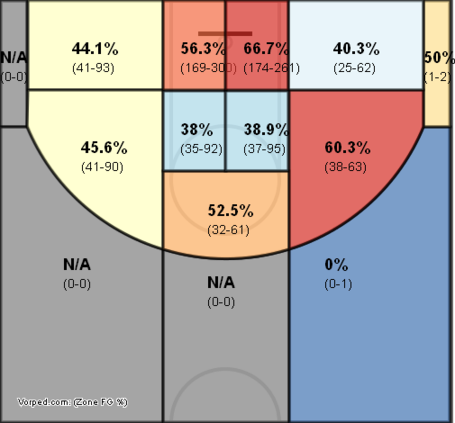