Breaking down the Lakers horrendous pick and roll defense

The Los Angeles Lakers have many issues, but perhaps most glaring is their defense when tested in the pick and roll. In this edition of The Playbook we'll take a look at play diagrams that detail how the Lakers are failing in these scenarios.

Share All sharing options for: Breaking down the Lakers horrendous pick and roll defense

The Los Angeles Lakers haven't been a very good basketball team this season. In fact, they haven't even been a good team this season as their record is now sitting at 15-20. It's been a season full of turmoil and perhaps it's simply cursed. However, the Lakers are still in the playoff hunt for the 8th seed, so maybe there's still reason to hang onto hope.

No matter what, though, their defense is the first, second, and third place they need to improve if they want to be contenders while earning their playoff spot. In particular, their pick and roll defense has been atrocious. They lack a distinct mix of effort, communication, and tactics when it comes to trying to stop teams who put them in a pick and roll scenario. We'll be taking a look at this facet of the Lakers defense in this breakdown.

The first two plays will be identical in setup but will vary in results. The first take will highlight the Lakers failure to communicate and have specific tactics when defending and rotating. The play starts with a high 1/4 pick and roll with Ty Lawson and Danilo Gallinari. 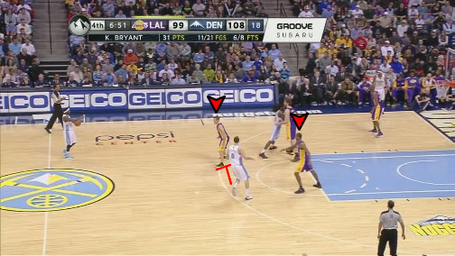 Steve Nash goes under the screen while Metta World Peace hedges hard to trap him. Gallinari is going to pop out to the corner of the arc and the remainder of the Lakers defense is tied up. Pau Gasol is attached to his man near the paint and Corey Brewer in the corner has Kobe Bryant handcuffed. 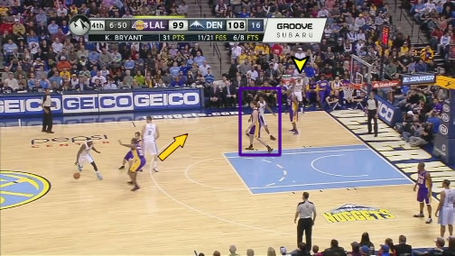 Metta World Peace goes WAY overboard with pushing Lawson away and now the Lakers defense is completely out of position. Steve Nash sits back to guard against penetration from Lawson, but if he isn't going to rotate then Gallinari is completely alone. Clearly both World Peace and Nash need to communicate better here, and they also needed to know how they were going to stifle this simple basketball play. 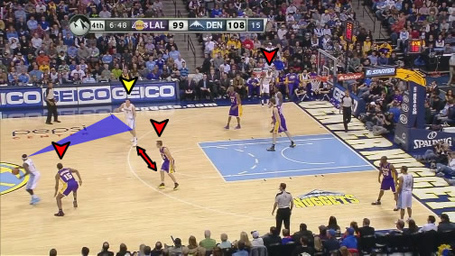 Ty Lawson makes the easy pass and Gallinari drains the three. The incredible amount of space he was given because of the miscue between Nash and MWP is unforgivable. MWP isn't the only one at fault here, as Nash isn't doing the Lakers any favors by standing there without a player to defend within seemingly a five mile radius. 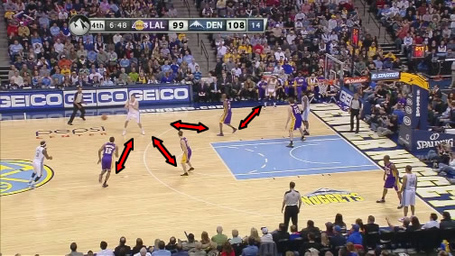 Play #2 is going to take a second look at play #1. Lawson and Gallinari open it the same with a 1/4 pick and roll at the top. 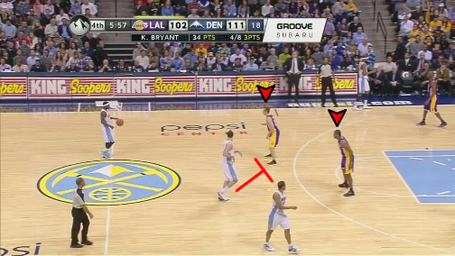 This time Nash goes over the top and MWP doesn't over-commit. Gallinari pops over to the corner again. 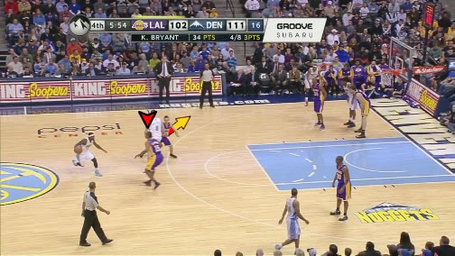 Metta immediately begins rotating over to Gallinari shutting off the open three. However, this now opens up the next problem for the Lakers: Steve Nash trying to stop a point guard from penetrating into the paint. 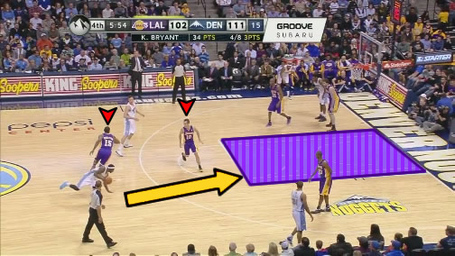 At this point Ty Lawson is like a shark with blood in the water. It's possible that Meeks could have eeked over just a bit more to try and close off the driving lane for Lawson, but it's already too late. Pau Gasol will have to rotate over as a last ditch effort. 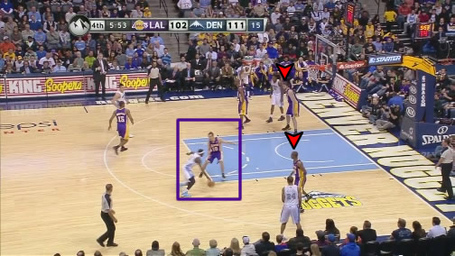 Lawson, however, smartly stays on the other side of the rim and finishes a layup over Nash. 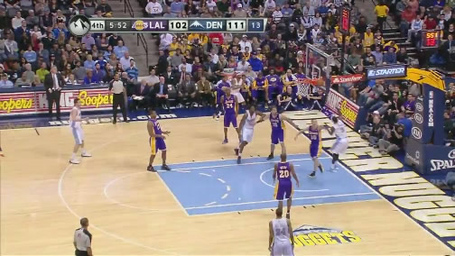 These two plays were both setup to achieve the same goal, and each time provided a different outcome. While the Lakers poor defensive communication and strategy hurt them the first time, their inability to stop point guard penetration in isolation bit them the second time.

Next up we have a pick and roll for Pau Gasol and Kobe Bryant to stop. 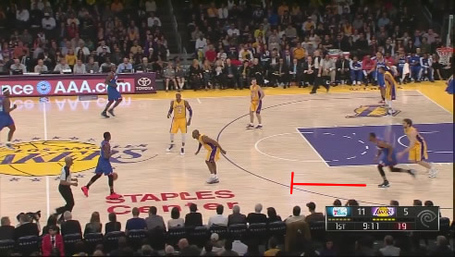 Kobe attempts to go under the screen while Pau hedges to stop Jrue Holiday from driving into freedom. 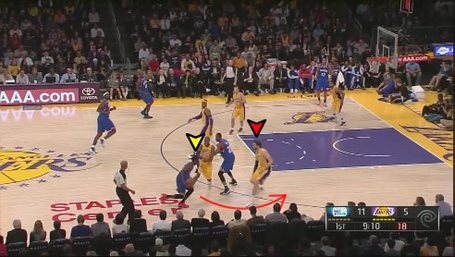 Holiday drives into Gasol regardless while Kobe is still attempting to recover. Darius Morris is aware of this action but should he rotate to help he'd be leaving the Lakers defense in even worse shape. 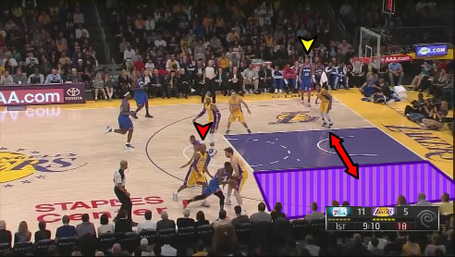 Pau's hedge actually serves as a second screen against Kobe and Jrue Holiday now has a wide open look. Darius Morris starts to move over but isn't in any position to make a play. Also of note, Jason Richardson is completely alone out on the perimeter as the Lakers defense is in complete disarray. Fortunately for the Lakers Holiday misses the wide open shot, but he was able to get where he wanted on the floor. 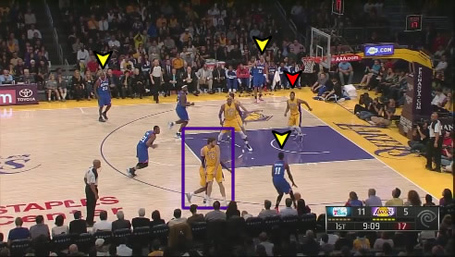 Another pick and roll on the perimeter. Notice Kobe's man beginning his baseline cut here. 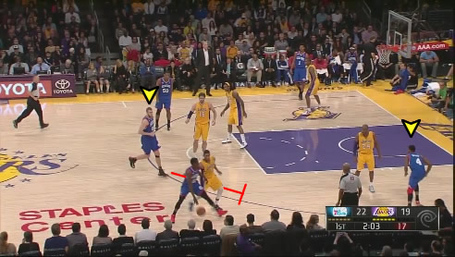 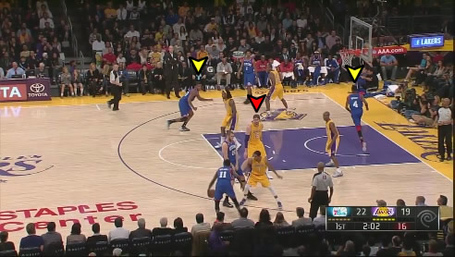 There it is. Darius Morris eating the screen like he hadn't been fed in weeks. Gasol sags off here which gives Jrue three choices. He can take a wide open three, drive in on the laterally challenged big man, or hit Hawes when he rolls towards the high post. It's simple, but pulling Kobe out of the corner gives the 76ers space to operate the pick and roll. Kobe looks perplexed at this point, unsure whether he wants to stay on his man or play free safety. Any guesses? 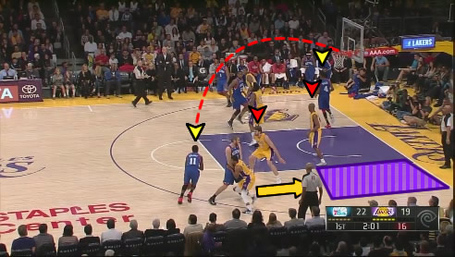 This is where things become murky. Jrue hits Spencer Hawes as he rolls to the basket. Pau Gasol simply isn't going to recover in that small of a window. Jordan Hill is tied up with his man under the basket. That leaves one man to try and stop this play: Kobe Bryant. Kobe decided to play free safety here (shocker) and let his man run off to the corner alone. Now, he's the only Laker who can stop this play. He's not covering anyone while he stands in the middle of the paint, so he has the freedom to rotate and step in front of Hawes. 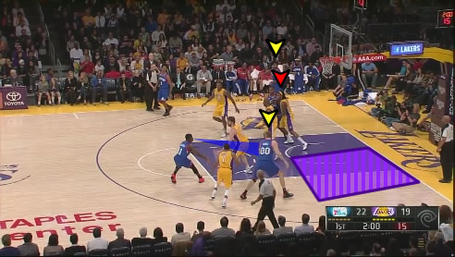 Naturally, Kobe doesn't rotate and actually winds up further from the play than he was initially. Jordan Hill tries to challenge the shot but Hawes makes the layup having nothing to slow him down as he drove in. Two points, Sixers. 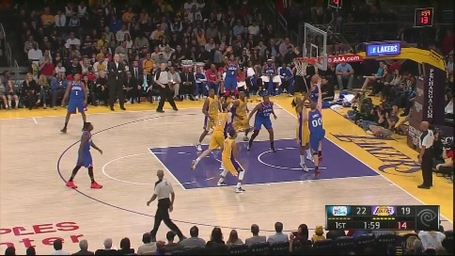 Here, Matt Barnes sets an off ball screen for Blake Griffin. Dwight Howard is in the paint to protect the rim while DeAndre Jordan hangs out along the perimeter. A perfect opportunity for Dwight to paint patrol. 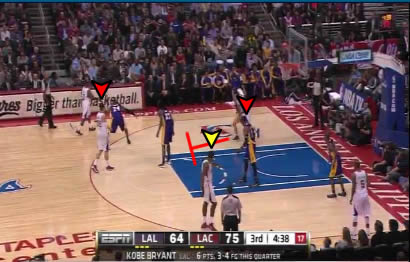 Barnes sets the screen and pops out to the top of the arc. Meanwhile, Dwight is still left to roam the paint. 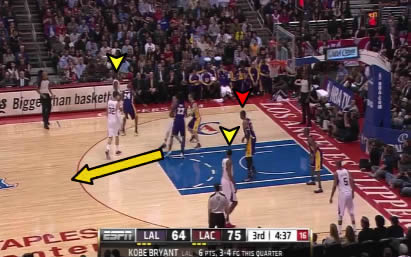 Jordan Hill switches onto Chris Paul and attempts to trap him on the wing with Kobe. Steve Nash is tied to Matt Barnes at the top which leaves Blake Griffin without much obstacle as he begins rolling to the rim. This is where Dwight Howard absolutely needs to be able to move his feet and get in front of Griffin. With DeAndre Jordan so far out of position Howard has the freedom to help. 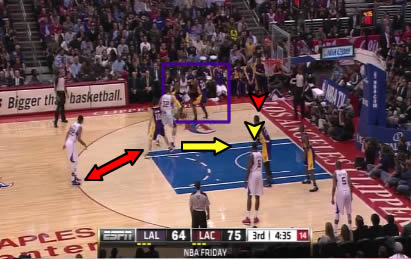 Unfortunately, Howard isn't able to make the play and Blake slams it down for the Clippers. Bingo. 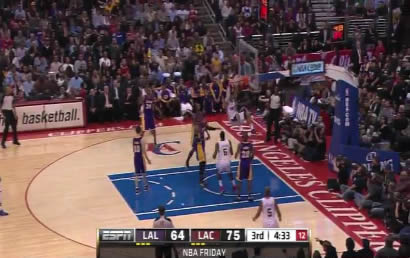 Onwards we go to our last play in this breakdown. Gallinari sets a pick on Steve Nash. 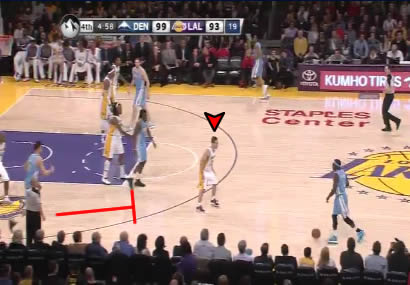 Nash fights to go under the screen and Gallinari is going to pop out to the perimeter. Kobe plays this well and is between the ball and the basket; perfect position to cut him off. Lawson wants to attack the paint here regardless of Kobe. Faried is out on the perimeter and is out of position, so both Kobe and Hill are able to help on this drive. 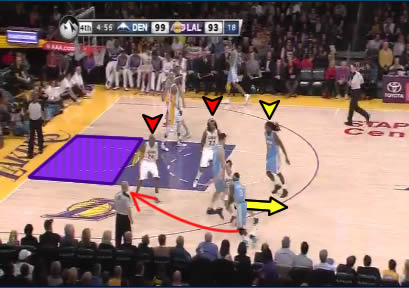 Lawson continues his drive to the rim. Something completely inexplicable happens here, though, as Kobe cuts away from Lawson's path. Hill doesn't help, and Nash is way behind the play. 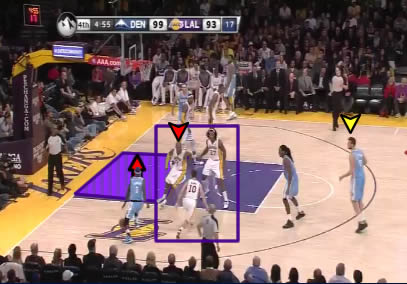 With Kobe rolling out the red carpet for him Ty gets an easy layup. Dwight moves over but is far too late. There's no reason for Kobe to have tried to cut away from being able to stop Lawson. Perhaps he felt he needed to cut back to his man on the perimeter, but Gallinari was out of recovery range. This falls back into the communication and tactics column, as their best option there was to send Nash after Gallinari and have Kobe pick up Lawson. 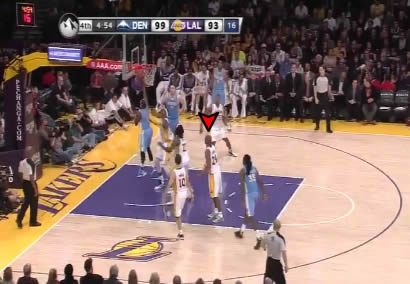 This is just a small sampling of the Lakers defensive problems when it comes to the pick and roll. With a defense as disorganized as the Lakers are, the pick and roll is a lethal weapon for teams to pistol whip the Lakers with. No crisp rotations, no consistent philosophies, and even when they shut off one option it opens up another potential problem (see play #2 with Nash having to try and stop Ty Lawson in isolation). Dwight Howard was brought in to anchor the defense but beyond health, effort, and the remainder of the noise we analyze the Lakers, as a team, are horrible at playing defense together as a unit. Until that changes they will continue to find sustainable success elusive.