The Honeymoon Period With Ramon Sessions Is Over

Share All sharing options for: The Honeymoon Period With Ramon Sessions Is Over

It didn't take long for Ramon Sessions to capture the hearts of Laker fans. In his first start in a Los Angeles uniform Sessions dropped 20 points and dished out 11 dimes against the Portland Trail Blazers, helping the Lakers to a victory despite off nights from Kobe Bryant and Pau Gasol (they combined to shoot 10-for-31 from the field). That was exactly the kind of display that the Lakers had hoped for from Sessions, one where he could step up and be the second option (Andrew Bynum dominated that night) for the team, which is a luxury the team has rarely had over the past few years. Throughout the season's final month and a half, Sessions would only add to the intrigue surrounding him as he became the first Laker point guard to score multiple baskets in the paint in a single game since Derek Fisher uncharacteristically broke free for two transition lay-ups in a 2001 pre-season game while flashing a much improved outside jumpshot, hitting 45% of his threes in March.

But alas, the basketball Gods have some sort of restriction on the Lakers acquiring a sturdy point guard, and all of the problems that we thought Sessions would solve remain. Sessions' deficiencies began to show towards the end of the regular season. A lockout condensed schedule with a few match-ups against teams that were tanking or were flat out awful can do good things for ones overall numbers but when you take a look at his numbers in eight games against active playoff teams, you see a grim reality: 41% shooting, 32 assists to 24 turnovers, only two games with over 15 points (including four single digit outputs). And then there's the whole thing about him making Derek Fisher look like Gary Payton on the defensive end of the floor.

Sessions has been worse in the post-season. Of point guards that have averaged at least 20 minutes per game in the playoffs (excluding Derrick Rose), Sessions ranks 16th in PER. You may or may not know that 16 NBA teams make the playoffs each year. Sessions has a 12.51 PER thru six games, which sits between "scrounging for minutes" and "in the rotation" on John Hollinger's PER scale.

Point guards with similar PERs in the post-season include John Lucas III (Chicago's third string PG), Mike Bibby (New York's third string point guard), Devin Harris and, you guessed it, Steve Blake. Point guards with higher PERs in the post-season include Mario Chalmers, Jameer Nelson, Jeff Teague and, you guessed it, Derek Fisher. Mind you, this is with Sessions being guarded by a league average pick-and-roll and isolation defender in Ty Lawson. In this series, Sessions is shooting just 40% from the field and 24% from deep despite being given just a tad less space than what Metta World Peace usually has when he's open from three.

But the damage doesn't stop there. In addition to being a below average offensive player, Sessions has been a huge negative for the Lakers on the defensive end. Ty Lawson ranks third amongst PGs playing 20 minutes a game this post-season in PER and his back-up, Andre Miller, is not far behind at sixth. Lawson has the advantage on Sessions in every aspect of the game in this series, with a true shooting percentage that is 8% higher than Sessions' as well as a greater assist rate. If you take away game one, Lawson is averaging 20 points on 50% shooting, seven assists and less than a turnover per game. That includes a 32 point, six assist, five rebound performance last night in which Lawson shot 13-of-18 from the field and 5-of-6 from deep.

Of course, Sessions isn't responsible for all of those points, but the disparity in their performances reflects poorly on Sessions. And thanks to Synergy Sports Technology, we can actually look at all of the defensive blunders that were attributed to Sessions. On 25 defensive possessions, Sessions has allowed 31 points on 14-of-24 shooting (58%) with a foul in this series. That includes being abused on the block by everyone from Andre Miller to Timofey Mozgov. And none of those points came on pick-and-roll plays, which gets attributed to the big men. You can say that Pau Gasol and Andrew Bynum are laterally challenged defenders, which is true, but if you look back at Derek Fisher's numbers on pick-and-roll ball handlers, they were usually pretty solid. We all remember how well Fisher fought through screens, from his people's elbow to Luis Scola to chasing around Ray Allen for seven games in the 2010 NBA Finals. That's not there with Sessions, who is constantly getting stuck on screens and confused on how to play his man.

I was skeptical of Sessions' fit with the Lakers from the day they acquired him and even more skeptical of Mike Brown's decision to put him in the starting line-up. Even if Blake is awful himself, at least the one NBA ability he has is put to use when he's on the floor with Kobe, Gasol and Bynum. Los Angeles needs to pound it down low to Gasol and Bynum and the remaining possessions are dictated by Kobe. None of those three guys are huge threats off the ball which means the two players they share the floor with should be of the catch and shoot variety. At this point it's very obvious that Ramon Sessions is not that kind of player. How many times did we see this last night? 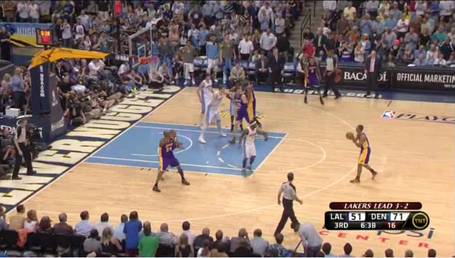 The result was the same every time. Sessions pumpfaked, fooling nobody, and then re-posted Bryant. If you can't make the defense pay for double teaming, you are going to be forced to live and die by hero shots from Kobe or tough inside looks from Bynum. At least Blake or Andrew Goudelock (which is a different story for a different day) would hoist the shot and live with the result.

To be fair to Sessions, now that he's a starter, he's not in a situation that fits him very well at all.

Sessions needs the ball in his hands to be effective, which is common for anyone that plays the point guard position. And even though the Lakers aren't using the triangle offense anymore, they still need a point guard with triangle like qualities - someone that can make post entry passes and hit spot-up shots - at least when playing with their starting unit. The offense may have changed a bit but the three key players and where they operate on the floor hasn't. And for Bryant to isolate or Gasol/Bynum to post-up, they need the basketball, which takes it out of Sessions hands and, essentially, renders him useless.

On top of that, the play that best suits Sessions, the pick-and-roll, is nonfunctional when he is on the floor with the starters. The Lakers ranked 26th in the NBA in production from their roll man this season. Andrew Bynum is not nimble enough to set a high screen and get to the rim quick enough to beat the defense in a Dwight Howard/Amare Stoudemire sort of way and the only player that was involved in more than 100 pick-and-rolls this season that produced fewer points per possession than Pau Gasol was Antawn Jamison.

Of the 120 pick-and-rolls Gasol ran, he only rolled to the basket 33 times (shooting just 48% in these situations). The other 87 times he popped out and shot a jumper (at an average 40% clip, no less). Bynum was only involved in 35 pick-and-rolls this season (3.2% of his offense) and Pau was the ball-handler more often than Sessions was. With two big men that don't force the defense to react whatsoever, Sessions is forced to be a mid-range jumpshooter off the set, and he's shot below the league average from 16-23 feet this season.

There were some positive signs with Sessions when he was free to hog the ball (in a good way) with the second unit before he was promoted to the starting line-up. He seemed to be moving around the floor much more swiftly as the burden of feeding his big men or giving way to Kobe was yet to be on his back and his work with Matt Barnes, whose off-ball skills flourished with the lane open and Sessions handling the basketball, seemed like the kind of stuff that could give a pedestrian second unit an identity. Not to mention that Jordan Hill has now replaced Troy Murphy and/or Josh McRoberts in the rotation.

Hill is much quicker on his feet than Gasol or Bynum and, albeit in a small sample, he posted some great numbers as the roll man with the Rockets this season. I'm sure you can imagine Sessions controlling the second unit with a Sessions/Hill pick-and-roll being the primary action with Barnes free to cut from either wing and a Bynum or Gasol (depending on who is in) post-up being the fallback option. When you can stop (predictably) force feeding your bigs on every possessions and start forcing the defense to make decisions with action like a high pick-and-roll, everybody becomes better. Bynum isn't doubled team on every possession, Hill isn't forced to be just an offensive rebounder, Barnes can stop staying stagnant on the wing and Sessions can finally have a chance to attack the paint off the pick-and-roll, which is exactly how the Nuggets have killed the Lakers in this series on the other end.

Sessions is most likely a lost cause defensively, but he can be salvaged offensively with a shift to the second unit. Unfortunately, Mike Brown has proven to be a sloth when it comes to making simple adjustments on defensive coverages, so a change in his starting line-up at this point would be far fetched. So unless Brown has a change of heart or Sessions starts knocking down a decent amount of the wide open three-point looks he's been getting, he'll continue to be badly outplayed in the post-season. Even if the Lakers can overcome the Nuggets this weekend, Sessions will face an even tougher challenge in Russell Westbrook in round two. And Los Angeles will not be able to survive that mismatch.