Lakers Offense: Meet Ramon Sessions and the Pick and Roll

Share All sharing options for: Lakers Offense: Meet Ramon Sessions and the Pick and Roll

The pick-and-roll (P&R) is a very simple play and is the staple of most offenses in the league. The Lakers, however, aren't like most teams. They have not been a P&R team by any stretch of the imagination. This has been partly due to the long-time use of the triangle offense, which created shots via various cuts and screens, and partly due to a lack of personnel with the skills to execute such a play. The required skill set of the ball handler is three simple qualities:

Andrew Goudelock can shoot and drive (finishing with a floater), but isn't a capable passer which is why he is better as a shooting guard; Darius Morris can pass and has the athleticism to get to the rim but can't shoot; Steve Blake can pass but is not a great shooter off the dribble and has almost no ability to get to the rim. and former Laker Derek Fisher unfortunately could not do any of the three effectively. The Lakers have only one player who possesses all three skills: Kobe Bryant. It almost sounds like a cruel joke.
Question: Who is your team's best point guard?
Answer: Our shooting guard
That all changed yesterday when Mitch "The Magician" Kupchak, who turned Kwame Brown into Pau Gasol, duplicated that feat by transforming Luke Walton (and a draft pick) into a true point guard. Lakers fans, meet Ramon Sessions. Lakers offense, meet the Pick-and-Roll.

The Lakers don't utilize the P&R much currently, and with good reason. They aren't good at it. Here is a chart showing a breakout of the four main types of half court sets the Lakers run along with the points per play that each type generates. 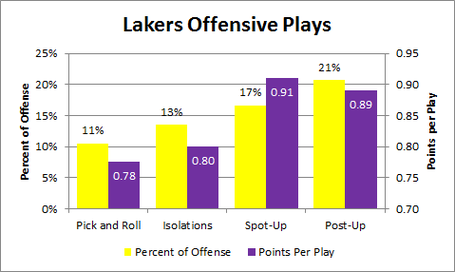 There are three interesting observations from the chart.

The first item should be no surprise. The Lakers possess arguably the three best post players at their respective positions in Bryant, Gasol, and Bynum. It would make sense that this is the most used offensive play. The Lakers are also quite efficient at it, ranking 5th in points-per-play on these attempts.
The second and third items are what's interesting. The Lakers use more isolations than P&R plays even though P&R plays are expected to produce 10% more points per possession than isolation plays for the league. The Lakers may have been wise to go against the grain here though because they are so bad at P&Rs that it makes sense to use the most inefficient play in basketball, the isolation. Just how bad are they at the P&R? They rank 25th in the league in P&R efficiency, even with Kobe doing most of the ball handling. One problem with the Kobe Bryant P&R is that his turnover rate is twice as high on these plays relative to other types of offensive plays.
This is where Ramon Sessions will improve the Lakers' offense. His turnover rate on P&Rs is 25% lower than Kobe Bryant's. Furthermore, when comparing him to Blake and Fisher, he is more efficient on P&R, isolation, and spot-up jump shots. He basically does everything that they do but much better. By having a true P&R point guard, the Lakers can shift away from inefficient isolations to much more efficient sets.
The consensus view is that Ramon Sessions' passing ability will aid Bynum the most as he can set him up for easy baskets all the time. While Sessions' arrival is sure to provide increased opportunities for Bynum, the biggest beneficiary will be none other than Kobe Bryant.
Here is a similar chart as above but with Bryant's statistics: 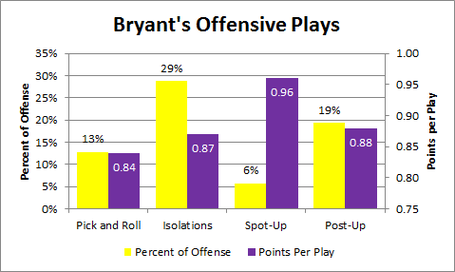 Kobe's post-up and isolation plays produce similar points per play, but his most inefficient play is P&R. Kobe's 0.84 points per play in the P&R is better than the Lakers' team average of 0.78 (because Blake is poor and Fisher was downright awful), but a 0.84 would be one of the worst offenses in the league if ran every time down the floor. Kobe's most efficient offensive play is as a spot-up shooter. Unfortunately he doesn't get many attempts because, until now, no one could create them for him. Sessions can.
One play the Lakers have had success with recently is the P&R between Kobe and Gasol with Bynum staying near the rim should his man rotate to Gasol. This play can be run just as effectively, if not more, between Sessions and Gasol. The best part is that Kobe can spot-up on the wing. If his man leaves him to rotate and help, Kobe will be given plenty of wide open jump shots. The biggest question is whether or not he can hit them as, if I recall correctly, he hasn't had a wide open jump shot since 2002.
The acquisition of Sessions can't be understated. This Lakers team has shown the ability to be an elite defense but has struggled to click offensively. A big reason for the struggle has been forcing Kobe to play as a quasi-point guard setting up the offense. This has resulted in the Lakers using more isolations than P&R as Kobe is not a great P&R player and is turnover prone. The Lakers were essentially trying to maximize the output of inefficient isolations because they were marginally better than P&Rs. Now with Sessions on board, the Lakers can shift to more efficient P&Rs, move Kobe back to his more natural pure shooting guard role, all while reducing turnovers by utilizing a better ball-handler. Lakers nation, we finally have the point guard to run the offense properly. Let's welcome Ramon Sessions and welcome the play known as the Pick-and-Roll to our team's repertoire.