When Mike Brown took the position as the new head coach of the Los Angeles Lakers, he knew full well what this team possessed in both strengths and weaknesses. His three stars in Kobe Bryant, Pau Gasol, and Andrew Bynum have enough size and talent to contend with any other team's best roster. But talent doesn't always guarantee wins. If it did then LeBron James wouldn't have the same number of championship rings as yours truly. Oftentimes match-ups can mean just as much, if not more, than pure ability on paper.

The ten players on the court don't operate in a vacuum but instead have interactions that bring out the best and worst in each other. Mavericks owner Mark Cuban uses statistical analysis to determine which combinations of players have the biggest positive and negative impacts on his team's performance, and it helped the Mavs win a title when no one else gave them a chance. Coach Brown is a stats guy too, at least according to Metta World Peace. He has spent the beginning of this shortened season trying every combination of players to identify what works and what doesn't. How many combinations has he tried? Only 163 different line-ups have been on the court for the Lakers this season. There are many different combinations of pieces that Brown can put on the floor, and as the minutes begin to accumulate, we are starting to put a few of the pieces together.

The Lakers are a top heavy team, having a dominant trio of stars before the talent level falls off precipitously. One of the major decisions facing coach Brown is how to provide all three stars a few minutes of rest without digging too deep a hole to climb out of. Below is a graph showing various combinations of Bryant, Gasol, and Bynum along with their offensive and defensive ratings (the minutes each combination has played is displayed on the bottom for those curious about sample size). If the purple columns are taller than the corresponding yellow columns then this combination outscores the opposition. 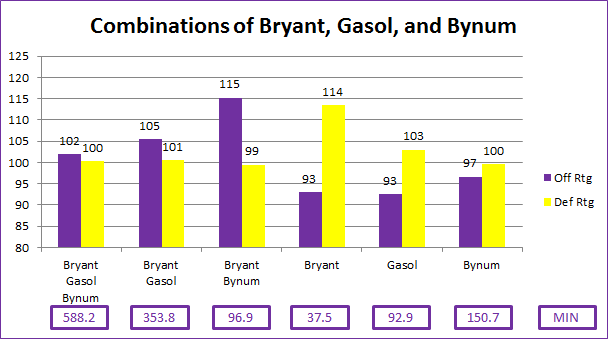 A few observations immediately jump out. The first is that the Lakers are outscored anytime two of the big three sit. When both Gasol and Bynum sit the Lakers lose all their inside advantage and as good as Kobe is, he can't beat teams by himself. The Troy Murphy-Josh McRoberts front line is a disaster waiting to happen. Between Gasol and Bynum though, the Lakers fair better with Bynum anchoring the team by himself than they do with Gasol manning the pivot.

The second is that either combination of Kobe and another big man actually outperforms the trio of stars. The difference between the two-man combinations and the three-man combinations is almost entirely due to better offensive production. The reason could be the level of opposition as the trio almost always faces a team's starters where as the two-man combinations may face off against some bench players. Another reason is that all three players prefer to operate in the post and there just isn't enough room for all of them. Once one of the big men is substituted out for one of the back-up power forwards it creates more space to operate and thus the offense improves. This was true last year as well when any combination of Odom and one big man outperformed the pairing of Gasol and Bynum. Of the two-man combinations, the duo of Kobe and Bynum has been the more dominant duo, not the pairing of Kobe and Gasol. (The combination of both Bynum and Gasol without Kobe has played fewer than 5 minutes and thus not shown in the chart.)

It is well known that the Lakers possess arguably the worst point guard and small forward rotations in the league. Mike Brown has tested out various combinations of the two point guards and two small forwards looking for the winning formula. 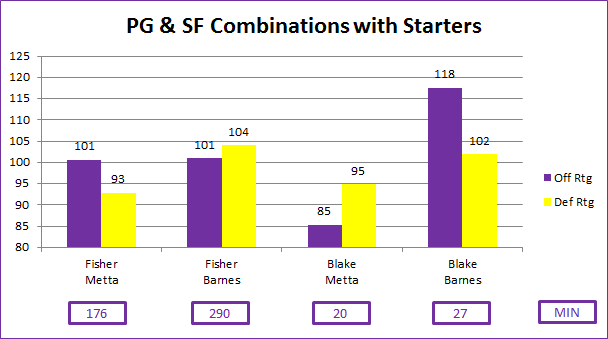 The point guard and small forward combinations are a perfect example of how two plus two doesn't always equal four in the NBA. When comparing Metta World Peace and Matt Barnes with Fisher running the point, the team is much better with World Peace. But comparing the prior players when Blake is running the point yields the opposite result. The defensive impact of World Peace is evident as the team performs much better with him defensively than with Barnes. Offensively, when playing Fisher the players generally produce similar ratings. This is most likely due to both assuming roles as stand still shooters in the corner, which both are equally poor at doing.

When Blake is the point guard things change. Blake is far and away the better point guard to find a cutter on the move. When Blake plays with Barnes, he has a player who is excellent at finding creases and cutting and Blake has the ability to find him on the move. This may be the reason that the offense performs better when Blake and Barnes are together. This could all just be small sample size as the Blake combinations only have 20 and 27 minutes between them respectively. Only time will tell if the results hold, but for now Mike Brown may be best served to play these four guys as pairs to complement their collective strengths.

The Lakers have two new power forwards to replace what Lamar Odom provided in prior years. These two forwards are very different in skill set. Troy Murphy is a stretch four who can rebound solidly. Josh McRoberts is a young athletic player whose game is built on passion and hustle more than anything. The question is who should be playing more backing up the Lakers front line. 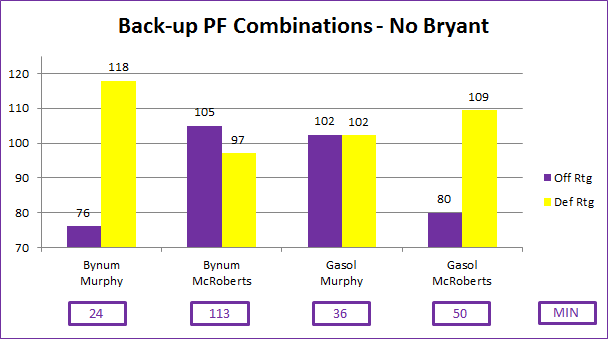 This chart shows the combinations of back-up power forwards with a starting big man (with Kobe on the bench). These line-ups haven't played a ton of minutes (outside of the Bynum-McRoberts combination) so a word of caution must be issued; however the results are interesting nonetheless. It appears that McRoberts plays much better with Bynum than he does with Gasol. Meanwhile Murphy is the opposite, playing better with Gasol than with Bynum. This is key because one of the findings from the first chart was that when only one of the Lakers stars is on the floor, the Lakers have been outscored. However, here we have discovered a front line that bucks that trend. The combination of Bynum and McRoberts (with Kobe and Gasol on the bench) has outscored the opposition. Meanwhile the combination of Gasol and Murphy (with Kobe and Bynum on the bench) has at least put up a draw. If Mike Brown is going to rest Kobe and another big man, he may be best served to focus on these player combinations. Mixing the combinations up, such as Bynum and Murphy or Gasol and McRoberts, produced two line-ups that were absolutely crushed by the opposition. 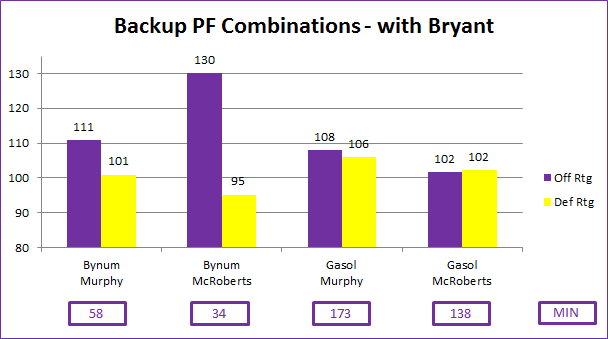 Throwing Bryant into the combination yields more interesting results. First off, the offensive rating of each duo increases; second, three of the four outscore the opposition while the 4th essentially fights to draw; third, Bynum still plays better with McRoberts than Murphy, while Gasol plays the same with either player. Putting this chart together with the previous chart further suggests that Brown should focus on playing McRoberts when Gasol is out, and playing Murphy while Bynum is resting.

What to do with Goudelock

The Lakers' 2nd round draft pick, Andrew Goudelock, has been a pleasant surprise. The Lakers knew he could shoot, but his ability to handle the rock, finish in the paint with a running floater, and decent effort on the defensive end has led to increased minutes. The big question isn't how many minutes he should get, but whether he is better as a point guard or a shooting guard. 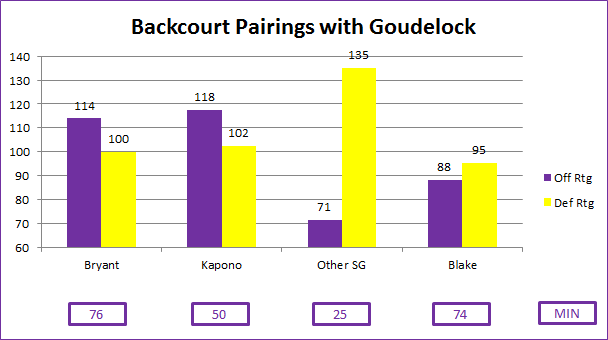 The chart shows he has clearly been better for the Lakers at the point guard position. When paired with Kobe or Kapono, two players that require defensive attention, the Lakers have done very well with Goudelock handling the ball. In the limited minutes where Ebanks or Barnes played the shooting guard role, the results were disastrous.

Goudelock has played a little shooting guard with Blake running the point. The Lakers haven't done well with this line-up. In fact, the Lakers haven't done well with any combination of two point guards. If Brown wants to run a smaller line-up to spread the floor, he may be better served with trying a line-up of Goudelock, Kapono, and Bryant, a line-up that has only played 4 minutes together.

The Lakers are a team with top end talent and not much beyond that. Unless Mitch Kupchak pulls off a move before the deadline, the current roster is what the Lakers will be taking into the playoffs. If that is the case it will be paramount for Mike Brown to get the maximum results from this limited cast. He may have to find a way to make two plus two equal five. At least the Lakers are starting to show just which combinations may add up to more than just the sum of their parts.