Time to move on for the Lakers, who will try to piece together a win after blowing a nearly 20 point lead to the Houston Rockets. Now, they face the stretch four Ryan Anderson and the New Orleans Hornets.

After blowing a 17 point lead to the Houston Rockets, the Lakers continue their three game road trip with a game against the New Orleans Hornets. Anthony Davis and Eric Gordon are both out indefinitely for the Hornets, so it appears that there is another one of those "winnable" games on the table for the Lakers to tack onto their record. The chase for .500 is still on for the purple and gold.

With Pau Gasol resting his knees the Lakers will continue to give Antawn Jamison the starting minutes at the 4 slot. Starting for Gasol last night, Jamison scored 15 points, grabbed 9 boards, and was 3-4 from deep. All respectable from the veteran Tar Heel. He will be matched up against Ryan Anderson, perhaps the best pure stretch power forward playing in the league right now (and by stretch I'm talking about beyond the arc, not just mid-range), and the alleged #1 target on the Lakers wishlist.

Wishlist. As in, you wish. Why do the Lakers have the former Orlando Magic player pinging so fiercely on their radar? Well, that's obvious, he's shooting 42.3% from deep. To further exemplify just how well Anderson has been shooting the ball, I present to you Exhibit A. 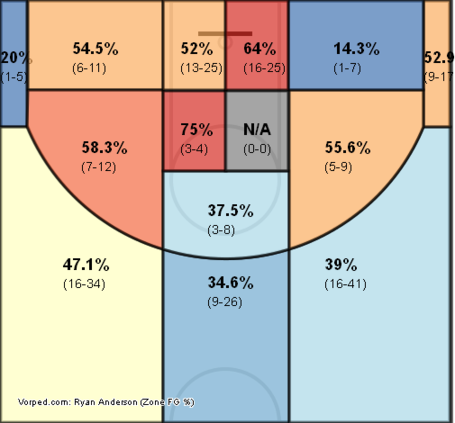 No further explanation necessary. Beyond Anderson, though, the Hornets lack any scoring punch. Their other rookie, Austin Rivers, is having the introductory season from Hell. 6.9 points per game on 29% shooting? Bad, bad, bad. Greivis Vasquez has been playing solid ball for the future Pelicans, however, with 11 points per contest and 8.7 assists.

As you can see, it's a reach to find bright spots on this roster, but the Lakers have become experts at helping teams find light in the darkest of tunnels. Both Toney Douglas and Greg Smith of the Houston Rockets were averaging 5.something points per game and wound up over 20 each, giving the Rockets enough juice to swing back at the Lakers and pry a victory out of their fragile little hands.

Can the Hornets find a hero in Austin Rivers, son of Doc Rivers? Will Xavier Henry have a career game, taking advantage of a Lakers defense that refuses to rotate properly and communicate? How about Robin Lopez? Is he going to abuse the poor help defense of the Lakers and drop 30 on Dwight? Seriously, these are questions to be asked with the inconsistent and poor play of the Lakers over the first 18 games of the season.

After sitting Jodie Meeks through the majority of the loss Sunday to Orlando, Mike D'Antoni returned to the small lineup featuring Kobe at the small forward in order to unleash the Meeks. Unfortunately Jodie returned the favor by going 1-5 from long range, but nonetheless remains a player that needs to establish himself in a system that thirsts for shooters like Dwight Howard thirsts for a good game of Call of Duty.

Jordan Hill played well in the 14 minutes Mike D'Antoni allowed him out on the floor, chipping in 9 points and 9 rebounds. It appears his vision of Hill is utilizing him only as a backup center, which isn't surprising. Hill's inability to spread the floor will leave D'Antoni hesitant to play him as a power forward, even if he is perhaps the best pick and roll defender this side of Dwight Howard on the roster. As D'Antoni continues to turn stones and try new combinations of players, perhaps he'll uncover a few lineups that he finds to be effective. Or, perhaps we'll continue to seen an out of sync offense relying on 31 field goals from Kobe Bryant as he closes in on his 30,000th career point.

This is a game for the Lakers to lose. Unfortunately, we just watched them lose back to back games that were in the same vein. However, it's difficult to envision a path for the Hornets to come out victorious. They have one elite scorer who can't create for himself and no defenders under a 105 defensive rating active for tonight's game. The Lakers should be able to score in any number of ways, which really doesn't mean all that much as we've learned. Quality opponent or not, it'd be nice to watch the Lakers breeze through another easy one. Please?

- What are the opponents saying about the wonderful 8-10 Lakers after blowing that Rockets game? Check At The Hive for the New Orleans perspective.