The Lakers travel up the coast to face the Golden State Warriors in their second meeting of the season. Steve Nash is still considered a game-time decision.

It's been an eternity in basketball regular season terms since the Los Angeles Lakers have played. Their last game was Tuesday evening in a victory over the Charlotte Bobcats that they were a missed wide-open layup away from dropping. Pau Gasol made his return to the Lakers and played well, though was kept on the bench in the closing minutes. Since then, Steve Nash has made considerable progress and is now "for sure" playing on Christmas against the New York Knicks and is considered a game time decision tonight against the Golden State Warriors.

Aside from getting Pau Gasol up to speed, another new fold into the Lakers' game plan is starting Kobe Bryant at small forward and Jodie Meeks as the starting shooting guard. Mike D'Antoni has also stated that his usage of either Devin Ebanks or Jodie Meeks as the starting two-guard will be dependent on match-ups, as will Kobe Bryant starting at small forward. This pushes Metta World Peace to the bench, where he will be playing backup minutes at both power forward and small forward and becomes the Lakers sixth man. Having Metta as the backup four will help D'Antoni work Pau Gasol's minutes directly behind Dwight's, and overall this change helps him mix and match lineups as the game dictates.

The changes continue to hit the Lakers this season, and the Lakers continue to play an inconsistent brand of basketball.The Golden State Warriors, however, have emerged out of the first quarter of the season as frontrunners in the Western Conference. They're currently in 5th place in the West, just 3.5 games back from the conference leading Oklahoma City Thunder. In the month of December they are 9-3, and David Lee is now the only player in the league averaging 20 points and 10 rebounds. Lee has scored 20+ in the last 11 games, and the Warriors as a whole have been playing a strong game of basketball over the last 10 games. In that frame, David Lee is averaging 24.3 points per game and 12.1 rebounds per game on 61.8% shooting. Oft injured Stephen Curry is having a great season as well, and in the last ten is averaging 22.3 points per game, 6.3 assists per game, and shooting 48.1% from deep. Overall, the Warriors are a dangerous team offensively and can do their damage from just about anywhere on the court, as shown in the below shot chart. 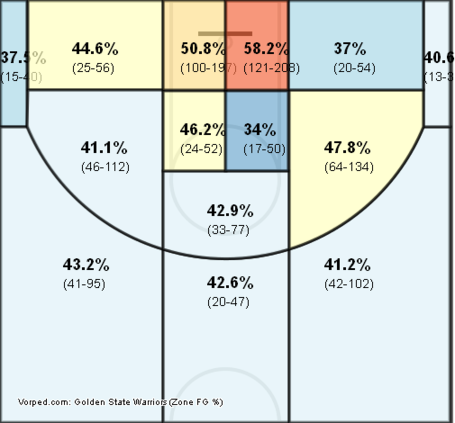 When the two teams met earlier in the season it was the first post-Mike Brown game for the Lakers. L.A. was victorious in the 101-77 contest, with the Warriors missing just about everything from the outside. A 7-25 night from deep is certainly an outlier of an night for the fifth highest three-point shooting percentage team in the league (37.5%). The Lakers have made up ground in that department as well since the first meeting, a night in which they shot 28.6% from deep. The Lakers are now 7th in the league, up to 37.2%. With the Lakers questionable defensive schemes and communication, the Warriors will undoubtedly get plenty of open looks from downtown. With Stephen Curry (44.2%), Jarrett Jack (41.5%), and Klay Thompson (37.4%) as long-range threats, making proper decisions on the defensive side of the ball will be crucial.

Without their franchise center in Andrew Bogut, the Warriors are still an incomplete picture of what they want to be as a team. Just as the Lakers are incomplete without the catalyst for Mike D'Antoni's system in Steve Nash. On a three-game winning streak, this is a game the Lakers should certainly seize, especially after having time to practice, refine, and rehab since Tuesday. Whether or not Nash plays, this is a game the Lakers need to step up and win. A good ole' cross state Cali' battle on the slate tonight.

- Give our California brethren, Golden State of Mind, a look.