Pau Gasol is expected to make his return for the Lakers as the Bobcats visit Staples Center. Can the Lakers three-peat single game victories?

The Los Angeles Lakers return to Staples after a road trip in which they went 2-2 with plenty of optimism to be had. Riding an electrifying two game winning streak (count 'em, two), they face the Charlotte Bobcats Tuesday night. Yes, the Bobcats, who seem to give the Lakers fits for whatever forsaken reason. The two franchises have faced off 15 times, and the Bobcats are leading the all-time series at 8-7. The Bobcats, everybody. Tonight could be the night the Lakers finally even the score, though.

The 'Cats, currently, are on an 11 game losing streak. Their last win came November 24th against the... wait for it... Washington Wizards. The Bobcats are giving up 103.9 points per game, the absolute floor of the league. Pulling your hair out over the Lakers lackluster defense? A defensive rating of 110.3 per 100 possessions would be enough to turn Andrew Bynum into Don King over an 82 game season. They don't have a single player in rotation that has a defensive rating better than 107.

This isn't a team the Lakers should struggle with. Will they? Up and down, Jekyll and Hyde, cats and dogs; this team is a different animal and the same beast more often than not so there's no telling what purple and gold squad will show up Tuesday evening. The Bobcats have precisely what the Lakers lack: youth and athleticism around the perimeter. They are led by sophomore player Kemba Walker (18.1 ppg, 42.8% fg, 6.1 apg). He has certainly improved in his 2nd year in the league, and I'll leave it to Rufus on Fire's Ben Swanson to give a synopsis of what Kemba is doing with Charlotte to start the season.

He has scored in double digits in every game but one: the abomination of an outlier that was the Oklahoma City game. In 23 games this season, Walker has shot below 40 percent in just seven. It's been a stunning turnaround from the previous year, when Walker could show up with an impressive scoring night or an underwhelming night when next to nothing fell through the hoop. - Ben Swanson, Rufus on Fire

The Bobcats second leading scoring is coming off the bench and goes by the name of Ramon Sessions. In 26.7 minute per game Sessions is averaging 14.4 points per game and 4.1 assists. When Ramon left the Lakers he was averaging 12.7 points per game and 6.2 assists in 30.5 minutes per game. That abnormally high three point percentage most raised their eyebrows at and considered an outlier for a historically below average shooter? Yeah, Sessions returned to his poor three point shooting ways, now a 27.3% shooter from deep. Back to Earth Ramon plummeted, though you could say he did just that in the playoffs. Regardless, his $10 million over two years deal as a backup point guard with Charlotte certainly looks good considering the Lakers are paying Chris Duhon and Steve Blake $15.6 million over that same period.

Another Bobcat to keep an eye on is Ben Gordon who from beyond the arc is shooting at a 43.9% clip. While the Lakers came out with the victory in Philly, they also gave up multiple wide open looks from the corner that, luckily for them, didn't go in. With the defensive rotations still being a problem Ben Gordon will likely be able to tiptoe his way to the corner for a handful of open threes as well. In fact, while the Bobcats have struggled to shoot from deep, they're shooting 43% from both corners. 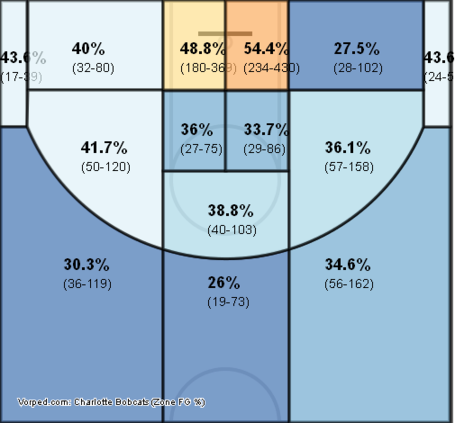 All this aside, most important in this game is the expected return of Pau Gasol. Having missed time since December 2nd as he treated tendinitis in both of his knees he is "expected" to make his return. The Lakers have been starting DEVIN EBANKS at power forward. Yes, this is a step forward. The Lakers just swapped out starting Ebanks for Pau Gasol, for absolutely nothing. Keep an eye on his minutes, and where he finds himself in the offense. His ability to facilitate and operate around the elbow will be a welcome addition to an offense that has been living by perimeter shooting.

The light at the end of the tunnel is quickly approaching for the Lakers. With Pau Gasol's return, and Steve Nash being hopeful to return by Christmas, and even possibly as soon as the Lakers' next game (!) Saturday against the Golden State Warriors, it may be time for the Lakers to start switching gears and getting their act together.

The Seatbelts - Cats on Mars

- Rufus on Fire is looking forward to Pau Gasol's return "mostly so Byron Mullens can dunk on him". Check the slander they're slinging over there.