Lakers Come for Jazz, Brown Gives us the Blues

The Lakers came into Utah looking to string together the first winning streak of the new Dwight Howard era. Unfortunately, lack of energy and questionable rotations results in another Lakers loss.

Share All sharing options for: Lakers Come for Jazz, Brown Gives us the Blues

The Lakers squared off against the Jazz for the first time in the regular season last night and just like their two pre-season scrimmages, the Jazz walked off the court the victors. In a building named Energy Solutions Arena, the Lakers brought little energy. The combination of less than enthusiastic play, cold shooting, and questionable rotations put the Lakers behind the proverbial eight-ball all night long as the purple and gold squad never led in the game. After seemingly finding some offensive and defensive cohesion against the Pistons, the Lakers took a major step back tonight and there is plenty of blame to go around.

Drew Garrison hit the nail on the head when he wrote:

If not for the Jazz's own struggles shooting the ball, the game could have been a 20-point blowout. Only one Jazz player made a three-point field goal and the Lakers had a 28 free throw advantage and still lost by almost double digits. The Lakers performance was much worse than the final score indicated.

The only two bright spots were Kobe Bryant and Dwight Howard. The Lakers' two biggest stars continued their solid production despite being less than 100% healthy. Howard's lack of explosion did not prevent him from having a solid night of 19 points and 9 rebounds on an efficient 7 of 11 shooting. Bryant struggled somewhat with his shot, finishing 7 of 17, but made up for it with aggressive play that got him to the line 17 times where he finished with 29 points. It is evident that his foot is not fully healed but the will to win is always present in the Black Mamba. While Howard's and Bryant's scoring was solid, they did combine for 11 turnovers which hurt the Lakers' cause. Outside of Howard and Bryant though, the results were much more bleak.

Metta World Peace shot 3 for 12 and was one of the more productive players of the night (yes it was that bad). Pau Gasol and Steve Blake each made only two field goals on nine and ten attempts respectively. As for the bench, not one player made more than one field goal. Tonight's game was, in a nutshell, reflective of the first four games of the season. The Lakers have basically devolved into a Bryant-Howard duo that is the most dominant pair of teammates in the league, followed by a bunch of poor saps that can't seem to get their games going. 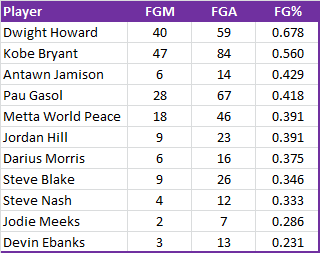 The table above shows the field goal percentage for each Laker on the season. Howard and Bryant are scoring very efficiently at nearly 50 points per game combined. The rest of the squad is shooting worse than 43%. Pau Gasol's struggles have not been called out because of his great start in the season opener and the Lakers winning against Detroit but he is averaging less than 14 points per game with poor efficiency and no injury to which we can assign the blame. His five points and seven rebounds game last night is inexcusable.

The anemic bench production continues. With Steve Nash on the sideline, Steve Blake is now playing the role of starting point guard and while he did very well against the Pistons, last night his stroke abandoned him and so too did his confidence. After a night filled with shots from deep clanging off the rim, Blake became hesitant and late in the 4th quarter even passed up an open three to move the ball to Gasol to take the three instead. I am no basketball expert but I am pretty sure it isn't a good play for the career 39% three-point shooter to pass up an open attempt so that the career 24% three-point shooter can take it.

Speaking of not being an expert, Mike Brown I have some reading material for you: 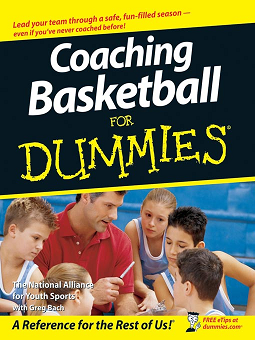 I hate to bash Mike Brown as he is the coach of our team, and the Lakers organization has just reaffirmed their faith in the man, but seriously what was he thinking? At the end of the first quarter he trotted out a line-up of Darius Morris, Devin Ebanks, Antawn Jamison, Jordan Hill, and Pau Gasol. A passive Pau Gasol paired with no great floor-spacing shooter or shot-creating playmaker, what could go wrong? That line-up closed out the final two and half minutes and produce not a single point. Zero. Zilch. Nada. Goose Egg.

Surely Mike Brown would have recognized the flaws in that line-up, right? Not quite. He started the next quarter with a similar line-up, but with Metta World Peace now manning the shooting guard position and Howard anchoring the middle. It shouldn't come as a surprise that this line-up played a couple minutes and was outscored 10-4. Playing these two line-ups to end the first quarter and start the second quarter caused the Jazz' four-point lead to balloon to fourteen points. The Lakers would never recover from that run.

The famous saying is, "Fool me once, shame on you. Fool me twice, shame on me." But what happens if you are fooled three times? Mike Brown was twice hurt by these four non-shooters plus one all-star big man line-ups. Certainly the man wouldn't do it again in the same game would he? Well, yes he did. Brown sent the same line-up that started the 2nd quarter back out on the court to start the 4th. The Jazz extended their lead another three points during that span. For those of you who are counting, those line-ups were a combined -13 while the other line-ups were a +4.

One of the reasons those line-ups failed so miserably is because there was no spacing due to a lack of shooters on the floor. This is where Mike Brown's other most puzzling move came in: Jodie Meeks, DNP - Coaches Decision. Meeks is the only true back-up shooting guard on the roster, has a solid three-point stroke, and has shown some defensive chops. Mike Brown never let him leave the bench and instead chose to play MWP as the back-up shooting guard. If anyone has any idea for why he would choose this, please let me know because no matter how I look at it, I can't find any justifiable reason for such a decision.

Credit has to be given to the Jazz as they certainly put in work and deserved to win, but one can't help but feel disappointed given the self inflicted wounds that led to this loss. The Lakers are a team that is quickly sinking in what is a very deep conference. Their two best players are trying to rehab while playing, while their third best player is on the sideline in street clothes. There simply isn't much room for the Lakers to make mistakes and still win games right now, especially when those mistakes are coming from the head of the bench.