The Nuggets head down to Los Angeles to face the Lakers for some Friday night basketball in a match-up featuring two teams struggling to adjust to new ice cream sundae toppings.

It's been three days since the Los Angeles Lakers had their feathers plucked by the Indiana Pacers and George Hill, but the purple and gold is back at it again tonight with a home game against the Denver Nuggets, partners in the crime of kidnapping Dwight Howard out of Orlando. Their payoff in this heist? Andre Iguodala.

The last time these teams played was game 7 in the Western Conference, where the Lakers were pushed to the brink of elimination by a team without a "superstar" talent. An up and coming Western Conference force guided by George Karl. Their depth and youth kept pushed the Lakers to the edge with Ty Lawson eviscerating Ramon Sesssions on both ends of the floor. Things have certainly changed since the Lakers eventually prevailed in the first round match-up.

So, now, the two teams which have both been struggling to adjust to the new toppings on their ice cream sundaes will meet in a clash of rainbow sprinkles and crushed Oreos. Denver shipped off Arron Afflalo and Al Harrington in order to bring in a centerpiece in Andre Iguodala, which couldn't possibly be more ironic considering that's exactly why the Philadelphia 76ers were ready to go in a different direction-- he isn't the kind of player who will carry a team to the promised lands. Stocked with depth, and touting perhaps the most non-superstar "elite" talent in the league, Andre Iguodala, Denver lacks an identity; an issue they've faced since the Carmelo Anthony trade. Still, the Nuggets have the personnel that the Lakers could only dream of; youth, players who can get up and down the court, and depth on depth on depth. Iguodala is a premium wing defender that will surely be matched up against Kobe Bryant all night, and when he goes to the bench? George Karl can send Danilo Gallinari at Kobe, who has always done a great job of playing pestering defense when assigned to him.

The Nuggets have six players averaging double figures (two of which come off of the bench), they lead the league in rebounding, they're third in blocks, yet have seemed to have been unable to find a winning formula, sitting at .500 (8-8). Being 24th in the league in three point shooting jumps out looking over their numbers (we know a thing or two about the problems being unable to shoot the ball cause). Danilo Gallinari has started the season shooting the ball about as poorly as possible, making only 25.6% of his 5.5 attempts from deep per game. Ty Lawson joins him in the below 30% club, making 26.8% of his attempts from deep. In fact, looking over their shot chart, the Nuggets only shoot over 40% in one zone from the perimeter. Yikes. 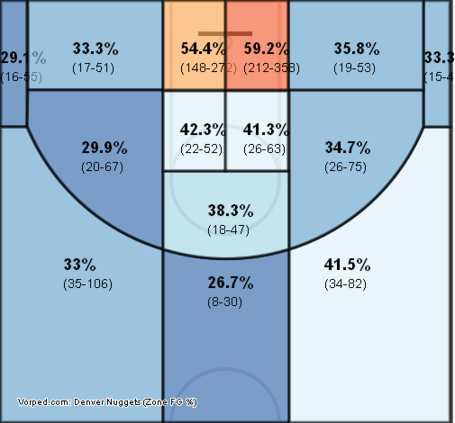 The Nuggets strength is around the rim though, as they take an incredible amount of their field goal attempts in the restricted area. Also, they are the top ranked offensive rebounding team in the NBA, as both Javale McGee and Kenneth Faried (aka Manimal) average 5 or more offensive boards per game. The Lakers just came off of playing another great rebounding team in the Indiana Pacers and did a great job in controlling the boards, with Kobe Bryant chipping in 10 boards of his own while he also put in 40 points. Oh, and 10 turnovers, which absolutely cannot happen against a Nuggets team that can run harder than just about any team in the league. However, the Nuggets are also in the bottom of the league in turnovers committed, so this very well could be the battle of who's going to throw away possessions.

Not only do both teams struggle in the turnover department, the Nuggets and Lakers are 29th and 30th in the league, respectively, in free throw shooting percentage. Interesting, both teams are struggling, can't make their free throws, and turn the ball over with reckless abandon. Is that a pattern for failure I see?

Darius Morris must step up to the plate in yet another test of the rookie's defensive capabilities. Lawson has struggled to start the season, shooting only 41% from the field, and is abysmal from beyond the arc. However, his strength is in his speed and ability to get to the rim. Point guards built like Ty Lawson are exactly why it's incredibly important to have a defensive anchor like Dwight Howard prepared at the rim to alleviate the pressure on the rest of the defense to contain Lawson. He will get to the rim, it's a matter of making it as difficult as possible to score once he's there.

The Lakers will need to come out with a sense of urgency, unlike the start they had against Indiana, and have had plenty of time to recharge those batteries of theirs. Expect Mike D'Antoni to push minute totals tonight with a soft schedule this week; three total games concluding with a game against the Orlando Magic on Sunday. By namesake, this should be a great game featuring two teams that may end up battling in the playoffs once again, but on paper as it stands this could be a very sloppy game. Full of missed free throws, missed field goals, and missed timings on passes. Here's to hoping namesake gives us some great Friday night basketball.

What do our blogging partners in crime, the Denver Stiffs, have to say? Check out their take on the game tonight.

Keep your love inside the kitchen
You can feed me anything
Leave the feathers on the chicken
Peel the leather from your skin
I can be young or old
Sweet or sad, hot or cold

I will love you more than money
I will breathe you in the smoke
I will drink you in my honey
Sweet and golden down my throat
When you're right, when you're wrong
Head is near, eyes are gone
You can drown my appetite
I will sip your tears at night
You can tie me to a chair
Skin and bones, I don't care
I could be rich or poor
I don't need anymore