With about 10% of the NBA Season out of the way, the Los Angeles Lakers will now begin their journey to find their identity with new head coach Mike D'Antoni beginning with Sunday's game against the Houston Rockets. Welcome to a new periodical column here at Silver Screen & Roll that will detail what the Lakers are doing using the charts, tables, and data from the many resources on the web available.

Mike D'Antoni will be taking over the Los Angeles Lakers starting Sunday against the Houston Rockets. Only nine games into the season, he has plenty of time to discover how to squeeze the most out of his new purple and gold clad team, and it should be an interesting journey to say the least. With the uptempo offense centered pick and roll usage the Lakers should look much more fluid, and according to D'Antoni should be dropping 110-115 points night in and night out. With the top end talent featured on the team it's hard to argue against that idea.

However, nine games into the season, trends have begun to establish themselves. Jordan Hill has been an outstanding offensive rebounder, Kobe Bryant's efficiency is a joy to watch (seriously, had to dry my eyes after typing that), and Pau Gasol has been rather inefficient as a floor spreader. Every Sunday we'll pull numbers, charts, and stats from the various resources on the internet to detail not just what the Lakers are doing, but the why and how as well. So, without further adieu, let's talk trends.

It's been widely analyzed and discussed, but Kobe Bryant has been amazingly efficient to start the season. What it mainly stems from is his relentless attacking of the rim. Perhaps the German knee procedure took some time to settle in because this has been the season of Kobe driving past defenders for lay-ups. Granted, they aren't all "easy" by any means, but Kobe is showing fantastic body control even when taking contact in the paint. It's only a small sample size so far, and Kobe started last season hot from the field as well, but this is a trend that hopefully continues going forward. An efficient Kobe is a good great Kobe. 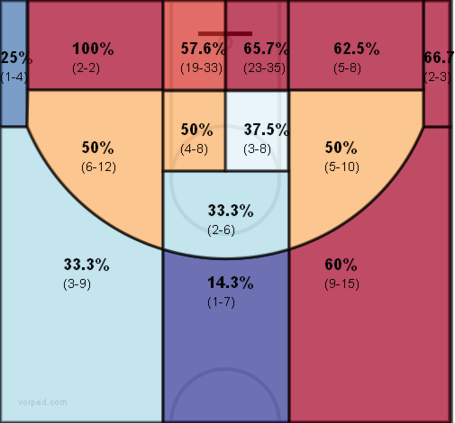 Dwight Howard will potentially be the largest beneficiary in the hiring of Mike D'Antoni. As brought up time and time again Howard was the leagues best pick and roll finisher. It's difficult to judge how deadly the Nash-Howard two man game can become considering how limited their time together has been, but adding D'Antoni into the mix certainly increases their chance of finding the supreme success envisioned when they were brought together. Currently he has only seen the ball in an extremely limited quantinty, 3 total times, after rolling to the basket. This. Will. Change. Also of interest is if his straight post-up attempts decrease with a renewed focus on screening, then rolling, then screening, then rolling, then... you get it. His defensive numbers overall have been solid. While D'Antoni's defense may worry some, he's never had the weapons he has in Dwight Howard and Metta World Peace.

Pau Gasol has yet to play a game under his new head coach and already the trade stew is being stirred. Mike D'Antoni is a coach that wants to squeeze every drop of juice out of the offensive talent at his disposal and it's difficult to imagine the Lakers would be falling over themselves to trade away the skilled big man before, at the very least, D'Antoni had the opportunity to tinker with having Pau on the floor. In Friday night's win over the Phoenix Suns Pau got off to a red hot start that wasn't flashy by any means. He stood in that 15-20 foot range, let the ball come to him, and shot the ball without hesitation. Still, his percentages from mid-range have left much to be desired, and his defense has been problematic. Seeing what Mike D'Antoni does with Pau Gasol may be the most intriguing change coming for the Lakers, though it's also just as likely that his role remains similar to what it was last season, where he essentially stood around the elbow, facilitated, and was just a mid-range spacer. The difference, though, will be the schemes in which D'Antoni tries to make the shot as efficient as possible for Pau. A final note, take a look at Pau's defensive chart. His post defense is ranked #1 in the league, allowing just .54 points per possession. While he does take plenty of heat for being problematic on the defensive side of the ball, when he's focused solely on the post he remains an elite defender. 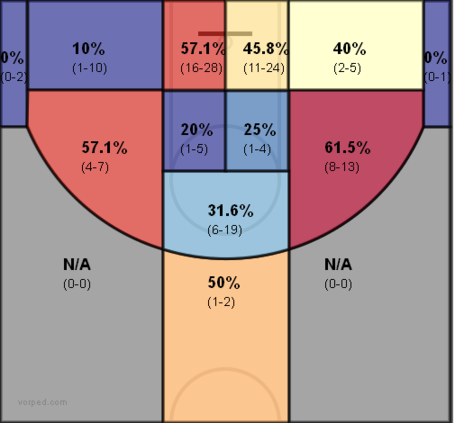 It's no secret that Metta World Peace will be a giant X factor for everything Mike D'Antoni can do to space the floor. MWP will need to bring his three point percentage up and over the 34% it's at currently to something closer to 38%. Can he? He's a career 34% shooter from deep but has accomplished that 38% or higher range twice in his time in the NBA. In fact through the season prior to the Lakers acquiring him he shot 39.9% in Houston.

The specific player that should definitely be excited about Mike D'Antoni becoming the head coach is Jodie Meeks. Under Mike Brown, Meeks hardly saw the floor in anything besides garbage time. The widely applauded off-season signing was supposed to be the backup shooting guard that could help spread the floor for Steve Nash and Dwight Howard. Currently, he's shooting a disgusting 23% from downtown on 10.4 minutes per game. His struggles can be linked to never getting an opportunity to get into the flow of the game under Brown, but with a new coach who will look to spread the floor, expect Meeks to see an increased role for the purple and gold.

What to watch: 3P%, Shot chart 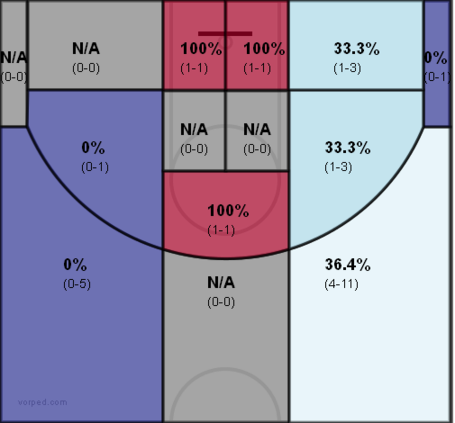 Seven seconds or less? Not quite. Mike D'Antoni dispelled the "SSOL" mantra and replaced it with his philosophy that he wants one highly efficient shot per possession "24 seconds or less". Still, he acknowledged he expects to pick up the pace a bit from the ever-clunky Princeton with the notion that the team with the superior offense should strive to tack on as many possessions as possible. Surprisingly, 39% of the Lakers shots have come within 1-10 seconds of the shot clock ticking. Still, the needle should tick a bit closer to 50% over time as a philosophy focused around pushing the ball should at least net a 11% swing.

A critical piece in the success the Lakers have found lies in their ability to crash the offensive glass. As Ben mentioned in Saturday's Beast or Burden, Jordan Hill's rebounding percentage is staggering at 24.2%. As as a team they rank 2nd in the league by the percentages, pulling in 35.6% of available misses on the offensive end. It's unlikely Hill can maintain that 24%, however, as a unit that has three bigs who are great rebounders (Howard, Gasol, Hill), there's no reason they shouldn't be able to stay in the upper echelon's of the league in this statistic.

Finally, an overall look at where the Lakers are finding their offense wraps this up with a pretty little bow. It's blatantly obvious that the Lakers are currently focused on pounding the ball into the paint. Which, thus far, has been super effective unlike Metapod's harden. 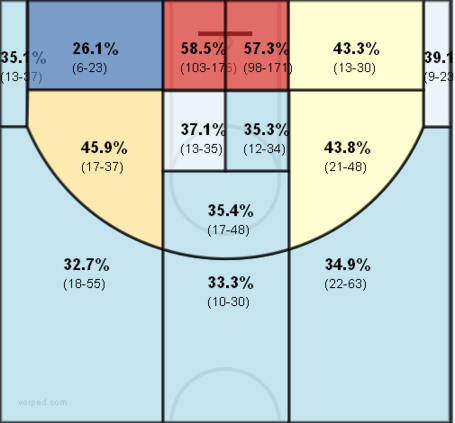 Of course, no season is complete with trying to find a way to trade Pau Gasol. The latest? A throwback Josh Smith clamoring. This trade makes almost no sense for the Atlanta Hawks, and perhaps even less sense for the Los Angeles Lakers. Sure, he's athletic, can get to the rim, can move on defense, and will possibly play split-screen Call of Duty with Dwight Howard, but floor spacer he is NOT. I'm just going to leave this here. 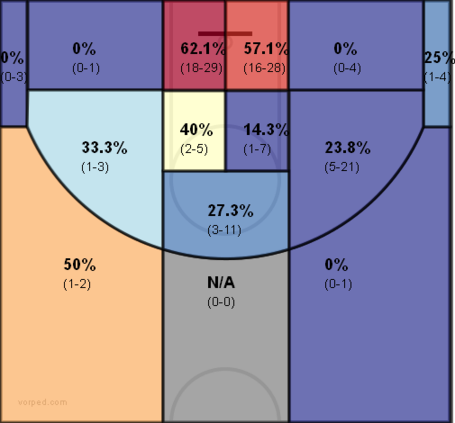 With the Mike D'Antoni era for the Los Angeles Lakers taking off tonight, everything may change for the Lakers. We'll be here at Silver Screen & Roll tracking the data and letting the numbers speak for themselves every Sunday, so be sure to check in with what we dig up and what the latest developing trend is.