The preseason's about to start, Kobe's foot is feeling better and other developments from around the Lakerverse.

I'm not going to lie to you guys: until a couple hours ago I didn't realize there's a Lakers game tomorrow. Dwight Howard won't play, but Steve Nash will. Unfortunately you won't be able to see any of it unless you live in Fresno, where the Lakers will take on the Warriors at 7:00 tomorrow night, or you subscribe to Time Warner Cable, so far pretty much the only cable provider that has the Lakers' new cable network, TWC SportsNet. This is undoubtedly the first time you've ever wished you lived in Fresno. Jon Wilner reports that TWC is asking carriers to pay $3.95 per month per subscriber. It's hard to imagine the new network won't be widely available by the time the regular season starts, but there will be more missed preseason contests.

A few other updates from the last couple days...

Nash's advancing age was a talking point when General Manager Mitch Kupchak called him in July to discuss joining the Lakers. Kupchak asked Nash if he was going to make Kupchak look bad for giving the point guard a third year on his contract, prompting a spirited response in which Nash detailed his efforts to stay in shape. "Halfway through, I had to say, ‘Steve, I'm kidding. You got the third year already,'" Kupchak recalled. 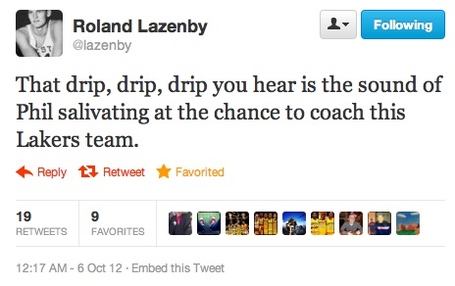