Share All sharing options for: The Best Mirror Is An Old Friend - How Kobe Bryant Sees Himself in Russell Westbrook

One of the most common questions that Kobe Bryant heard this summer during his time with Team USA was about being the elder statesman, or "O.G.", of the group. Bryant's mentor role with the 2008 team was one of the most talked about storylines prior to the Beijing Olympics and several of the players on that squad, from LeBron James to Carlos Boozer, talked about how much they learned simply by watching how Kobe prepared himself to play. Bryant frequently said this summer that he was done giving tips, though, pointing out that LeBron clearly didn't need anymore help.

Even though he said that he'd be keeping his secrets closer to his vest, the players that Bryant spent the most time around before, during and after practices were the youthful trio from Oklahoma City. Kobe may not have been giving them a peek inside of his bag of tricks, but there was clearly a relationship budding between the Western Conference rivals. It was something that caught me off guard, but as it turned out, virtually every bit of bad blood you might think these guys would have for each other was thrown out the window this summer. Those 12 players really came together under Coach K and their chemistry was the main reason they withstood Spain's comeback attempt in the gold medal game.

And yet, to see Bryant, fresh off of a tough five-game series against the Thunder, in the playoffs no less, hanging with OKC's three stars, was unexpected and unusual to say the least. It was clear to me that Durant, Westbrook and Harden's mutual love for the game was refreshing to Kobe. Whereas everyone on that 2008 team was in awe of Kobe's work ethic, the Thunder trifecta seemed to mirror Bryant's passion. After seeing the trend continue over a few days, I realized that Bryant had no problem embracing the guys that will eventually replace his Lakers as the new Western Conference powerhouse, which is the inverse of how the Celtics have handled Miami's ascension to the top of the Eastern Conference.

And there was one player in particular that Kobe seemed to relate to. You may think that Kevin Durant would be the most likely choice, since the three-time scoring champion is well on his way to breaking all of the scoring records that Kobe has set throughout his illustrious career, but it is actually Russell Westbrook who Bryant identified with most. 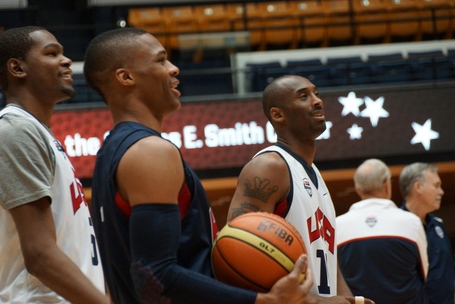 On the night that Team USA introduced their official 12-man roster for the 2012 Olympics at the Wynn hotel in Las Vegas, Kobe Bryant's and Russell Westbrook's media tables sat right next to each other. Bryant, fresh off a five-minute scrum, pushed back his chair and on his way out of the conference room, hollered over at Westbrook to let him know he was leaving.

A puzzled Westbrook fired back at Bryant, "Where are you going?"

"How long ...?", Westbrook said, Bryant interrupting him before he could finish his question.

With one foot out the door, Bryant ended the discussion: "Uh, 17 years!"

Westbrook couldn't help but smirk at Bryant's retort. Westbrook, who I can only imagine talked back a lot as a child, had just been silenced by one of the best mouth movers around.

One of the very few questions that Kobe answered that day came from me. It was about being around Westbrook and whether or not the Thunder point guard reminded Kobe of a younger version of himself. Before I could finish my question, Bryant was already nodding in agreement.

"He's ultra-aggressive," Bryant said of Westbrook." He's one of these types that you're either going to help him win or he's going to do it without you. They can criticize him all they want but shit, it worked for me, I got five of 'em."

I think Kobe is spot on with his characterization of Westbrook. Westbrook gives off the same seemingly smug look that Bryant has had on his mug for a decade, and it is abundantly clear that both players are too confident in themselves to consider what others think of them. This attitude is also evident in their play styles. Both Kobe and Westbrook tend to force the issue at times, especially if things are going rough, and neither leaves anything on the floor, possessing a seemingly inhumane ability to operate at 110% on a nightly basis. They never quit, which can be a bit of a double-edged sword at times.

Bryant is obviously at a different stage of his career than Westbrook is right now, but that makes him even more qualified to speak on someone who has come off as a young Kobe during the early stages of his career. The generation gap between Bryant and Westbrook is evident off the floor (when asked about Westbrook's exuberant fashion style in May, Kobe said that Russell "wears a lot of weird shit."), but on the floor there are moments when a swift drive or a powerful throwdown by Westbrook can make Bryant a bit reminiscent.

Westbrook has been blessed with the same out-of-this-world athleticism that made 'ole #8 so fun to watch, and he uses it to punish the rim just like Bryant did in his younger years. Westbrook also has a similar commitment to the game as Bryant, and over the past couple of summers Russell has refined his game to an all-NBA level, adding an unguardable mid-range jumper that even Kobe has to be a bit jealous of. Westbrook and Kobe are both incredibly enduring athletes, too. Bryant has persevered through a litany of injuries during his career that would have sidelined most of his peers. Meanwhile, Westbrook has redefined the term durability, failing to a miss a single game since his freshman season at UCLA (this is a testament to the immaculate shape he keeps his body in year-round).

Westbrook may never have as complete a game as Bryant has--there is essentially no chance that Westbrook ever has a post game like Bryant's--but he has all of the physical tools and skills to produce at the same level that Kobe did at his age.

In fact, Westbrook's production in his age 23 season (last season) was right on line with Bryant's production in his age 23 season (2001-02). Bryant had a PER of 23.2 in '01-'02; Westbrook had a 22.9 PER last year. In both cases, it was their fourth season as starters in the NBA and they both made the Finals those years. Bryant, of course, helped the Lakers sweep the New Jersey Nets back in '02 while Westbrook and the Thunder came up short against the Heat this summer.

And that brings us to perhaps the most interesting similarity between a young Kobe and the present day Westbrook: their running mates. Both players were paired with incredibly polarizing supporting casts and while they wouldn't be anywhere without those casts, they aren't necessarily perfect relationships.

Kobe's infamous riff was with Shaq, and their divergent pursuits of alpha dog status may have cost them each a few more rings. Westbrook's relationship with his teammates on a personal level couldn't be better, so there's nothing to worry about from a team chemistry standpoint. The problem with Westbrook's supporting cast is that it is headed by Kevin Durant, who was universally adopted as "the good guy" when LeBron was taking his talents to South Beach. Because Durant is held in such high regard, all of his shortcomings are blamed on Westbrook. Westbrook and Durant genuinely like each, so it has had no effect on their relationship. That said, Durant's overwhelming presence has prevented us from properly appreciating Westbrook's own greatness, and I'm sure Kobe thought the same thing about Shaq's large legacy looming over him.

Clearly, having Durant or Shaq as a teammate is a blessing that far outweighs any negative side effects, but you can see how something like that might bother a player over a few years as it did with Kobe. We all know how Kobe handled his situation, all but forcing Shaq out of town to ensure ownership of his own team, which he led to two additional NBA championships. It will be interesting to see how much longer Westbrook remains content about being Durant second fiddle. We've heard that James Harden flourishes and loves not being the center of attention of a team, but I'm not entirely sure that Westbrook is wired the same way. It is entirely possible that Westbrook recognizes how rare of a situation he is in and chooses to ride it out as long as he can, but it's also possible that Westbrook winds up wanting his own team down the line. 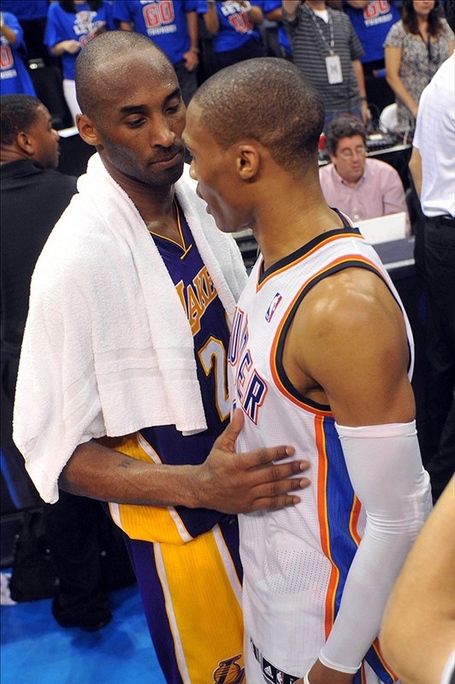 I had played with the idea before. Ever since they met in the 2010 playoffs, I had seen the similarities between Kobe Bryant and Russell Westbrook. Not necessarily in play style - especially not when comparing modern day Kobe to Westbrook - but more so in personality. Seeing them sitting next to each other (pictured at the top) after a tiring Team USA practice in Las Vegas, spit-balling about who knows what, was like seeing a classic big brother-little brother moment unfold. Just a pair of bullheaded, cantankerous and rigid NBA superstars sharing war stories, I suppose.

I'm sure a neurologist (or maybe a therapist) would be able to tell me what part of my brain is responsible for my attraction to bravado, but for now I'll just refer to it as the Kobe complex. The first time I saw Bryant play, I was immediately drawn in and he remains my favorite athlete to this day. There's just something about the defiant way that he carries himself on the floor that makes him seem extremely likable to me (the fact that he is really good at the sport isn't a bad reason to like him, either).

I get the same feeling when I watch Westbrook. I see a kid who knows that he has a lot of people waiting to pounce on any little mistake that he makes and one who couldn't care less about what those people are about to say. I see a fearless kid who is impossible to shake. No matter what the headlines say or how crucial a fourth quarter possession might be, Russell Westbrook is always going to be Russell Westbrook. And the fact that he is unwilling to appease the naysayers by changing his act makes him a more interesting player to follow, and that's the main reason why Westbrook has become one of my favorite players (that and a staring contest I once had with him during a press conference in the Western Conference Finals; he was wearing those hipster glasses, so I couldn't help but crack up first).

There are noticeable aesthetic differences between Bryant and Westbrook. Bryant has a natural fade on his jumpers while Westbrook is usually leaning forward when he launches himself into a pull-up shot. Westbrook tends to crossover with his upper body fairly straight while Bryant engages in his dribble moves with an arched back. But overall, you get the feeling that their styles are similar (speaking of a young Kobe here), which, at least to me, produces a similar aesthetic appeal.

But it's their sentimental similarities that draw them even closer together in my mind, and that's what made that little chit chat (as well as the dozens of other Kobe and Westbrook had while I was covering Team USA) that made me so intrigued about their topic of conversation. No matter what the subject of their talk was that day, I'm certain that basketball came up at some point, and if Bryant did any mentoring of Westbrook, then we're in for an incredibly fun ride in Oklahoma City this season.