Even after acquiring the best defensive player of this era during the off-season, the Los Angeles Lakers most questionable unit entering the 2012-13 season is unquestionably their defense. Even though there are a couple of important new parts that have yet to be implemented on the offensive end, one can only assume a team with the brilliant basketball minds of Steve Nash, Kobe Bryant and Pau Gasol at it's disposal will be able to figure where the ball needs to go on a given night. Defensively, however, where success is heavily dependent on one's physical abilities, this older Laker squad figures to have some trouble.

The brightside, of course, is that the Lakers did acquire the best defensive player of this era during the off-season, and Dwight Howard will certainly cure a lot of ills on defense. He's the best center in basketball at helping from the weakside and he's just as good at playing the pick-and-roll, so at the very least the Lakers have a reliable anchor in the middle of the paint. And sometimes that is all a team needs to be successful on defense, as Howard proved during his many years in Orlando when the Magic were constantly in the top five in defensive efficiency despite a roster full of defensively challenged players.

To assume that Los Angeles will immediately be able to replicate that, though, is a tad bit unrealistic. While he is known more for his offensive ingenuity, Stan Van Gundy was an excellent defensive coach that did a terrific job building his defensive scheme around Howard while minimizing the impact his lesser defenders had on the game. Mike Brown is billed as a defensive minded coach, so there is hope that he'll be able to build an effective defensive unit around Howard, but this is something that we'll have to see before it can be believed.

To borrow a theme from my initial breakdown of Howard's effect on the Laker defense: The term linebacker has been thrown around to describe the way that LeBron James controls a game defensively. If James is Ray Lewis, then Howard is Ed Reed. Howard plays a bit deeper than LeBron, protecting the rim being his primary responsibility, but he also has the versatility of a guy like Reed. In addition to keeping the opposition from getting the endzone, Howard can also effectively leave his comfort zone and stunt the opponent's running game, or the pick-and-roll attack in basketball terms. What makes the situation more interesting is that Mike Brown, who relied less on LeBron as a lockdown defender and more as prowling lion that fed on passing lanes in Cleveland, could use Howard in a similar role, allowing him to, in effect, zone off the paint by himself.

It may appear as if constructing a defensive gameplan around someone like Dwight Howard is an impossible thing to screw up, and I agree, but Brown's inability to get the Lakers to maintain a solid defensive effort last season, as well as the possibility of Howard being a bit tentative to start the season because of his back injury, gives me pause about expecting the Lakers to be a defensive juggernaut this season.

Once they've had some timed to gel together, a Nash-Kobe-World Peace-Gasol-Howard line-up should rank amongst the league's better defensive line-ups, if used correctly. Nash is far from an upgrade defensively over what the Lakers have had at point guard over the past few years, but I truly believe that it's impossible for him to be any worse than Ramon Sessions (and Synergy actually rates Nash as good when guarding the pick-and-roll; not a perfect metric, but still). And Nash will have a luxury that Derek Fisher, Steve Blake and the like didn't have: a mobile center capable of erasing some of their mistakes.

Once you get past Nash, the Lakers have a SG-SF-PF trio that has a lot of potential on the defensive side of the ball. Even though Kobe, MWP and Pau are in their 30's, they all bring something positive to the table on D.

You won't see me defending the defensive accolades that Kobe has picked up over the past few years but I also think that the reaction to Bryant being on the first and second all-defense teams has made him a bit underrated on that end of the floor. Here's the thing about Kobe: When he's not guarding someone that will actively posses the ball, he's pretty awful. According to Synergy, of players that guarded at least 200 spot-up possession last season, Kobe gave up the fifth most points per possession (LeBron was right behind him at sixth). For whatever reason, he loses focus when he's on a spot-up shooter and does a poor job closing out. 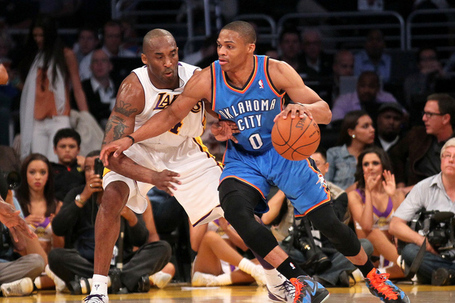 But when Kobe is assigned to someone who will actually handle the ball on offense, he's still a very respectable defender. One of the main reasons the Lakers were able to capture the 2010 NBA Title was Bryant switching on to Rajon Rondo while poor Derek Fisher chased Ray Allen around for 40 minutes a night. The Lakers implored a similar strategy earlier in the playoffs that year when Bryant guarded Russell Westbrook instead of Thabo Sefolosha. Bryant guarded 41 pick-and-rolls during the 2012 post-season and he held his man to 21% shooting in those situations. Keep in mind, the majority of those possessions came against James Harden, Russell Westbrook and Ty Lawson, so that's a pretty impressive stat. Kobe also held his man to 34% shooing in isolation situations during the regular season.

So when Bryant is given a tough assignment, he can still be relied upon to produce at an above average level, or, at the very least, an above (insert Laker point guard here) level. Switching Bryant onto the opposing point guard still appears to be the Lakers best course of action when they reach the post-season, though such a strategy may not work against the Thunder when they have James Harden in the game.

Even though his reputation has taken a bit of a hit in the past couple of years, Metta World Peace is still a good defensive player. His offensive woes are so obvious that he always seems like a liability, but he still has the ability to cover his man one-on-one. And with MWP coming into camp in very good shape this year, I think we can expect him to be a bit quicker on his feet defensively this, which would be huge. He held his own in the pick-and-roll (37% shooting allowed) and isolation (33% shooting allowed) last season and his new physique should only make him better this season.

Pau Gasol has always been one of the league's better defensive players. He won't make any highlight reel plays on that end of the floor but he's an incredibly smart player that knows where he needs to be on the floor and plays to his strengths. Now that he has a big man counterpart that is capable of protecting the paint by himself, Gasol's defensive production will be more noticeable because he won't be forced to do two different jobs at once. His numbers against the pick-and-roll, post-ups and spot-ups were all very good according to Synergy and Gasol is a reliable rebounder, which means the Lakers will surely have the most complete power foward-center combination in the league.

Behind their star studded starting cast the Lakers have compiled what appears to be a deep and reliable bench. While most fans are excited about what Jodie Meeks, Antawn Jamison, Jordan Hill, Devin Ebanks and a few others can provide offensively, they also provide some much needed defensive depth. Well, with the exception of Jamison that is. To be blunt, Jamison was the worst defensive player in the league last year. Perhaps playing for a contender will make him play a bit harder, but he's going to be a net negative on defense when he's on the floor.

Outside of Jamison, though, Los Angeles bench will provide solid defensive relief for that aging starters.

Jodie Meeks played very hard on defense under Doug Collins and his effort was rewarded by very solid metrics in nearly every defensive category. He's not someone you want on an island against a top scorer, but he'll fight around screens and close out strong on his man. Because Meeks is a solid two way player Mike Brown should be able to trust him with a significant amount of minutes this season, which is a good thing for Kobe's knees.

It only took one game - that epic double overtime win over the Thunder - for Laker fans to catch on to the value of Jordan Hill last season. The seven footer has quick feet that allowed him to hedge effectively on pick-and-rolls and he was an extremely energetic rebounder. I'm sure all Laker fans are glad the team held onto Hill rather than signing another Troy Murphy-type to a minimum deal. Hill's hustle points will swing a few games for Los Angeles this season and having a scrapper like him to complement an exterior threat like Jamison on the bench unit is a very nice fit. 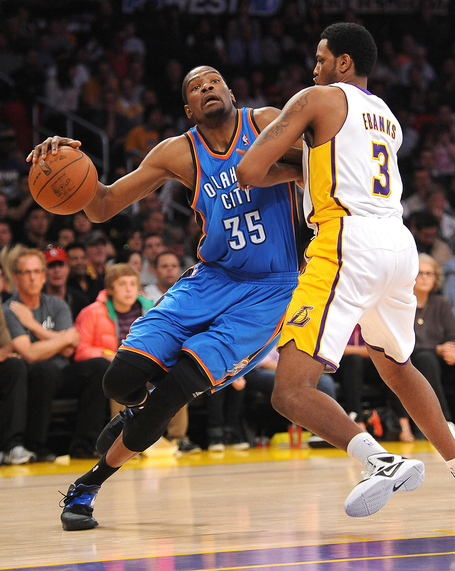 With Matt Barnes gone, Devin Ebanks figures to have the back-up small forward job to himself and I am looking forward to see how it goes. I thought Ebanks played very well in his spot starts last season and I think he can be a valuable defensive asset for Brown to use. Ebanks appeared capable of handling stars in stretches and even though he was a bit over zealous when guarding screens, his one-on-one work was very impressive for a young player.

The defensive wildcard for the Lakers this season is Earl Clark, who was acquired from the Magic in the Dwight trade. The 6'10" combo forward has not lived up to the Lamar Odom comps he received when he came out of Louisville (I really had high hopes for the Clark/Terrence Williams combo back in 2009) and he never found a consistent role with the Magic. Clark isn't likely to secure a role with the Laker this season but if any injuries arise or someone underperforms, Clark may be forced into duty. Clark rated out horrifically defensively last season but he clearly has the physical tools to be an effective stopper. If someone on the Lakers' coaching staff can get to Clark and if he has the drive to improve his game, Clark could be a useful tool off the bench.

From the outset, it appears as if Howard will save the Lakers defense this season. Several things need to be ironed out, including Howard's own health status, but by year's end Los Angeles should have one of the five best defensive efficiencies in basketball. If the Lakers aren't able to meet that standard by year's end, I think we'll need to take a long hard look at the performance of Mike Brown. Moreso than anybody else, it is Brown who will be counting on Howard to be his defensive savior this season.

Stats from Synergy Sports Technology were used in this post.