Share All sharing options for: Lakers/Rockets: Lessons in Balancing Dominance

Yesterday's game between the Lakers and Rockets, aside from being an enjoyable romp of a borderline playoff team, represented an interesting confluence of narratives that we have not seen so far this season. It was a paean to an aging but still effective superstar in Kobe Bryant, yet also a demonstration from Andrew Bynum why he clearly is at least the second best center in the league and a virtual lock to be starting for the West in Orlando should he continue this level of play. Meanwhile, Pau Gasol slid nicely into a supporting role, and the rest of the Lakers' role players filled in the gaps. Of course, we can poke plenty of holes into that tidy picture, which otherwise describes a championship contending team, and indicate where the Lakers need to go to get to that juncture.

Yours truly was fortunate enough to attend the game, and bereft of my usual game-watching complements -- the invaluable Yahoo! Sports or ESPN box score, my Twitter timeline full of basketball peeps, television replay for things other than a Laker scoring, and of course, the SS&R game thread -- it was certainly a different, albeit still gratifying experience. Armed only then with my senses, a few cups of beer, and my very basketball savvy uncle, whose commentary and feedback made breaking down every play a joy, I present my impressions after the jump, as well as how the team can move forward: 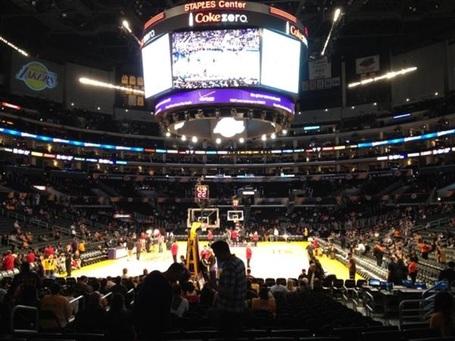 Above was my view of the game, which was generally great and makes me regretful that I left my camera in Princeton, or else I would have a photo library for this game. Next time I suppose. In any case, taking a leaf from wondah's book -- and reflecting how disorganized these thoughts are -- the following will be presented as bullet points: