What Happened to the Lakers Shooting?

Share All sharing options for: What Happened to the Lakers Shooting?

On the slight chance you haven’t noticed, the Lakers are currently dead last in three point shooting this year. They have made only 69 of their 268 attempts, a rate of 25.7%. The fact that last night’s poor 6 for 20 from behind the arc counts as a good shooting night for the purple and gold speaks volumes about just how abysmal this has become. The Lakers haven’t always been a poor three-point shooting. Just a few seasons ago, when Pau Gasol was acquired, the Lakers finished 6th in the league in three point shooting percentage. However subsequent seasons saw the Lakers long range assault sputter to the point that it derailed their quest for a three-peat last season. This season was supposed to be different though. The Lakers used virtually every acquisition to bring in guys who can stretch the floor. So why is it not paying off? Let’s take a look at how the Lakers went from 6th to 30th in a span of 5 seasons and then what it means going forward.

How we got here:

The 2007-08 Lakers were a surprise team that season even prior to the Gasol trade. The emergence of a legitimate big man in Andrew Bynum coupled with the three-point shooting abilities of many of the roles players had the Lakers fighting for a top seed in the West. When Bynum went down with a season ending injury and Gasol was acquired everyone forgot how good they had played up to that point in the season. When Gasol put a Lakers jersey on for the first time he joined a team that was 30-16 (on pace for a 54 win season) and a big reason was the Lakers new found ability to punish teams with the three-point shot.

Here is a chart showing the three point percentages for each of the main shooters on that roster. The width of each column represents the percentage of the team’s attempts that each player took and is charted in descending order. 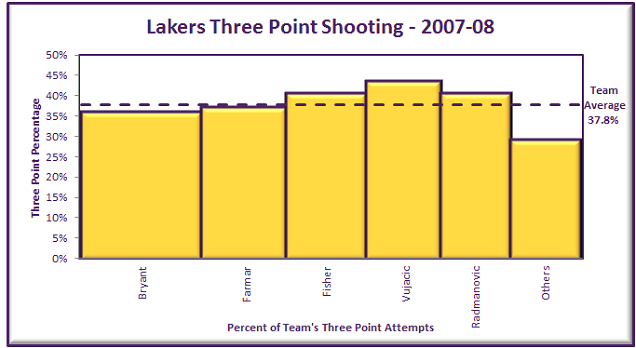 For example, Kobe Bryant took the largest percentage by far, making 36% of them. Farmar was second in attempts converting 37% of them. The team as a whole made almost 38% of their attempts that season. That translates into the equivalent of shooting nearly 57% on two-point field goals. It truly was a devastating piece of the 3rd most efficient offense in the league. There are two reasons the Lakers shot such a high percentage as a team:

The Lakers had three shooters make over 40% that season: Derek Fisher (40.6%), Sasha Vujacic (43.7%), and Vladimir Radmanovic (40.6%). Farmar and Kobe were also pretty good shooters that year. This group of players combined to take 86% of the three point attempts, limiting the negative impact of the non-shooters who make the "Other" group in the graph (primarily Lamar Odom, Luke Walton, and Trevor Ariza).

Fast forward to the next season (2008-09) and on the heels of a NBA Finals loss to a more physical and defensive oriented team in the Boston Celtics, the Lakers begin to make some roster changes. The Lakers shipped out Vladimir Radmanovic mid-season to save money and increase playing time for the younger and more capable defender in Trevor Ariza. Farmar’s weaknesses on defense led to a small reduction in minutes but a huge reduction in confidence and willingness to shot the three. Vujacic also had a regression as he certainly couldn’t maintain a shooting percentage like the year before. The result is that not only do several Lakers have worse individual years, but the distribution of shots changes. 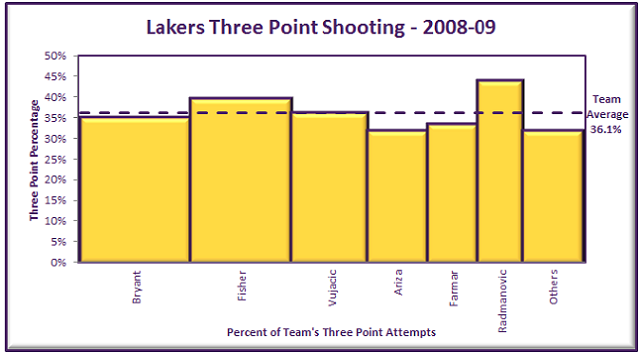 The Lakers now have a non-shooter in Ariza and a struggling Farmar taking shots that were previously being taken by guys like Radmanovic. In one season the Lakers go from making 37.8% of their threes to only 36.1%, falling to 19th in the league.

In the end the Lakers were able to catch lightning in a bottle when in the playoffs Trevor Ariza, Lamar Odom, and Shannon Brown each made over 47% of their three-point attempts to help lead the Lakers to a championship. While no one would complain about winning a championship, the way in which it was done proved to be fools gold that had a dramatic effect on the Lakers personnel moves the following season.

The following summer Ariza was able to convince Houston that his new found stroke was not just a hot streak and parlayed it into the maximum mid-level salary. The Lakers, being somewhat wise, did not overpay but instead acquired Metta World Peace to fill the void. World Peace has historically been a better defender and shooter than Ariza so this was a smart move. Unfortunately not all moves were the wisest in hindsight. While the Lakers felt that Ariza’s hot streak was simply that and nothing more, they apparently felt that Shannon Brown could actually play and proceeded to give Vujacic’s minutes to Brown. 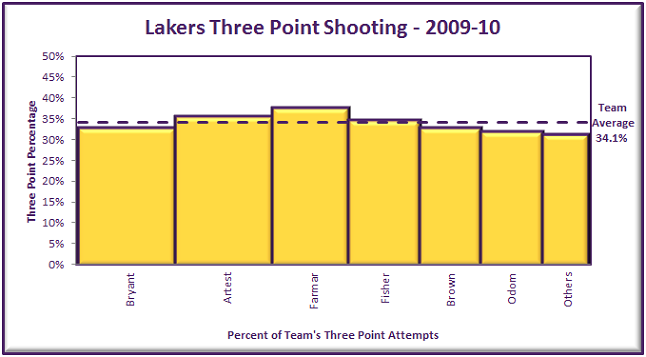 The 2009-10 season saw the Lakers three point percentage drop again to only 34.1%. Two new names emerged on the list of players to take a large share of the threes, Lamar Odom and Shannon Brown. No longer on the list from a few seasons prior were sharpshooters Vujacic and Radmanovic. The Lakers overcame these limitations and exacted revenge on the Boston Celtics to win a second straight title.

The following offseason the Lakers lost an unhappy Farmar and replaced him with the far better Steve Blake. Unfortunately, whether it was a lack of confidence or understanding of the triangle, the Lakers best three-point shooter seemed hesitant to shoot the three. He ended up taking fewer attempts than Artest or Brown, both of which are also role players whose job it is to catch and shoot on offense.

Further hurting the Lakers that season was a hot start by Shannon Brown. Brown started the year on fire and it wasn’t long before the front office decided it would be in the team’s best interest to move Vujacic and his contract and give the minutes to Brown full-time. It wasn’t long afterwards that Brown’s streak ended and a cold spell began. He proceeded to struggle the rest of the season while Vujacic flourished with his new team. 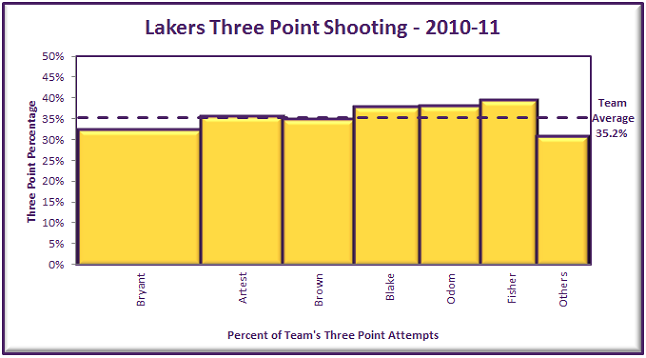 The Lakers finished the season with a slightly better three point shooting percentage of 35.2%. The main reason for the increase was the hot start by Brown and a career year from Odom that screams "fluke" like no other season. When both players came crashing down to reality in the playoffs, so to did the Lakers dreams of a three-peat as they were quickly dismissed by a Mavs team that seemingly couldn’t miss from beyond the arc.

Much like the Lakers last playoff exit, the front office looked at the team that eliminated them and basically said, "We need more of that". When Boston eliminated the Lakers it set the stage for the evolution away from non-defensive sharpshooters (Vujacic and Radmanovic) towards more defensive oriented players (Ariza and then World Peace). When Dallas eliminated the Lakers it shifted the focus back to the need to acquire shooters again. The Lakers signed Jason Kapono who one could easily argue is a worse player than Sasha Vujacic. With minutes and confidence Sasha could shoot the ball with the best of them and his defense, while not great, is vastly superior to Kapono. They also signed Troy Murphy as a floor spreading power forward who doesn’t play much defense. He essentially fills the role the Radmanovic had a few seasons ago. In a twist of irony Radmanovic is currently shooting over 40% from beyond the arc this season on nearly 4 attempts per game in Atlanta and is posting the highest PER of his career (and much higher than Murphy’s currently).

The Lakers have taken the long route but their current roster resembles a similar make-up as that 2007-08 team that was the 6th best team in the association at shooting the ball. So why are the Lakers now dead last instead?

What is wrong this year:

This gets back to the two reasons for team success shooting the ball. You first need to have shooters (which the Lakers do) and the second piece is that you need them to shoot.

The Lakers have a roster filled with great shooters, unfortunately they just aren’t shooting the ball and when they do they aren’t shooting it well. In that 2007-08 season the combination of Vujacic and Radmanovic combined to take almost 30% of the three-point attempts. The current pairing of Kapono and Murphy has taken roughly 10%. In fact, Pau Gasol’s (11) attempts aren’t far behind Murphy’s (13) and not far from Kapono’s (17). The only sharpshooter on the roster that seems willing to pull the trigger with regularity is Steve Blake, but he will now be out of the line-up for extended time as his chest heals. 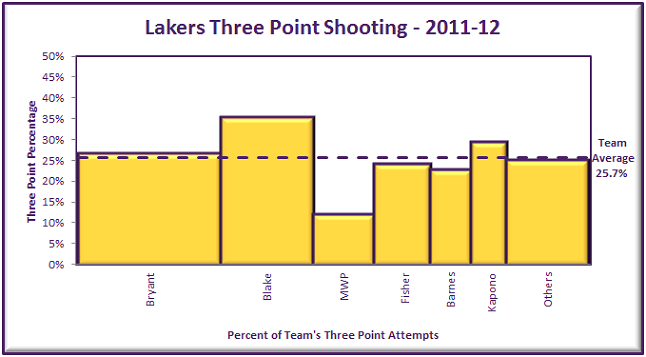 In addition to the newly acquired shooters not shooting, the old guard (players that have been the roster a few seasons) are more than willing to take the shots and for reasons unknown can’t seem to make any of them. The combination of Bryant, Fisher, and World Peace have taken over 50% of the three point attempts and made only 23% of those. It is one thing to have a small dip in shooting but this leaves me at a loss for words. These are three veteran players whose three point abilities are well established and they are all proceeding to set an unprecedented drop in three point percentage without any reason to account for it. Perhaps Kobe’s wrist could be a reason but he is making shots from 15 to 20 feet at a rate just as high (if not higher) than in years past. The odds of Kobe going through a stretch like this based on his career 3P% is once every 2.7 seasons. The odds of Fisher going through a stretch like this is once every 4.5 seasons. The odds that World Peace, a career 34% three point shooter, going 4 for 33 is once in 215 seasons. The odds that all three of them do it simultaneously would be roughly once in 2,500 seasons! It certainly can’t continue and perhaps this little road trip's 8-22 (36%) is the beginning of a more normal shooting percentage, but just because they return to normal won’t mean the Lakers will be a great shooting team again.

Here is a chart showing the Lakers shooting percentages for their career with the current season’s shot distribution. 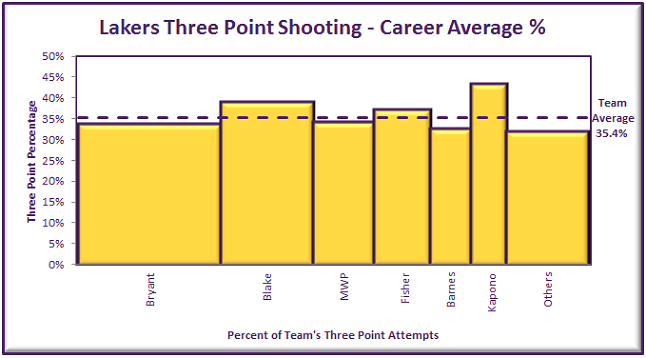 If every player reverted back to their career average the Lakers would be expected to make 35.4% of their attempts. It certainly is a vast improvement over the 25.7% they are making currently, but it would still make them a roughly average three point shooting team. If the Lakers want to be a really good three point shooting team then they need to also correct the distribution of attempts, most likely fewer for Bryant, World Peace, and Barnes and more attempts for Blake, Fisher, Kapono, and Murphy.