This Week in the Lockout: Presidents, China, and Lockout Doldrums

Share All sharing options for: This Week in the Lockout: Presidents, China, and Lockout Doldrums

Hello, ladies and gents. With Dex occupied this week with taking over the world traveling, yours truly will be taking over this edition of This Week in the Lockout. Hopefully, the return of football has alleviated some of your woes as the NFL continues through preseason, or else it is further driving in the cold, hard reality that basketball is stuck in a lockout with no end in sight. If you previously were not into football, now would be a great time to make that proverbial jump and find at least some way of enjoying a possible missed season. Anyhow, after the jump, we will look at the current status of the labor negotiations, what many of your favorite Laker players are doing as of late, and an important development in the universe of Chinese basketball. This will be brought to you in my meek and rather humorless attempt to mimic Dex's one-man Socratic dialogue, as I am sadly inept before Dex's mighty comedic prowess.

Are we still in a lockout?

Dammit. Hey, wait, did you shamelessly copy the opener to one of Dex's previous dialogues?

Told you I was bad at this kind of thing. I'm a history major; what do you think I'm writing most of the time?

Okay, whatever. Any progress reported this week?

Not much as of now. The union continues to wait on the investigation by the National Labor Relations Board, which could be done by next week or so. Should the NLRB agree with the players' union that the owners were negotiating in bad faith, they could get an injunction to lift the lockout, which would force the owners back to the negotiating table with a weakened position. As the union is still reluctant to decertify, the path taken by the NFL players' union, there's not much to do until the results of the investigation come back. It's far too early in the process for either side to be feeling any significant pressure to compromise, seeing as we haven't even gotten to the start of training camps yet.

A report from Ken Berger this week confirmed as such, along with the fact that Kobe and Paul Pierce made a plea to a group of about 75 players to stay united behind the union. At this juncture, it's pretty easy for that message to be accepted by everyone involved, as we haven't missed any paychecks that might expose major fissures within the union.

Huh?!? Kobe and Pierce speaking together and presenting a united front? What the hell is going on?

The message of unity would be emphasized if it was coming from the players of the two teams with the deepest rivalry in the NBA, no? Not sure how that decision came about, but you have to imagine that it was intentional.

Ugh, that makes me sick. Give me something to soothe my anger, dude.

Mkay. Although most members of the media attributed Boston's decline to the Perkins trade, Shaq presented a different opinion in his new book, Shaq Uncut:

In early March some of the guys went to the museum of Fine Arts for a fund-raiser and got to hang with President Barack Obama. Everyone was a little bit in awe. The President turns to Ray, points at Rondo, and says, "Hey, Ray, why don’t you teach this kid how to shoot?" Everyone starts laughing.

KG told me he saw the look on Rondo’s face and the kid was devastated, embarrassed. Dissed by the President, even though I’m sure Obama didn’t mean any harm. Rondo smiled and went along with all of it, but KG told me he could see it in his eyes. It bothered Rondo. It killed him.

The next day Rondo shot the ball horribly. He stopped taking shots after that. He’s so sensitive. I think it was a real jolt to hear the outside perception of a basketball fan who happens to be the President of the United States. It messed with his mind. I’m sure of it.

So yeah, being zinged by the President killed Rondo's confidence and derailed the Celtics' season. Whether you trust Shaq's credentials as a psychologist or not, that's still a highly entertaining turn of events.

Whoa. I think Obama just earned my vote next year.

This blog does not discuss politics as a matter of course, especially not endorsing specific candidates, although you are free to use that as a reason if you wish.

Man, you're such a killjoy. So what else was Kobe doing this week?

As you probably saw already, Kobe was showing his stuff at the Drew League, scoring 43 points along with a sweet game winner over James Harden. He also revealed that he has added Dirk's one-legged fadeaway to his already considerable arsenal of shots, a development that hardly seems out of the ordinary for Kobe. Knowing his body better than anyone, he probably realized that his regular fadeaway was increasingly rendered ineffective due to his knee and ankle injuries limiting his vertical, so he added a shot that requires hardly any lift to create separation. Should we really be surprised anymore at this stuff?

Well, it initially looked like Kobe had a $1.5 million/month on the table to go play in China, but that was shut down by the bigwigs in the Chinese government who released on Thursday a new rule that locked out players from the NBA under contract can't play in the Chinese Basketball Association. The professed reason is that they don't want to undergo any turmoil by having a bunch of NBA stars pick up shop and leave midseason and leave the league in shambles. That and with the Olympics coming up, they want to devote more attention to their own athletes. Might be also to avoid another fracas like the fight between a Chinese team and Georgetown that occurred in an exhibition game.

Ouch. But isn't that a bit moronic? All these teams have foreign players coming in and out all the time like Stephon Marbury and Bonzi Wells (lol!) and at least they get a few months of big, positive publicity for what normally is by all accounts a third-rate league with rampant corruption and whatnot that's going nowhere. Not to mention that all these clubs would benefit from the huge merchandise sales and increased image that they would garner as a result. Sounds like this is something coming from on high and driven by some nationalistic bent than any business perspective or similar.

Took the words right out of my mouth, man.

Sweet. Well, how about everyone else on the team?

Pau is playing at the Eurobasket as part of the Spanish national team. Bynum has declared that he's not going overseas and is training at Freddie Roach's boxing club while also taking piano and Spanish classes. Artest might have hit a snag in his desire to become part of a British soap opera join the Cheshire Jets due to the somewhat obvious problem of finding someone to insure the remaining $22 million on his contract. However, the Jets are reportedly working furiously to find some way of making this work, and given the positively gargantuan comedic factor at stake, we wholly support them. Andrew Goudelock is also apparently "seriously considering" offers in both Spain and Germany. As a rookie, this is a particularly good opportunity for Goudelock, as he's already missed on valuable playing time in summer league, and if he's able to play abroad during any possible missed season, it can only have a positive effect on his development. Indeed, one could argue that getting some decent playing time with a foreign team would be better than riding the bench during the regular season and getting reps in the D-League, so it would be great if Goudelock could seize the opportunity to do so.

Good stuff. Well, anything else to wrap up?

The Lakers have hired Eric Musselman, a former head coach with the Warriors and Kings, to be the head coach of the D-Fenders, the Lakers' D-League affiliate. This is another sign of a further break with the Lakers immediate past, as with Phil, the Lakers implemented the triangle with the D-Fenders, which required scouring the nation for a random bloke who happened to know it. With Brown in the top job, the Lakers are free to have a much more conventional hire, and Musselman certainly has solid credentials for the league he is coaching in. As Morris, Ebanks, and Goudelock are definitely going to see some playing time in the D-League, it's nice to know that there will be a competent coach overseeing them. Barring injury, it's highly unlikely the Lakers ever take a call up from their squad, but it's a good move nevertheless.

Alright! Now, what everyone has been waiting for!

What do you think? It's the only reason anyone reads these things anyways, right?

Why cats? Why not a momonga? 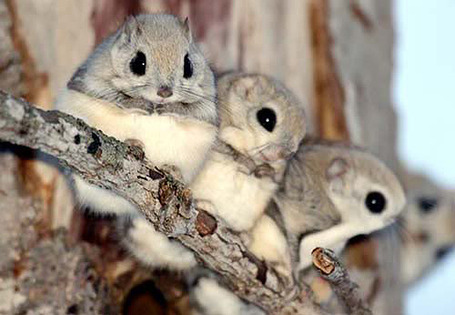 Fine, fine. There you go: